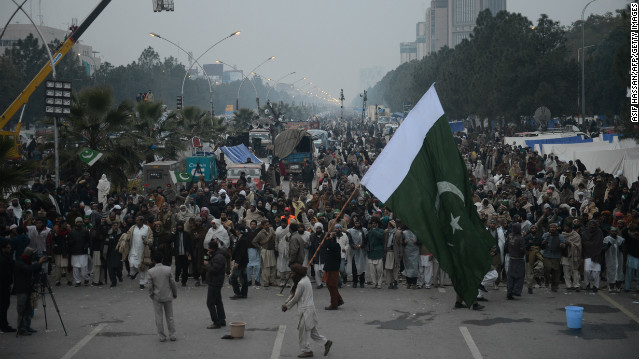 The myth of an Arab Spring in Pakistan

By Michael Kugelman, Special to CNN

Editor’s note: Michael Kugelman is the senior program associate for South Asia at the Woodrow Wilson International Center for Scholars in Washington, DC. You can follow him @MichaelKugelman. The views expressed are his own.

Will Pakistan experience an Arab Spring? The question has been on many minds since revolution swept across the Middle East and North Africa in 2011 – and especially since a major anti-government rally took place in Islamabad this month.

It's easy to understand why. Pakistan, like the Arab Spring nations, boasts a young and mobile communications savvy population. Its masses are victims of the same indignities that incited revolt in the Middle East: corruption, oppression, and injustice.

However, the similarities end there. Let’s stop talking about a revolution in Pakistan, because it’s not going to happen.

It’s tempting to think Pakistan harbors revolutionary impulses. In recent weeks, a cleric named Tahir ul Qadri led a march to Pakistan’s capital that he vowed would culminate in the fall of the government. Tens of thousands – including women and children – camped out in Islamabad to cheer Qadri’s fiery anti-government speeches.

Yet this story yielded a decidedly counter-revolutionary denouement. Qadri stepped off the stage and entered into negotiations with government officials. The outcome? An “Islamabad Long March Declaration” calling for the government to be dissolved by mid-March, and for a caretaker government to take over until elections are held within 90 days of the government’s dissolution. This is actually the direction the government was moving in before the march – part of a constitutionally mandated transition process for election years, and 2013 is one such year.

More from GPS: Yes, it could get worse

In effect, the chief revolutionary signed a backroom deal with the state that left everything in place – and his supporters literally out in the cold. Not exactly a scene from Tahrir Square.

In Pakistan, power is about personalities, not people. Pakistanis frequently gravitate toward charismatic politicians who, messiah-like, vow to single-handedly rid the nation of its afflictions. Yet these leaders often come across as mere pawns of Pakistan’s established power brokers.

Take Qadri. He is known for his galvanizing anti-government rhetoric, but he also supported Pakistan’s military coup in 1999, and expresses pro-army views. Tellingly, the Long March Declaration stipulates that his political party help select a caretaker prime minister. This has all fueled speculation that his march was engineered by Pakistan’s powerful armed forces to deepen their behind-the-scenes influence over politics.

Meanwhile, Imran Khan, a former cricket star contesting this year’s elections, often resorts to crowd-pleasing populist rhetoric, such as vowing to end corruption in 90 days. Yet he has struggled to shake the perception that his campaign has been sponsored, if not bankrolled, by Pakistan’s security establishment.

Be this as it may, there’s no denying the extraordinary ability of these charismatic figures to mobilize the masses. Khan has drawn huge crowds – some estimate as many as 500,000 people – to his campaign rallies. Qadri attracted tens of thousands to his march even though he’s lived in Canada for the last seven years.

So imagine for a moment that a truly independent charismatic leader materializes, one with no strings to be pulled, and who genuinely desires to precipitate a people's revolution. Could such a figure’s prodigious mobilizing abilities launch a mass movement for change?

Don’t count on it.

Why? Because mobilization is only a first step toward launching a revolution. The other steps – identifying core objectives and strategies, and them implementing them through mass action – are non-starters in Pakistan because the nation is too riven by division. Ethnic, provincial, and sectarian tensions are rife, effectively negating any hopes for unifying around a common cause, much less a leader (Khan is a deeply polarizing figure). Sunni-Shia cleavages run deep, and fractures between Sunni Barelvis and Sunni Deobandis are sharp. These religion-based fissures should put to rest any talk of an eventual Iran-style Islamic revolution.

It’s not just Pakistan’s fractures that inhibit mass movements for change. Thanks to the power of patronage, many everyday Pakistanis are allergic to actions that threaten the status quo because this could imperil the influence of friends and other patrons who help them get by in Pakistan’s unmeritocratic society.

Some may argue that Pakistan doesn’t need an Arab Spring because it has already experienced something approximating one – a pro-democracy movement in 2007. Lawyers, journalists, and students launched a campaign against the draconian policies of President Pervez Musharraf, which led to his resignation the next year and to an era of democracy that has shakily endured to the present day.

Still, while that movement may have produced democracy, it has failed to overhaul the oppressive culture of corruption and impunity that continues to enrage the Pakistani masses today. Sadly, this culture is unlikely to be eliminated anytime soon.

As the Qadri march wrapped up, local media reported that poor hygiene conditions had sent more than 90 sickened participants to the hospital. Social media reports (albeit unconfirmed ones) claimed that several people had died.

What a tragic yet appropriate coda in a nation where people’s privations, not people power, carry the day.

Next entry »What's been burning in Greece?
« Previous entryDoes Jordan's election change anything?