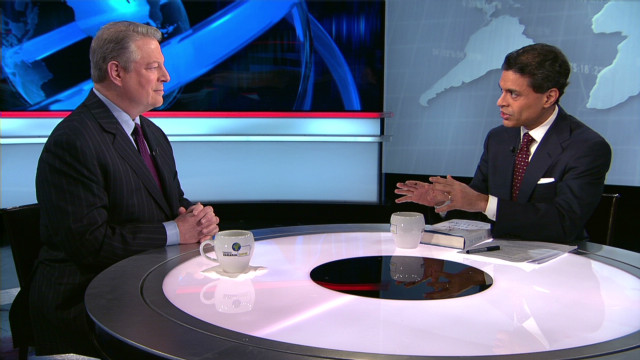 Gore: Democracy in America has been 'functionally corrupted'

Fareed speaks with former U.S. Vice President Al Gore about democracy in the United States and why he thinks the campaign finance system needs an overhaul.

You feel as though a combination of special interests and money have essentially completely corrupted democracy in America.

Functionally corrupted it, yes. You know, we’re told that corporations are people, that money is speech and that might makes right. And we know all of [these] things are contrary to what the United States of America is all about. But because our elected representatives now have to spend most of their time begging rich people to give them money, begging corporations and special interests to give them money, they spend more time worry about the effect of their actions, votes and speeches on these big donors, some of them anonymous, than the time they should be spending thinking about how to serve the interests of the publics they represent.

And you were in the Senate. So when you are raising all that money, when – it's gotten much worse since you were there – those people are expecting certain lines and regulatory codes, lines in the tax code, correct? They’re not paying $50,000 to have breakfast with a congressman because of his personality.

No, not at all. Some of them still do that, I’m sure. But the request for a quid pro quo has become routinely far more brazen than was the case in the past. Fundraisers are often scheduled by special interests according to the legislative calendar when particular bills come up. The same conversations involve legislation and fundraising. Now there are exceptions. There are many honorable men and women. Don’t get me wrong. But there are good people trapped in a very bad system now.

Absolutely. It's difficult to accomplish, but when I ran for president – both times I ran for president – my platform included 100 percent public financing for all federal elections. That's a tough thing to accomplish. But we have got to get big money and anonymous donors and special interest out of the catbird seat. They are now driving the political system. The Congress now finds it virtually impossible to pass any kind of reform unless they first get permission from the special interests who are most involved with the issue involved and who finance their campaign. And that’s pitiful.

Topics: Politics • United States
Next entry »Did you have more cash than Zimbabwe's government last week?
« Previous entryCan Turkey seize the ‘Kurdish card’ for itself?

Next entry »Did you have more cash than Zimbabwe's government last week?
« Previous entryCan Turkey seize the ‘Kurdish card’ for itself?

9:58 am ET January 19, 2021 RETWEET
It’s not just Trump, it’s tribalism, the breakdown of shared reality, and the power of the Senate. Frtwitter.com/i/web/status/1…w4o9ez
fareedzakaria

9:42 am ET January 19, 2021 RETWEET
America's brush with fascism—and how we can stop the country from sliding into it. My conversation w/twitter.com/i/web/status/1…SWz6
fareedzakaria