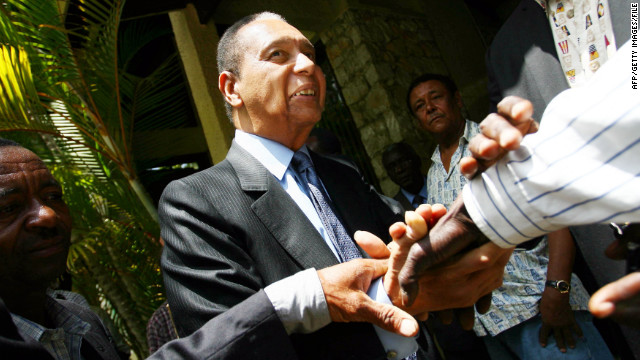 Is Haiti's justice system up to the test?

By Javier Zúñiga, Special to CNN

Editor’s note: Javier Zúñiga is a special advisor at Amnesty International. The views expressed are his own.

Bringing to justice current or former heads of state is always complicated – in both legal and political terms. But it is possible. Time and again, former dictators and human rights abusers have been tried and convicted in countries across the world.

But in Haiti, where the judiciary still suffers from structural deficiencies inherited from the dictatorship years, bringing former President Jean-Claude “Baby Doc” Duvalier to justice over his alleged responsibility for crimes such as torture, killings and disappearances during his time in office is proving particularly challenging.

The former leader showed contempt for the justice system and victims by failing to appear at two previous hearings for his alleged involvement in those crimes. On February 21, he is due to appear in court again. Yet the backdrop to the case sees Haitian authorities showing little real interest in pressing for Duvalier to be held accountable for his actions. Indeed, in several public statements, President Michel Martelly has hinted at pardoning Duvalier. Meanwhile, the former Haitian leader has continued to take part in public events, despite having being placed under house arrest while charges against him are investigated.

Just as troubling, Duvalier was recently granted a diplomatic passport, a further sign that other powers of the state are inclined to ensure impunity from prosecution for the former dictator. This is despite the fact that there seems sufficient evidence to prosecute Duvalier for widespread arbitrary detentions, torture, deaths in custody, killings and disappearances that took place under his regime.

I will never forget visiting Haiti in 1983. Duvalier had been in power for more than a decade, and there were widespread reports of terrible human rights abuses across the country. One of the people I met there was Yves Richard, the then-secretary general of the Autonomous Confederation of Haitian Workers. He had been arrested in December 1980 for alleged “political and subversive activities.” During our conversation, he told me about the abuses he had to endure.

“I was kept completely separate from the other workers and transferred to the underground cells hidden below the National Palace, where there is no daylight,” he told me. “Thanks to the electric torch of the prison guard, however, I was able to distinguish skeletons, probably those of former prisoners, lying there on the ground. It was like living a nightmare inside a mass grave under the National Palace.”

As we documented at the time, during Duvalier’s years in power, abuses against political detainees in Haiti typically began with the victim being arbitrarily arrested and then subjected to long-term incommunicado detention without charge or trial – before sometimes being extra judicially executed or disappeared.

People were tortured in prison, military barracks and police stations. Some local police chiefs even ran small detention centers, sometimes in their own homes. Some detainees were beaten with sticks, forced to stand for very long periods or tied in the position known as the parrot's perch – where a victim is suspended from a bar while their wrists are tied to their ankles (“djack” as torturers of the time called it).

Many political prisoners died while in custody, as illness and a lack of food and sanitary facilities were common.

It is true that Jean-Claude Duvalier’s case might be a headache for Haiti’s justice system, but it is the test through which the judiciary’s credibility and independence will be assessed. Bringing to justice those responsible for past human rights violations will ensure that those in power now will be disabused of the notion that they can act with impunity.

And, despite all the delays, I still haven’t lost faith in the capacity of the Haitian judiciary to do what most believe impossible. The court’s recognition during the previous hearing of the victims and their lawyers as civil claimants, despite an explicit request from Duvalier’s lawyer not to do so, is a small but encouraging step in the right direction.

People like Yves are there to testify to the incredible suffering they had to endure, and all the Haitian courts have to do is to let the victims speak.

The simple fact is that failing to act because of political or other pressures will condemn past, present and future generations of Haitians to a world of injustice.