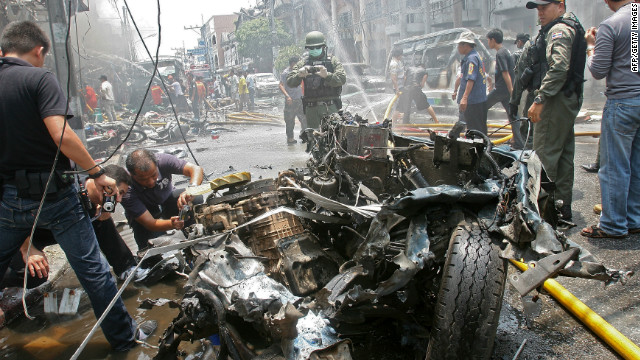 Is Asia's forgotten revolt about to explode?

By Jonah Blank, Special to CNN

Editor’s note: Jonah Blank is a senior political scientist at the nonprofit, nonpartisan RAND Corporation, and a former policy director for South and Southeast Asia on the staff of the U.S. Senate Foreign Relations Committee. The views expressed are his own.

It was the deadliest day in the rebellion’s deadliest decade: On February 12, dozens of gunmen armed with assault rifles and wearing ballistic vests attacked a Thai Marine post in the southern province of Narathiwat. At least 16 of the militants were killed.

The so-called Pattani Insurgency has taken more than 5,000 lives since its embers were rekindled in 2004, but this was reportedly the greatest death toll on a single day in several years. The assault, combined with a recent spate of attacks on school teachers, raises a troubling question throughout Southeast Asia and beyond: Is this long-ignored revolt poised to explode into something even more dangerous?

The battle in question took place in the district of Bacho – a place where, in late January, four assailants on motorcycles had shot a teacher dead while his students were at lunch. He was the 158th teacher killed in the past nine years. These twin assaults – one on hardened Marines, one on an unarmed instructor – are two sides of the same conflict.

Less than a half-day’s drive from tourist destinations like Phuket and Krabi, the southern provinces have seen carnage more commonly associated with war zones. Narathiwat, Pattani, Yala, and four districts of Songkhla have experienced high levels of violence over the past decade, and all too often the targets have been ordinary schoolteachers.

The causes of the conflict are similar to those underlying many rebellions: struggles to uphold ethnic and religious identity, political and economic disempowerment, government abuses of human rights and dignity. The population of these provinces (which became part of Thailand only in 1909) is mostly Malay rather than Thai, mostly Muslim rather than Buddhist, and feels little cultural kinship with the rest of the nation. Most residents of the region do not wish to unite with neighboring Malaysia, but they do strongly resent what they see as the Thai state’s efforts to make them second-class citizens in their own ancestral land.

This is why teachers are so often the targets of attack. In the rebels’ view, schools aren’t neutral places for children to receive an education. They are seen by the rebels as government-run indoctrination centers, propagating an exclusionary history (the glories of the Pattani Sultanate barely register in the standard curriculum) and an alien language (the local Malay dialect is completely different from Thai, and is written in a script called Yawi that is no longer used even on the Malaysian side of the border).

Thailand’s deep south has experienced periodic disturbances going back a century, but the past decade has been its bloodiest phase. There is no organizing command structure with the power to enforce discipline among loosely linked bands of young fighters (called juwae), and the line between political violence and mere criminality is often unclear. I have interviewed top-level officials from the Pattani United Liberation Organization and other rebel groups, but these aging, long-exiled figures admit they have little control over events on the ground. I have also interviewed commanders of the covert cells that carry out rebel attacks. They, too, acknowledge their inability to coordinate any sort of unified strategy, lacking rules of engagement or even a coherent set of demands.

In December 2012, five gunmen entered a school cafeteria in Ban Ba-Ngo, a town in Pattani province. They singled out two Buddhist teachers and shot them dead. Schools in the deep south were shut, but nearly all reopened within the week. The slaughters were horrific, but life went on. There was a difference in the most recent school killing, the one in Bacho so close to the attack on the military post: In this case, the dead teacher was Muslim, and the school was a Muslim academy.

Does this mark a new, more nihilistic era of the revolt? What message could the killers have been trying to send by executing a man attempting to teach the ethnic Malay children in the way the rebels say they desire? Could it have been a mistake? Could the juwae have thought they were attacking a Buddhist teacher at a state-run school? Or was there no real political angle whatsoever? After all, a great deal of the bloodshed in the Deep South, according to several self-identified rebel commanders, stems from private vendettas and mere thuggery dressed up in the bold language of revolution.

According to Thai authorities, the same rebel commander was behind both the school shooting and the attack on the Marine post. The Thai military says it was tipped off by locals, hence the lack of casualties among the defenders. If true, does this suggest that the rebels have overplayed their hand, and are alienating the ethnic-Malay population? Or does the audacity of their target selection indicate a dangerous new willingness to break through former limits?

The truth behind these attacks, as with so many of the deaths that have plagued the region in recent years, may never be known. The troops return to their barracks, students and teachers return to their schools, all wondering whether tomorrow will be even more perilous than today.