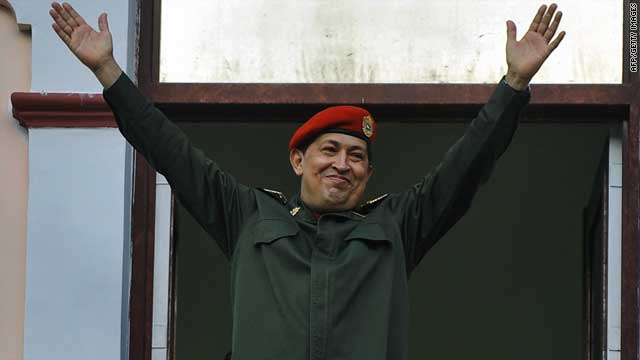 Chavez myth will outlive his achievements

By Christopher Sabatini, Special to CNN

Editor's note: Christopher Sabatini is editor-in-chief of the policy journal Americas Quarterly. The views expressed are his own.

It’s difficult to remember a time when Hugo Chávez didn’t dominate the headlines, just as it is difficult to believe that, with his death, there will come a time when he no longer does. Elected as Venezuelan president in 1998 and sworn in in 1999, Chávez became the voice of a new group of leaders across South America that came to power with the collapse of traditional, elite-dominated party systems. He was the bête noir of the United States, a hero to the anti-globalization left and to the poor in his own country, a savior to the Castro regime in Cuba, and the clown prince of the regional summit circuit. For all this, though, Chávez’s legacy in Venezuela and in the region will be one of institutional debasement and polarization.

The one-time lieutenant colonel rose to prominence in 1992, when he and a group of mid-level officers attempted a coup against the country’s then-President Carlos Andrés Pérez. In a brief statement to the media, Chávez promised that while he may have failed, that he would return to correct the social injustices that led to his putsch. After serving time in prison he did, winning the 1998 presidential elections, overturning a two-party system that had governed Venezuela since 1958 through an increasingly closed, corrupt system held together by the country’s oil riches and patronage.

But the revolutionary coup plotter proved a better destroyer of first the system that preceded him, and then the state that he created, than an institution builder. After convening a constituent assembly in 1999, Venezuela approved a new Bolivarian constitution – named after Chávez’s hero, South American independence hero Simón Bolívar. Even before new elections and appointments to fill state positions like the Supreme Court, Chávez and his supporters in the constituent assembly started to subvert their own constitution.  Over the course of the next 14 years, the Chávez government undermined judicial independence, used Central Bank reserves for patronage, created partisan militias, established parallel local government structures – including the police forces in Caracas – consolidated control over the media, politicized the electoral commission, and nationalized private companies by caprice.

More from CNN: After Chavez, a power vacuum

At the same time, President Chávez bullied political opponents and threatened opposition media. The result of the institutional vacuum, heated political rhetoric and arbitrary policies was the escalation of political polarization and a spike in corruption and criminality never seen before in Venezuela. Over the course of the last 14 years, the threat of political violence always hung in the background with competing street marches in the early years almost a daily occurrence and with a near majority of the population distrusting the state mediate social and political conflicts. At the same time, Caracas became one of the murder capitals of the world.

This ignominious distinction tracked (not coincidentally) with the growing evidence that sectors of the government, including the military, were involved in narcotics trafficking, leading the U.S. Treasury to blacklist seven Chavista government officials.

Through all of this, President Chávez cleverly avoided international criticism and oversight by angrily asserting national sovereignty, stoking anti-American suspicions and at times behaving like a buffoon. All three worked particularly well. Through the five referenda and presidential elections that were held after 1999, Chávez effectively beat back decades of advances in election observation and standards. While elections were never stolen in the traditional sense – though the opposition in 2004 clumsily attempted to claim so and then refused to participate in the 2005 elections – the disproportionate advantages that the government had in public spending and media also meant they were not free and fair.

More from GPS: Who comes after Chavez?

But the president’s railing against imperialist intervention and blustering claims of national sovereignty intimidated the international community. President Chávez promoted the retrograde idea that any form of criticism of human rights came from political opponents, coup plotters (like him?) or was an affront to the country’s dignity.  Sadly, despite an international community that had evolved to defend and protect these rights, Chavez’s bluster worked far better than many would have thought pre-1998.

Human rights concerns were all-too-often dismissed because the president was seen as a champion of the poor. And Chávez’s decision to pull Venezuela out of the Inter-American Human Rights Court and efforts later – in collaboration with his ally Ecuadoran President Rafael Correa – strip the Inter-American Commission of Human Rights of its independence did not provoke the sort of region-wide opposition that many would have expected. Such is the advantage of being an international bully.

In the end, the legacy of Chávez won’t be so much his leadership or Chavismo more generally.  There will be little institutional imprint left by Hugo Chávez. Quite the opposite. While the myth of Chávez and his considerable charisma will remain, little concrete will remain, except the age-old lure and echo of populism and its risk...not unlike that of his hero, Bolívar who wrote, shortly before his death “those who have served the revolution have plowed the sea.”