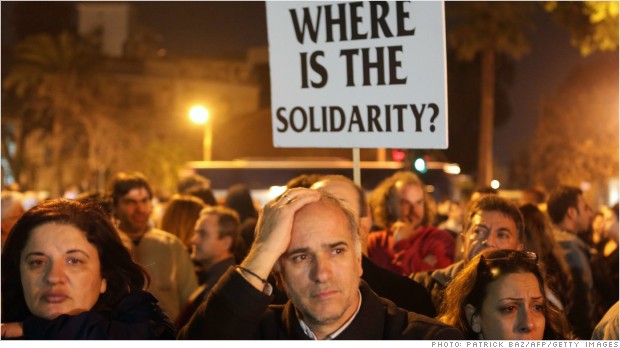 Cyprus: Caught between Russia and a hard place

By William Pomeranz, Special to CNN

Editor’s note: William Pomeranz is the acting director of the Kennan Institute at the Wilson Center in Washington D.C. The views expressed are his own.

The European financial crisis has reared its ugly head – this time in Cyprus. The tiny nation’s lawmakers have rejected a confiscatory tax on bank deposits that would have allowed the nation to receive a 10 billion euro bailout from the EU. Cypriot citizens angrily took to the streets to express their disapproval of the plan, but it turns out that they were not the only aggrieved party. The Russian government also joined in the chorus of protests, calling the Cypriot government’s actions “unjust, unprofessional, and dangerous.” Much of the money to be expropriated, it turns out, is held by Russian individuals and businesses (or, to put it in slightly less flattering terms, oligarchs and shell companies).  But Russia’s public outrage masked a more fundamental dispute with Cyprus concerning the island’s status as a major offshore financial center.

Cyprus has been the preferred destination for Russian money for years.  Close proximity to Russia – along with an assortment of tax privileges – made it a convenient location for Russian companies and oligarchs to park billions of dollars. Yet not all of this money stays in Cyprus; the country is one of the leading foreign investors in Russia, a statistical anomaly for the island, but nevertheless evidence that at least some Russian money returns to its country of origin in the form of foreign direct investment.

Cyprus retained its access to the Russian market even after it joined the EU in 2004. It further shrugged off repeated criticism from other EU member states that Cyprus served as a prime location for laundering Russian assets. But the 2008 financial crisis – and the collapse of Greece – delivered a crippling blow to the Cypriot banking industry, forcing the country to seek alternative sources of financial support. Russia has provided important assistance during this crisis, most notably, a 2.5 billion euro loan in 2011.

As the most recent discussions of proposed rescue plans heated up, the Russian media reported that the Russian Finance Ministry was preparing more onerous conditions for Cyprus in exchange for any additional Russian money.  Most notably, Russia was demanding that Cyprus hand over information about the Russian owners of bank accounts and corporations located on the island. Such a transfer of confidential data undoubtedly would destroy Cyprus’ ability to serve as an offshore financial center, a fact that would no doubt have been greeted with cheers in Kremlin, which has conducted a major public campaign against offshore operations for the past year.

The primary spokesman arguing against such structures has been Vladimir Putin, who introduced the word   “deoffshorization” into the Russian during vocabulary during his December 2012 state-of-the-nation message. He bemoaned the fact that businessmen managed to flee Russian jurisdiction for their investments and other business activity through various offshore structures.  Putin further mentioned the need to sign bilateral agreements with different offshore locations to promote offshore transparency. Putin’s ultimate objective appears to be that all major transactions (i.e. privatizations) take place in Russia and be governed by Russian law, thereby making it more difficult for Russian money to escape the country.

So Moscow’s demand that Cyprus provide detailed information of Russian depositors can be seen as part of a determined effort by the Kremlin to go after these offshore havens and somehow return money onshore.  This may be wishful thinking considering how fast money moves around the world and the existence of alternative offshore locations. But it has become a consistent refrain of the Russian government over the past months.

Not surprisingly, in light of Russia’s extreme demands, the Cyprus government opted for the EU alternative, namely to subject large accounts, over 100,000 euros, with a 9.9 percent tax. Such a levy had a certain logic; Russians were the greatest beneficiary of the Cypriot banking system, therefore, they should be the ones who pay for the bulk of the bailout through the new tax.

Luckily for the Russians, the Cypriot people were equally outraged by its government’s actions. This means that now Cyprus is looking for a new way out of its crisis. The situation is comparatively worse than it was just a few days ago; no depositor can rationally now believe that his or her accounts are safe in a Cypriot bank. It is also clear that the major EU countries have no intention to bailout Cyprus for the sake of Russian account holders.  Meanwhile, the Russians are furious because they were reportedly not consulted before the announcement of the draconian EU bailout conditions.

Initial attempts to engage Russia in resolving the Cypriot crisis appear to have reached a dead end.  Gazprom apparently expressed some interest in providing loans in exchange for the gas exploration rights off the Cyprus shelf.  Other potential scenarios included Russian control of the board of directors of several Cypriot banks.  Nevertheless, it appears that Cyprus is again pursuing a European solution without Russia (although Prime Minister Dmitry Medvedev did state that Russia hasn’t closed the door on its possible participation). Interestingly, Medvedev also stated that Russia should consider letting its Far East Islands turn into tax havens.  “Some of the money that’s in Cyprus …may as well move over there.”

Russia clearly wants to protect the money of its citizens, since some of the money is destined to return home. But at the same time, Russia also wants to strike a blow against the use of such offshore havens.   Cyprus is quickly running out of options, but it would appear that Russian help – no matter what guise it comes under – arrives with important strings attached, namely in order for Russia to save Cyprus, Cyprus must be willing to surrender its offshore status.