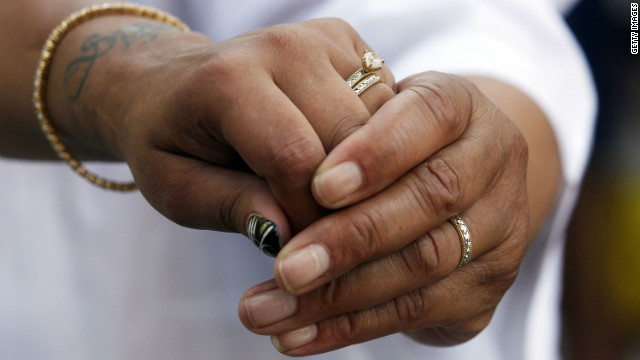 Same-sex marriage around the world

Editor’s note: This is an updated version of an article published in February 2013.

Last year, President Barack Obama announced that he now supports same-sex marriage, setting off a new round of debate in the U.S. over the issue. His support came on the heels of North Carolina voting to implement a state constitutional ban on same-sex marriage.

This week, the U.S. Supreme Court is hearing oral arguments in two cases that will have major implications for gay rights in America. One case looks at whether voters can block same sex marriage, as was the case with California's Proposition 8. The other looks at the constitutionality of the Defense of Marriage Act, passed in 1996, which defined marriage as between a man and a woman. That act was signed into law by former President Bill Clinton, who said recently that he regretted the decision. Former Secretary of State Hillary Clinton, meanwhile, has announced her support for gay marriage, saying "gay rights are human rights, and human rights are gay rights."

But where around the world is same-sex marriage legal, where is legislation likely to happen next – and where is it criminalized?

The first same-sex couples walked down the aisle in the Netherlands in 2001. Since then, almost a dozen countries have followed in passing laws allowing same-sex marriages and domestic partnerships, including Argentina, Brazil, Canada, South Africa, Belgium and Spain. Nearly 20 other countries offer some rights to same-sex couples but stop short of marriage – including France, Germany and the U.K.

After becoming the first country to legalize same-sex unions in 1989, Denmark last June backed a gender neutral bill allowing gay marriages through church weddings or civil registry. In February of this year, meanwhile, British members of parliament offered resounding support for same sex marriage, voting 400 to 175 in support of a bill on its second reading in the House of Commons.

More from CNN: 5 things to watch in Supreme Court case

Australia, though, is one of many countries around the world where same-sex couples are not permitted to legally marry. A bill that calls for the legalization of gay marriage was submitted to parliament but received little support, especially from the country's leader. Prime Minister Julia Gillard has long opposed gay marriage, and in September, lawmakers voted overwhelmingly to reject a bill that would have legalized same-sex marriage.

But opposition has also been seen in some parts of Europe, including in France where protesters have taken to the streets over a draft law that would allow same-sex marriage and adoption. This past weekend, hundreds of thousands turned out in Paris in demonstrations that eventually turned violent as riot police used teargas.

What's your take? Should the Supreme Court allow gay marriage? Should states be allowed to decide for themselves? Is your country likely to? Is the U.S. debate on the issue different or the same as other parts of the world? Submit an iReport or share your comments below.

Topics: Human Rights • United Kingdom
Next entry »Why have we forgotten about Libya?
« Previous entryOn GPS this Sunday: Money matters

Next entry »Why have we forgotten about Libya?
« Previous entryOn GPS this Sunday: Money matters