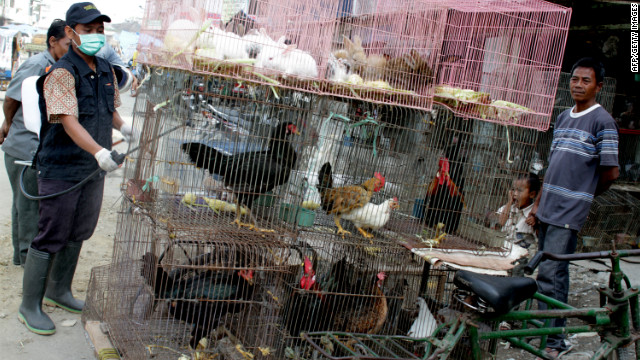 By Laurie Garrett, Special to CNN

Editor's note: Laurie Garrett is a Pulitzer prize-winning journalist and senior fellow for global health and the Council on Foreign Relations. The views expressed are her own.

This week, millions of Chinese visited family cemetery plots for the annual Tomb Sweeping Festival. They left or burned objects they thought their deceased ancestors could use in the afterlife, including chickens, pigeons and other food delicacies. Mao Zedong banned tomb sweeping because he thought it a decadent symbol of China’s Confucian past. But this year, China’s Communist Party had a different concern for tomb sweepers: Don’t handle live birds for your ancestors, or you just might be joining them in the afterlife.

The emergence of the H7N9 avian influenza, mutated into a humanly infectious form, would be cause for concern even if it were a one-off event in a remote Chinese farm village. After all, this class of flu virus has never before infected, sickened or killed human beings – it’s a bona fide bird flu. But the disease drama now is unfolding in five large eastern China cities with a combined population of 48 million. This is a decidedly urban flu, its human victims identified to date span from ages 4 years to 87, and for most of the cases there is no obvious explanation for how they contracted their infections, or why their loved ones, co-workers and neighbors apparently did not.

Information released to date by Chinese health and agricultural authorities boils down to:

– Four of the flu viruses found in deceased Shanghai, Anhui and Hangzhou patients have been fully genetically sequenced, and those details have been posted on a transparent website for all the world to scrutinize.

– Those flu virologists that have examined the sequences say H7N9 – which for millennia has only infected birds – has now mutated into a mammalian virus. There are stretches of RNA genetic material that are exclusively found in flu viruses that infect mammals.

– But the Chinese insist those thousands of bloated pig carcasses that were floating down Shanghai’s Huangpu River when this outbreak began were coincidental occurrences – the animals did not have H7N9 flu. No satisfactory explanation for the pigs’ deaths has been offered.

– Some pigeons, doves, ducks and chickens caged for sale in the Shanghai poultry markets tested positive for the virus, but showed no signs of illness. Yesterday in Shanghai some 20,000 of them were killed, in hopes of stopping putative spread from birds-to-people.

– There is no indication that H7N9 is spread from person-to-person, or that a lot of Chinese are carrying the virus without outward symptoms of flu.

None of this is making sense.

Looming over all other questions in this outbreak is the Denominator Problem. Typically, when a dangerous disease breaks out in people for the primary time it’s noticed first in hospital emergency admissions, as deathly ill individuals gasp for air. These acute cases are counted, and as their numbers climb it’s possible to get a dangerously distorted view of disease severity. As I write these words, Chinese authorities have reported 16 confirmed cases of H7N9 infection, all critical; six have proven fatal. And no infected-but-mild flu cases or asymptomatic individuals have been identified. So it seems this H7N9 produces life-threatening illness in 100 percent of infected humans, killing nearly half of them.

But those numbers must be wrong. When H1N1 swine flu broke out in Mexico authorities were terrified by a sudden wave of critically ill and dying pneumonia patients that swamped emergency rooms all over the country. It seemed that “the big one” was upon them – an influenza so lethal and contagious that it might sweep over humanity with devastating result. But I warned at that time about the Denominator Problem: How many Mexicans had mild or frankly unnoticed infections? As it turned out, the denominator was enormous, so that for every seriously ill swine flu case there were thousands of mild and asymptomatic infections. What had initially seemed a terrifying specter turned out to be a very contagious, but wimpy, flu.

So far, China has not provided any genuine denominator. This is most likely due to one of three things.

First, the actual blood test used to identify infections is overly specific, missing infections. So infected, but not ailing, people that are controlling the viruses in their bodies so well that very few microbes are present in each tested droplet, may be missed. And long-dead pigs may no longer harbor sufficient live virus in their rotting blood to be picked up in the tests. Details of the testing method(s) used by health and agricultural investigators have not been released, though scanty reports from Xinhua, the government news agency, indicate PCR nucleic acid amplification has been deployed. PCR assays are notoriously prone to contamination, and are only as reliable as the investigators’ choice of gene sequences to study. If the assay is designed to look only for rust colored bricks the investigator may not see the entire building.

The most recent announcements from WHO and Chinese authorities indicate most of the “testing” of close contacts of ailing or deceased H7N9 patients has featured interviews, not actual blood tests. Individuals are asked by health department investigators whether they have experienced the symptoms exhibited by the 16 known patients: difficulty breathing, high fever, extreme fatigue, dizziness, profound muscle aches…And unless the questioned individual is sick at the time of interview, the public health official must rely on self-reporting.

There are three reasons why many Chinese might choose to hide an illness if it weren’t obviously life-threatening. First, during the SARS epidemic the People’s Liberation Army took control of most patient care outside of the initial Guangzhou outbreak of December 2002, placing all fever patients in confinement. Those not held in military facilities were quarantined for weeks either inside key hospitals or their homes. For some the isolation and fear was so great that they leapt from high story windows to escape, or bribed their ways out of confinement if they were wealthy enough to do so.

Though the government has announced that patient care for H7N9 should be free, healthcare can be bankrupting in China. The reported $1,600/day cost of H7N9 care may seem small compared to an American hospital bill, but it’s a daunting sum for many Chinese. Even in wealthy Shanghai the GDP per capita in 2012 was $9,100 – a week’s hospitalization would wipe out a year’s income.

During the SARS epidemic I spoke with many patients’ families that had been assured the government would cover the costs for their loved ones’ care, but wept openly as they described doctors and nurses demanding huge payments, or else. Typically, the threat was without more money, your loved one will simply be left on his own in isolation, without medicine, without food. These stories circulated widely in 2003, and resonate today.

A final, perhaps more complicated reason family, co-workers and friends of the 16 H7N9 sufferers may not admit to experiencing flu-like symptoms is China’s air pollution. I was in Beijing in January when the particulate levels soared to levels 20 times above the U.S. EPA top allowable air pollution index. During that time my eyes watered, throat burned, head ached, I coughed and I felt tired and depressed. March of this year witnessed the worst March air pollution in Chinese history, according to government officials. It would be easy to miss a mild flu when feeling lousy, and flu-like, day after day, thanks to the pollution.

This Denominator Problem is the key to understanding what is going on. Essential to assessing the severity of the disease, valid determination of mild infections is the only way to figure out whether person-to-person transmission is taking place. For example, in March three members of the same family in Shanghai came down with critical cases of pneumonia, and all were hospitalized. Two of them died – an elderly father and his middle-aged son. The third survived his ordeal. Only the deceased father tested positive for H7N9, according to Shanghai health authorities. We are left to wonder at the profound coincidence that both of the deceased’s sons had pneumonia at the same time as he, but from some other, unknown cause. If Chinese test methods are correct, the coincidence is real. If the test approach is mistaken, this family more than likely experienced human-to-human transmission of the H7N9 virus.

My Council on Foreign Relations Colleague Yanzhong Huang argues that, “the post-Mao policy process has witnessed a shift from ‘bandwagon’ to ‘buck-passing,’ which encourages strategic disobedience and policy shirking. For this reason, China’s response to public health emergencies may continue to be bedeviled by lingering problems of under-reporting, misinformation, and inaction.”

On March 19 a Chinese government agency issued the following statement, which ended up on the social media site, Weibo: “The Shanghai Huangpu River dead pig incident is already being dealt with effectively. Related follow-up coverage should follow Xinhua wire copy and information issued by authoritative local departments. The media are not to send journalists to Jiaxing or similar locations to investigate, nor to sensationalize or comment on the issue.”

A few years ago I wandered through an old cemetery in Nova Scotia, and realized too many graves bore death dates for 1918. It was, of course, the Great Influenza that felled these souls. We can only hope that next year’s Tomb Sweeping Ceremony doesn’t find a disproportionate number of Chinese graves bearing year-of-death etchings for 2013.