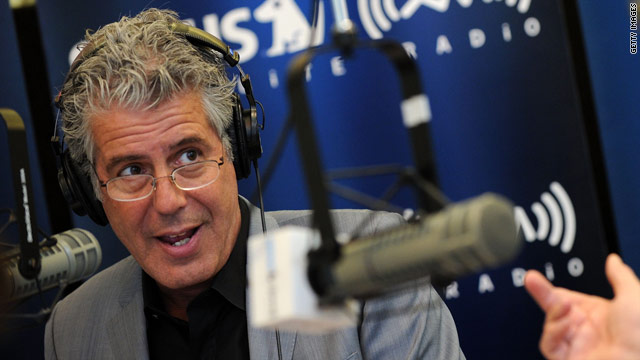 Renowned U.S. chef, food critic and Emmy-winning globe trotter Anthony Bourdain tells GPS digital producer Jason Miks his top food cities, and answers readers’ questions about where he’d like to visit, the country that most surprised him, and what he won’t eat. You can also watch Fareed's interview with Anthony on GPS this Sunday at 10 a.m. and 1 p.m. ET.

Locals appearing on your shows generally seem kind and hospitable, says ‘Sarah Harvard’ on Facebook. She asks whether there is anywhere that you have felt unwelcome, especially as an American?

Over the years, there have been times when the mood has been substantially paranoid – people shy away from the camera or are even hostile to anyone with a camera. There are times when people are not particularly welcoming to Americans or any foreigners. Romania, Russia, Uzbekistan – former Iron Curtain countries. The Soviets really put the screws to people in a lot of ways. And even all these years later, Romania was often uncomfortable.

Russia is seldom welcoming, so you have to put in extra work. If you’re going to make friends and make Russians open up – not to play to the stereotype, but it’s true there – you’ve pretty much got to knock back half a bottle of vodka with the subject before you get to the scene. When we first went into Iraq, the mood in England, France, Germany and Australia was dubious. If you were looking for an overtly pro-American greeting you would strangely have to go to China.

So yes, it’s happened – not every group is well-disposed to outsiders. A lot of places just don’t like strangers and it’s a bit of a struggle. Often, it requires extra alcohol.

Another reader asks if there is anywhere you’ve been that’s really surprised you?

Colombia is always a surprise. Medellin used to be the worst place on Earth – it used to be the murder capital of the world. If you watch the movies and much of what you see on the news, then Colombia looks like a bad place. In fact, me and my crew have never been so welcomed anywhere. It was a surprise how much a place can improve when they set their mind to it, and how many wonderful things there are about the country that we are often unaware of. It really is a special place.

How long does it take you to actually put together a show? How long do you usually spend in a country?

Between 7 and 10 days. There’s a few months of pre-production, 7 to 10 days actually shooting on location, and then anywhere from 5 to 12 weeks of post-production editing, writing – which is a major, major part of the process. We spend a lot of time crafting each episode, each one individually tailored for its own feel.

Have you ever inadvertently offended a host, asks ‘Amanda Vss Sgl’ on Facebook?

I often look ridiculous in Japan. There’s really no way to eat in Japan, particularly kaiseki in a traditional ryokan, without offending the Japanese horribly. Every gesture, every movement is just so atrociously wrong, and the more I try, the more hilarious it is. But you get cut a lot of slack if you are a foreigner. They put up with a lot of things that would be considered egregious among other Japanese but that are tolerated with humor and embarrassed giggles. I feel like a gorilla in an undersized tuxedo every time I’m in Japan. But it’s so wonderful and endlessly fascinating, and I don’t care if I look ridiculous because I really enjoy the place.

Have I ever really offended anyone? I’ve eaten rotten, filthy food that I knew would make me sick on many occasions rather than offend someone. I really go out of my way to eat anything to be a good guest.

Is there anything you wouldn’t eat?

I try to very hard to avoid a situation where I would be eating cat or dog; I’ve managed to gracefully avoid that. It’s hypocritical of me and an arbitrary line, but one that I have managed to avoid crossing. I would prefer if I can in any way avoid it being confronted with shark fin. I would rather not be part of that. But basically, if the choice is between me violating my deeply held principles of what is food and what is a pet and offending you, then I would rather violate my principles.

Is there anywhere you haven’t been yet that you’d really like to go, asks ‘Sam Pham’?

I’d really like to go to Iran. But I’d like to see things change to the point that I would feel physically and morally comfortable going. I’ve put off going not out of any specific security concerns, but out of a general sense of discomfort to whatever degree they are complicit in assisting in the blowing up of American soldiers. I’m queasy about doing a show, but I’ve heard wonderful things about the people, about the food. But honestly, I have some serious reservations about the government.

You visited Myanmar, though, for the opening show in your new series. Do you feel enough has changed there – did you see much change?

Freedom of speech is a big change. There’s a lot of unpleasantness going on, there’s no doubt about it. This is not a cuddly government – there isn’t much that can be admired about it, to say the least. But the fact that the door has opened this much, in my view, it has opened enough to the extent that outsiders can see Myanmar and those in Myanmar can interact. I think that is a positive thing. I feel the same about Cuba. I think when we are able to see how Cubans live, and the extent to which they can see how we live and become part of the conversation, I think it’s a positive thing.

If you were picking any two cities – one in the U.S. and one overseas – that you would tell someone they absolutely had to eat, what would they be?

Tokyo would probably be the foreign city if I had to eat one city’s food for the rest of my life, every day. It would have to be Tokyo, and I think the majority of chefs you ask that question would answer the same way.