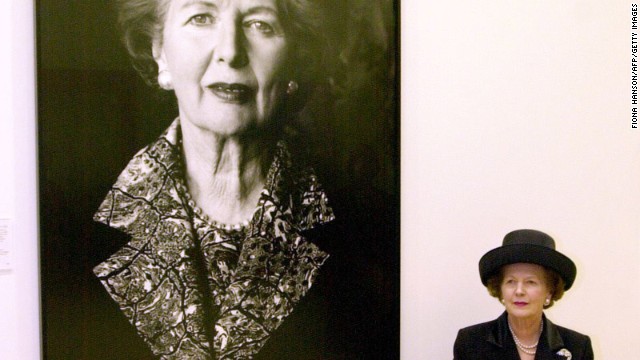 By Nicholas Walton, Special to CNN

Editor's note: Nicholas Walton is the communications director of the European Council on Foreign Relations. The views expressed are his own.

Even former British Prime Minister Margaret Thatcher’s sternest critics (and the days after her death have shown just how many there are) should be able to concede one point about her legacy: she gave us plenty to argue about. Did she save an ungovernable Britain from the grip of the unions, or unleash an unparalleled wave of self-absorbed consumerism that reached its crescendo in the financial meltdown of 2008? Was she a good European who fought for an EU that concentrated on the areas where it mattered, or an exemplar of the pesky British habit of sticking a spoke through the wheels of European progress?

For those Brits still thrashing out these arguments as her funeral took place today, the debate is more or less inexhaustible. But whatever side people find themselves on, the arguments all stem from Thatcher’s recognition that times had changed and her resolve to do something about it, and that is something that Europe’s leaders could learn from today.

Thatcher’s hairstyles alone reflected how in 1979, when she won her first general election, the country felt closer to the immediate post-World War II period than our modern age. But this was also an age when British car makers competed to sell the most spectacularly ugly cars (badly built to boot), British food was largely inedible and potatoes usually came in powdered form. This was a Britain that did not need Instagram to look old fashioned.

By the time she was defenestrated by her own ministers in 1990, Thatcher had pulled and cajoled Britain into a recognizably modern age, for better or worse. Finance and the City of London had been given its wings, and women started appearing in offices (and ashtrays began to disappear). Whisper it quietly to the rest of Europe, but the Brits even started to learn to cook: olive oil migrated from the pharmacy to the kitchen.

The rest of Europe, of course, had also been forced to take notice of this remarkable woman. Back in 1975, Thatcher had campaigned to keep British membership in the European Economic Community. In office, she maintained the connection between Britain and the European “family of nations,” while wielding her handbag in favor of the Europe she wanted, based around the single market but shy of political integration. She saw the euro as paving the way to German domination, and was scornful of the French affection for European bureaucracy and agricultural protection. She also championed enlargement to take in the states of the former Soviet empire. Through it all, Thatcher remained clear that her priority was Britain, with its interests and democratic institutions always outweighing those of Europe – hence the resistance to the Maastricht Treaty and her warnings about a European super state (“No, no, no,” she famously told parliament).

Some of this sounds fairly convincing, given the crisis that the continent has been trying to deal with since 2008. But the obituaries also make clear that they see Thatcher at the root of some of the continent’s current problems, from an over-reliance on a “speculative” financial sector to the inability to forge a united Europe that could deal with the challenges thrown up by incomplete integration.

But another reading of her time in office might prove instructive and useful to many Europeans. The Britain that she became leader of in 1979 was built upon an earlier time, and, having recognized this, she changed it. Not everybody would agree that the changes were for the better, but most now recognize that some form of radical change was overdue. There are obvious parallels with Europe.

The Nobel Peace Prize awarded to the EU is a clear nod towards its genesis as a union built to bring nations together in the wake of a horrifying conflict. The backdrop was Franco-German enmity, the rebuilding of a devastated continent, an Iron Curtain that ran from Stettin to Trieste, and nuclear oblivion. It is as relevant to the multipolar world of 2013 as Victory in Europe and the end of empire were to Thatcher in 1979. Certainly, if you wanted to design a multinational organization that brought the Europe of today together to face the challenges of competition with Asia and developing a low carbon high tech economy, you might not start from here.

Beyond the pub arguments, this is what the death of an 87-year-old woman can mean to Europe now. Margaret Thatcher was a politician who inhabited history and tried to change it, rather than bounce along on its waves. She recognized that Britain was still stumbling about in a post-war, post-imperial malaise. She also recognized that Europe was moving towards bigger questions that would outstrip the political and ideological ambitions that were the main drivers behind integration.

The EU is now struggling to deal with those questions while also confronting the challenges of a much more competitive world than before. If it is to find a compelling vision that allows it to answer those questions and confront those challenges, it could do worse than look at the controversial example of Britain’s Iron Lady.