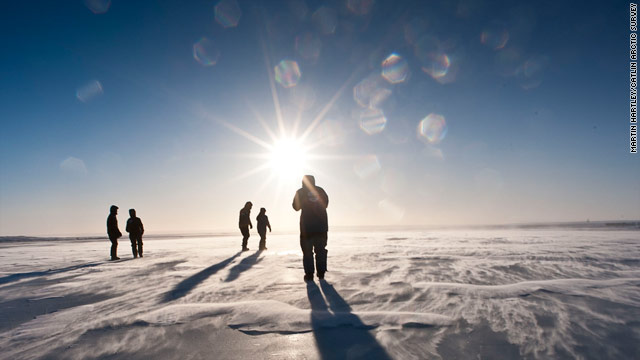 How America can ‘win’ the Arctic

By Heather A. Conley, Special to CNN

Editor’s note: Heather Conley is senior fellow and director of the Europe Program at the Center for Strategic and International Studies in Washington and author of a new CSIS report, ‘A New Foreign Policy Frontier:  U.S. Interests and Actors in the Arctic.’ The views expressed are the writer's own.

Last August, then U.S. Deputy Secretary of State Tom Nides declared that, for the United States, the Arctic is “one of the last true frontiers in the United States. It is becoming a new frontier in our foreign policy.”

He was right. The Arctic is a new frontier in the sense that the polar ice cap is melting so rapidly – confounding and deeply disturbing most climatologists and earth scientists – that once-frozen and nearly impenetrable borders in the region are now being traversed with increased frequency. The Arctic also presents a new opportunity for U.S. policymakers to address the emerging political, diplomatic, economic, and security dynamics caused by unprecedented climate change.

But what is America’s vision for its piece of the Arctic – the state of Alaska? Will the United States view the Arctic like a new frontier that must be explored, claimed, and developed along the lines of Teddy Roosevelt’s vision of Winning of the West, embodying America’s pioneering spirit? Or will Washington seek to protect and preserve the Arctic? What are U.S. policy objectives and priorities? What financial resources will be needed to implement these priorities? What are the right organizational and coordination structures to ensure that an American Arctic strategy is implemented and federal agencies are held accountable?

U.S. policy towards the Arctic has traditionally focused on three areas:  national security, development, and science. These priorities have been reflected in successive budgets of the Defense Department and the National Science Foundation for decades. But today, U.S. Arctic policy is increasingly shaped by economic factors, primarily concerning oil, gas, and mineral resource development as well as shipping.  It isn’t surprising that today the most senior level U.S. interagency policy group involved with Arctic policy is the Interagency Working Group on Coordination of Domestic Energy Development and Permitting in Alaska.

More from CNN: Why we should look to the Arctic

The reality is that there has been no updated Arctic policy statement since George W. Bush signed National Security Presidential Directive 66/Homeland Security Presidential Directive 25 before leaving office in January 2009. Prior to this, the last U.S. Arctic strategy was produced in 1994. Policymakers tend to give the Arctic a strategic look every decade or so.  But given the dramatic changes the Arctic region has experienced in the past four years alone, combined with the increasing geopolitical interest from such countries as China, Korea and India, it is critical that Arctic policy be sharpened and focused to reflect the shifting Arctic climatic and policy landscape.  In short, it’s time for the United States to think more broadly about “winning” the Arctic.

This will not be easy.  The Arctic is perceived as a far-off issue as policymakers convince themselves that they will have plenty of time to act until they must face ice-free conditions, say in 20 to 30 years.  But to ensure that the U.S. is prepared to address the increase in human and commercial activity that is already evident today, we must act now.  And to act, we must dedicate scare financial resources to the task. However, with only one medium-strengthened icebreaker and very minimal port and aviation infrastructure in Alaska, America is already behind.

Even if the Arctic was declared an urgent issue and resources could be made available today, Washington would still struggle with the task of coordinating U.S. Arctic policy.  How many federal agencies does it take to make U.S. policy in the Arctic (excluding state and local levels)? Answer:   23. This isn’t a joke; you read that right. How many White House coordinating groups are dedicated to, wholly or in part, to coordinate this policy today?  Answer:  Six.  A coordination nightmare of our own making.

So, what can the Obama Administration do to “win” the Arctic? Here is a five-step plan:

First, develop a prioritized national economic strategy for the American Arctic with a consolidated, multi-year budget.  It is not enough to create a wish list of all the things the U.S. would like to do in the Arctic.   We must prioritize them and make tough choices.  Begin by deciding how much or how little the U.S. will develop its Arctic. Between the global implications of U.S. unconventional oil and gas and the extraordinary costs of working in both a hostile and fragile environment, the U.S. has already decided (without formally acknowledging the decision) that it will take a more conservative approach to the Arctic rather than full economic development, although many in the state of Alaska strongly disagree.   There are suggestions that the White House is currently working on a plan that will prioritize U.S. objectives in the Arctic, but it is unclear how this plan will impact our overall policy.

Once a prioritized economic strategy for the Arctic is in place, there must be a new organizational approach in the White House and in the State Department to support this new policy. For the past 40 years, our approach to Arctic policy coordination is to add yet another working group to sort out the coordination complexity.  It’s time to create a single coordinating entity or federal department in charge of the twenty plus federal agencies which have a hand in developing U.S. Arctic policy.

An important third step would be to reinvigorate State Department leadership and appoint an Arctic envoy.  The Arctic issue should be a natural fit for a secretary of state committed to the law of the sea and slowing down the effects of climate change.  While it is contradictory to demand in one breath to streamline bureaucracy and in the next suggest adding yet another bureaucrat to the mix, for the moment the U.S. urgently needs a senior official to force the internal bureaucracy to function more efficiently while also providing a more visible and active diplomatic and international engagement strategy on the Arctic.

Why is this critical? The United States must prepare for its upcoming chairmanship of the Arctic Council, the premier inter-governmental organization to discuss Arctic issues, in 2015. This is only the second time the U.S. has held the chairmanship since the Arctic Council’s formation in 1996. Historically, the U.S. position toward the Arctic Council has been to keep its work solely focused on Arctic sustainable development and environmental issues and to suppress any larger ambitions. But, over the past four years, that policy has quietly (and correctly) changed and the U.S., along with the other Arctic Council member states, have worked collaboratively to strengthen the work of the Council.

Finally, we need to rediscover our great American pioneering spirit and apply it to our newest and perhaps most exciting frontier.  The United States is surrounded not by two oceans, but three:  We are an Atlantic, Pacific and Arctic power.  In the spirit of Teddy Roosevelt, let’s win the Arctic.

Topics: Arctic • Climate • United States
Next entry »Obama must stand up for women in Mexico
« Previous entryGovernors missing the point on Medicaid