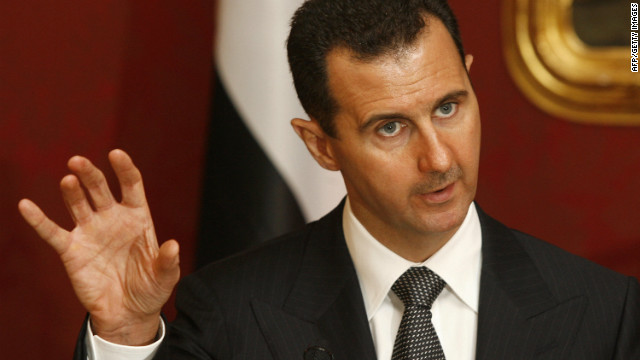 What if al-Assad prevails?

By Charles Dunne, Special to CNN

Editor’s note: Charles Dunne is the director Middle East and North Africa programs at Freedom House. The views expressed are his own.

Let’s imagine a world in which Bashar al-Assad wins a military victory, remains in power, and defies the world to deal with him. Because, unfortunately, it appears to be an all too plausible scenario.

An influx of Hezbollah fighters from Lebanon, and support from Iran’s Revolutionary Guards, has intensified fighting along the strategic corridor from Qusayr to Damascus. Reported use of chemical weapons, most probably by the Syrian government, has crossed a red line that the U.S. government has ignored, and thus sent a clear and discouraging message to the opposition. Hezbollah commander Hassan Nasrallah, for his part, said in a May 26 television address that Hezbollah would beat down al-Assad's opponents and stay in Syria as long as it needed to do it. “We will continue this road until the end, we will take the responsibility and we will make all the sacrifices,” Nasrallah said. “We will be victorious.”

Indeed, the head of German intelligence now estimates al-Assad’s rule is more stable than any time in the last two years, and he is likely to retake the southern half of the country by the end of this year.

Gerhard Schindler used graphics and maps in a meeting with select politicians “to demonstrate that Assad’s troops once again possess effective supply lines to ensure sufficient quantities of weapons and other materiel,” Der Spiegel reported. “Fuel supplies for tanks and military aircraft, which had proved troublesome, are once again available, Schindler reported. The new situation allows Assad’s troops to combat spontaneous rebel attacks and even retake positions that were previously lost.”

Meanwhile, U.S. Secretary of State John Kerry, pushing a peace conference at some point in the future, said in Amman on May 22 that “We don’t need more proof that now is the time to act…What we need to do is act.”

The fact is that the lack of U.S. action, especially compared with the energetic involvement of Iran and Hezbollah, amounts to an abdication of responsibility.

An al-Assad victory will lead to a more militant Syria, critically dependent upon Iran and Hezbollah. The Syrian state, if it can remain unified (a big if) will be gripped by sectarian tensions and vengeance killings, not unlike Iraq in 2006-07. The country is likely to remain a playground for terrorists, many of whom were, ironically, permitted free access by the al-Assad regime to fight Americans in Iraq. Now they’re coming back to fight against al-Assad’s regime.

And don’t forget the impact on the Middle East “peace process”: a wounded Syria, on which so much depends, will be unable to negotiate a peace with Israel, and indeed may be tempted to intensify hostilities to gather credibility at home.

Finally, Iran will gain the upper hand in a shadow war with the Persian Gulf States and their ally, the United States.  This is no small victory in a struggle for power in the region that has been going on since the U.S. invasion of Iraq in 2003.

America has so far provided $510 million in humanitarian assistance to Syria and $250 million in support to the Syrian Opposition and Supreme Military Council. This intervention is useful, but will have a limited impact on the ground. The United States must take a harder line on this conflict: arming vetted elements of the opposition, creating militarily-enforced humanitarian corridors, and above all a no-fly zone, will make a real difference. Calling out the Russians in their cynical support for al-Assad, to whom they’re sending advanced S-300 anti-aircraft missiles while calling for an international peace conference and decrying the lapse of the EU’s arms embargo to Syrian rebels, would be a good step too.

Doing little or nothing, as the United States is now, is no longer an option – at least, it’s not one that will in any way save Syrian lives or help protect U.S. interests.