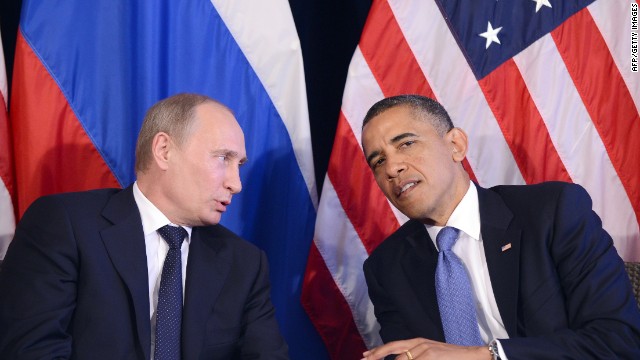 U.S.-Russia ties: Better than you think

By Jeffrey Mankoff, Special to CNN

Editor’s note: Jeffrey Mankoff is deputy director and fellow with the Center for Strategic and International Studies’ Russia and Eurasia Program. The views expressed are his own.

Faced with an increasingly complex international environment, President Barack Obama is quietly re-emphasizing one of the main priorities of his first term: trying to build a cooperative relationship with Russia. This may come as a surprise – after all, the atmosphere between the two countries has been decidedly frosty the past year. But although the high-profile outreach of the first-term “reset” may have been set aside, the Obama administration has been pursuing low key, concrete cooperation on issues ranging from Syria to Afghanistan to counter-terrorism. And, freed from the political baggage surrounding the reset, such cooperation is likely to prove more sustainable – and more effective at advancing U.S. interests.

Obama’s first term got off to a good start. Washington and Moscow agreed to cut their nuclear forces under the New START agreement, and Russia also provided logistical support for U.S. efforts in Afghanistan. Meanwhile, at the United Nations, Russia supported Iran sanctions and ultimately acquiesced to U.S. requests for intervention in Libya. This cooperation was symbolized by the bright red (but mistranslated) reset button that Secretary of State Hillary Clinton presented to her Russian counterpart in Geneva in 2009. As several of Obama’s other first term international initiatives fell by the wayside, the U.S.-Russia reset became one of his highest profile foreign policy achievements.

But this made the reset vulnerable when the political winds in Moscow and Washington shifted. Disputed Russian parliamentary elections in December 2011 brought massive protests into the streets of Moscow. Russia’s presidential transition six months later saw Vladimir Putin replace Dmitry Medvedev, with whom Obama had developed a close working relationship.

Not only did Putin’s previous tenure in the Kremlin coincide with a worsening of U.S.-Russian relations (culminating with the August 2008 war in Georgia), but the returning president now turned to anti-American populism to shore up his tenuous legitimacy. This included unprecedented harassment of new U.S. Ambassador Michael McFaul, previously the architect of the reset at the White House. Putin’s new government also cracked down on civil society groups, especially those with ties to the West. USAID was expelled, and NGOs receiving funds from abroad were required under a new law to register as foreign agents.

The U.S. Congress, meanwhile, was working to pass a bill imposing visa and financial sanctions on Russian officials implicated in the death of Sergei Magnitsky, a lawyer investigating a tax fraud scheme implicating several high-ranking figures when he was arrested and subsequently died in prison. Though the Obama administration believed that the so-called Magnitsky Act was unwise (and duplicated steps it was already taking), its options were constrained by the bill’s bipartisan support on Capitol Hill and election year politics, including Republican Party nominee Mitt Romney’s invocation of Russia as Washington’s “number one geopolitical foe.”

Making matters worse was the escalating crisis in Syria, where U.S. demands for the departure of President Bashar al-Assad ran headlong into Russian support for a strategic ally and opposition to foreign intervention, despite a mounting humanitarian disaster. In the last few weeks, Russia’s very public expulsion of an American diplomat accused of espionage has contributed further to the perception of crisis in U.S.-Russian relations.

Behind the scenes though, Obama has sought to boost cooperation, and early indications are that these efforts are succeeding. He announced the cancellation of phase 4 of the planned U.S. missile defense system in Europe, and limited the application of the Magnitsky law to a small number of fairly minor officials.

U.S. National Security Advisor Tom Donilon then traveled to Moscow carrying a letter from Obama to Putin laying out new initiatives for cooperation, including heightened transparency on U.S. missile defense plans, further nuclear reductions, a new communication channel between the U.S. vice president and the Russian prime minister, and the creation of a secure video link for communications between the White House and Kremlin. Putin and Secretary of State John Kerry then agreed to co-sponsor a conference seeking a negotiated end to the bloodshed in Syria. Donilon’s counterpart Nikolay Patrushev was just in Washington, with a letter from Putin emphasizing the need to find an agreement on missile defense.

This diplomatic activity underscores Obama’s recognition that Russian cooperation is necessary on several issues that will shape his legacy. The Boston Marathon bombing brought a renewed focus on the need for cooperation between intelligence services to counter terrorism. Russian intelligence and logistical cooperation will be especially critical during and after the withdrawal of U.S. forces from Afghanistan. While prospects for Syria’s future remain very uncertain, U.S.-Russian cooperation represents the only plausible path to a negotiated end to the conflict (despite al-Assad’s statement implying that he had received advanced S-300 air defense units from Moscow, Putin told European Union leaders this week that Russia had in fact suspended their delivery).

Unlike the reset, Obama is wisely keeping his outreach to Moscow low profile this time. Yet if a more cooperative relationship with Moscow leads to stronger intelligence cooperation, a deal on missile defense, and a viable Syrian peace process, it may come to stand as a key foreign policy achievement of Obama’s second term too.