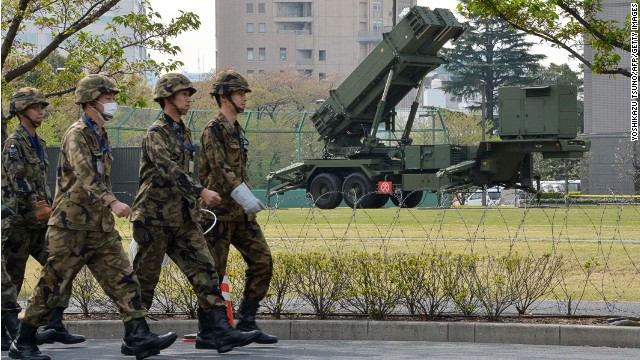 Editor’s note: James Holmes is professor of strategy at the U.S. Naval War College, coauthor of Red Star over the Pacific, and writes at The Diplomat. The views expressed here are his alone.

From the mouths of students comes wisdom. Of Imperial Japan and its depredations, a former student wisecracks: before there was Pokémon, there was Hegemon. This jest should be the watchword for Japanese diplomacy as Tokyo explains its move to a more offensive-seeming military strategy, and its acquisition of more offensive-looking weaponry, to Asian peoples mindful of its imperial forerunner's transgressions. What Japan appears to be doing – amassing the wherewithal to strike back at missile launchers and other enemy sites after riding out an initial assault – makes eminent operational and tactical sense. Convincing foreign audiences of that will be the hard part.

The image republican Japan projects of itself – one of a strictly defensive great power, intent only on keeping what now belongs to it – is something that demands constant upkeep. This is the bequest, and the burden, of the past for contemporary Japan. It will take a convincing, long-term, oft-repeated message to banish lingering memories of Hegemon from discussion of Japanese foreign policy and strategy.

The problem before Prime Minister Shinzo Abe and his lieutenants is that debates over the offensive or defensive character of a nation's strategy take place on multiple levels.  What seems commonsensical on one level may prove controversial or even self-defeating on another.

Meanwhile, the ruling Liberal Democratic Party (LDP) is looking to revise the National Defense Program Guidelines, the government's most authoritative statement of how it sees the strategic surroundings and intends to manage them. Since returning to power late last year, LDP officials have made noises about interpreting the no-war provisions of the postwar constitution – in particular Article 9, which means Japan is forsakes not just offensive military operations but the maintenance of warmaking potential – more loosely than past governments have. This has set commentators abuzz not just in Japan, but among its Asian neighbors and in the United States, its closest ally.

In one sense this is much ado about very little. It's doubtful in the extreme that Hegemon is making a comeback after almost seven decades of postwar pacifism and close ties with erstwhile foe America. In strategist B. H. Liddell Hart's terms, Japan is the quintessential "conservative" power. It wants to conserve what is in the face of "acquisitive" powers' (read China's) attempts to replace the convivial U.S.-led status quo with something different, and worse from Tokyo's standpoint. Why would Tokyo upset an Asian order that benefits Japanese prosperity and security so handsomely?

Conservative aims beget a strategically defensive posture designed solely to preserve the archipelago against armed attack. Parsing official statements such as Defense of Japan 2012, the defense white paper published late last year by the outgoing Democratic Party of Japan (DPJ) government, makes the defensive character of Japanese policy and high-level strategy plain. Like all governments, the LDP government wants to differentiate itself from its predecessor. Nevertheless, part of its message vis-à-vis fellow Asians must be that Japan's outlook and grand strategy will remain the same as before. Only its methods of executing that strategy will change. This is not some radical break with the past.

Indeed, Narushige Michishita of the Tokyo-based National Graduate Institute for Policy Studies sums up LDP thinking thus: "What they are basically saying is, 'When a potential enemy has started attacking us, then we would start offensive operations to take out their missiles, as well as their missile bases.'" An enemy mounts a challenge, and only then will Japan reply by force.

Still, this is where diplomatic dexterity is at a premium. Naval theorist Sir Julian Corbett helps explain why. Despite the lofty sentiments expressed in Article 9, a purely passive defense verges on impossible. Corbett notes that even a highly offensive war effort retains considerable defensive character. After all, a military takes the offensive in one, or a very few, places on the map. It remains on the defensive everywhere else. Forces and manpower are finite, and no force boasts overwhelming strength at all places. Similarly, even a defensive strategy like Japan's must have an offensive component. Otherwise the Self-Defense Forces will find themselves trying to ward off repeated blows while doing nothing to stop the assault.

No defense is perfect. The law of averages being what it is, some attacks will get through in a major missile or air barrage. Passive defense, then, represents a tough sell domestically for any government. After all, a government's foremost responsibility is to shield the populace and the homeland from aggression. The government could face a popular backlash if it were seen as doing too little in the national defense. It might even fall amid public wrath. For Abe & co., it may appear better to pay the diplomatic costs of shifting Japan's operational stance to a more active defense up front, rather than await the perhaps politically fatal costs of inaction after an enemy blow strikes home. Putting it to the electorate in these blunt terms may ease the government's job of salesmanship.

Hardware also complicates efforts to weave a convincing narrative about Japanese power and purposes. If few military strategies are purely defensive in nature, the same goes for weapons. Think about the F-35 Joint Strike Fighter (JSF), the stealth warplane of which Tokyo plans to procure forty-two. The JSF can be used as an interceptor, cleansing the skies of enemy warplanes. That's a defensive function ... except that by protecting Japan, it also protects U.S. forces based in Japan. And those forces represent the alliance's offensive striking arm. The JSF is also designed to penetrate enemy air defenses as a precursor to bombarding bases, missile emplacements, or troop formations. So is it offensive or defensive? The intent of the commander and his political masters – not the plane's technical specifications or the weapons it's capable of carrying – is what chiefly determines the answer to that question. The ambiguous nature of weaponry compounds the challenge of casting Japan as an intrinsically benign Asian state.

And lastly, let's scope back out to the level of high politics. How will Tokyo's shift of stance influence, and be influenced by, the U.S.-Japan alliance? This is a tough one. Both the LDP government and its DPJ predecessor have intimated that they view Japan, not America, as the primary steward of Japan's defense. Defense of Japan 2012 conforms closely to Article 51 of the U.N. Charter, which affirms that nation-states may exercise an “inherent right” of self-defense ‘if an armed attack occurs.” Japan has to absorb the first punch, then it can counterpunch unless and until the Security Council marshals a response. This could inject ambiguities into alliance deliberations, however. Might Washington hesitate before riding to the rescue in times of trouble? If so, with what repercussions for Japan’s defense?

Such matters are worth pondering as Prime Minister Abe and his advisers amend the National Defense Program Guidelines, draw up operational plans and doctrine, and mull future weapons procurements. In light of the gray areas illuminated here, some talking points about Japan's past and future might include: Japan has now been a liberal, democratic, pacifist state longer than it was an empire on the march. It has a long track record of abiding strictly by the language of the U.N. Charter, to the extent of foreswearing its prerogative to preempt imminent dangers. It doesn't just espouse pacifism, it lives it as much as can any sovereign state that inhabits a tough neighborhood.

Abe can advance the cause by the simple expedient of keeping his views about Japanese history private. Publicly musing about whether Japan's invasion of continental Asia constituted an invasion makes Abe look obtuse at best, bellicose at worst. Stop with the self-inflicted wounds already. It will take time to develop the offensive-defensive options Tokyo is contemplating. That should give the LDP time to put its diplomatic house in order.

Above all, thinking broadly about how hardware and operations are interlaced with Japanese domestic politics, foreign policy, and grand strategy should stand the Abe government in good stead.

Topics: Asia • Japan • Military
Next entry »Weekly quiz: Test your knowledge
« Previous entryAustralians happy – but not with their government

Next entry »Weekly quiz: Test your knowledge
« Previous entryAustralians happy – but not with their government