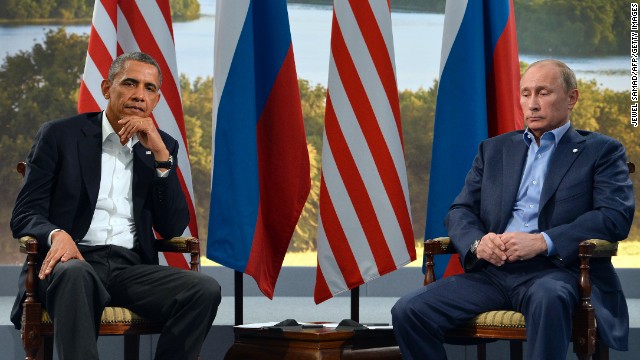 Former National Security Agency contractor Edward Snowden is a "free man" biding his time in a Moscow airport, Russian President Vladimir Putin said Tuesday. But should Barack Obama have taken the opportunity during a key speech the same day to ask Russia to send Snowden back to the United States? Fareed offers his take on the Situation Room.

If the president would have, for example, opened up his speech over at Georgetown University and said, I'm going to talk about climate change in a moment, but first, I just want to [offer] a direct appeal to Russia to send Snowden back to the United States, it obviously would escalate this situation, because the president has a lot more at stake then.

I think the danger is that if the president makes a public appeal like that and it doesn't work, you really do look bad. You lose credibility.

So I think the White House is probably calculating exactly how much pressure they can put. They started out very tough with the Russians, thinking that they might even kind of push them into doing something. And it became very clear the Russians weren't willing to do that. So they're now playing nicer. They're saying, look, can't you help us?

The U.S. has extradited a number of people. But this is a unique situation. This is a situation in which the person that we're talking about has revealed that the United States is engaging in massive surveillance programs of many, many foreign countries and governments. So from the point of view of those foreign countries and governments, it is, of course, a very complicated issue. I bet you that if you were to poll public opinion in Russia or China, they would support what their governments are doing right now.

Can the president sweeten the pot, if you will – give the Russians something that they've wanted from the United States for a long time and try to make a deal along those lines?

You know, part of what's happened here is that the asymmetry of power has become so great. During the Cold War, we spied a lot on them, they spied a lot on us. They would catch one of ours, we'd exchange them.

We have developed, ever since the end of the Cold War and after 9/11, this massive surveillance capacity that dwarfs anything any of these guys have. And so it's not clear what they have that, you know, what could we give them? We tower over them and they resent it. The Chinese resent it. The Russians resent it. So they look upon this as such wonderful P.R. that I don't know what we could give them in return.

I think there are things in a more general sense. The Russians want the relaxation of Jackson-Vanik, which is about grain exports from Russia, which a Cold War relic. There are probably other trade-related issues. But that would be a kind of an unusual tie. Typically in espionage, you've done a like for like, an apples for apples swap, except that we now do stuff that nobody else does, so I don't quite know what we could offer them.

Leave a Reply to Hank