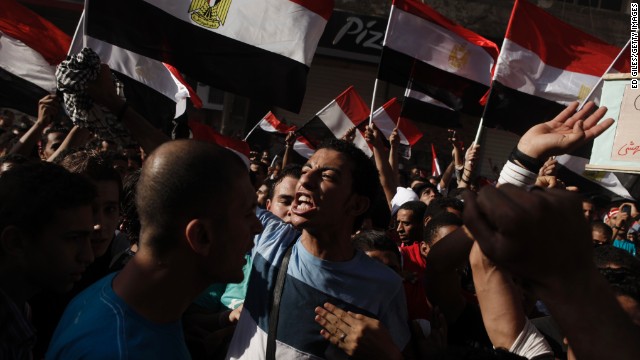 By Sahar Aziz, Special to CNN

Editor’s note: Sahar Aziz is associate professor at Texas Wesleyan School of Law and a member of the Egyptian American Rule of Law Association (www.earla.org). She can be followed on twitter @saharazizlaw. The views expressed are her own.

Egyptians have made more history in the last two years than in many decades past. They welcomed military rule only to waste 15 months pushing them back to their barracks. They turned out in record numbers to vote for a new parliament that was later dissolved by the Supreme Constitutional Court.  The first democratically elected president took office on June 30, 2012 only to be deposed by the military after barely completing his first year in office. Dozens of new political parties have been formed, most of which are inept at campaigning for popular support outside of Cairo and Alexandria.  And a new constitution was passed through procedurally questionable means that ultimately led to its current suspension.

All the while, the sacrifices of young people and women were rewarded by excluding them from official political processes, party leadership, and government institutions by the military, the political opposition, and Morsy’s regime.

With every step toward democracy, mistakes were made that provide important lessons as Egyptians develop the political maturity and experience needed to effectively self-govern, and the current political crisis highlights six particularly important lessons at this critical juncture in Egypt’s history.

Military rule is anathema to democracy. Military governance is the death knell of democracy irrespective of the military’s purportedly good intentions. Not only are initial promises of short-term rule quickly broken, but the military is simply unqualified to govern a nation of more than 80 million people of whom about 25 percent live below the poverty line. Nor is the military a democratically elected institution that represents the will and needs of the diverse Egyptian electorate.

After wasting 15 months of precious post-revolutionary time pressuring the military out of civilian governance, Egyptians simply cannot afford another protracted political battle with a military that starts out as a protector but quickly becomes authoritarian.

Get elections right the first time. Passage of a parliamentary election law riddled with unconstitutional provisions is fatal to all parties. After decades of fraudulent elections based on election laws that guaranteed the National Democratic Party’s (NDP) a political monopoly, a new election law was rammed through by the military with nominal civilian input. Despite warnings from legal experts, parliamentary elections were held prematurely, with political parties taking more than their fair share by running members for seats preserved for independent candidates. When a legal challenge was presented to the Supreme Constitutional Court, it had no other option than to strike down those provisions that denied constitutionally mandated equal opportunity and access to political office for all Egyptians.

More from CNN: Get ready for extremist backlash

While the court’s far reaching remedy of dissolving the entire lower house of parliament called into question their political neutrality, the blame for a poorly drafted election law falls squarely on the military regime and those supporting its rule after the revolution.

A properly drafted election law based on the input of non-partisan legal experts would have saved Egypt months of political and judicial crises and could have avoided the military coup currently underway.

Do not make the constitution the handmaiden of politics. When then President Mohamed Morsy issued a presidential decree in November 2012 that placed himself above the law in order to prompt a public referendum on the new constitution, he permanently tainted his credibility. His politically shortsighted, not to mention illegal, move sealed the fate of what could have been a legitimate roadmap for centuries to come.  Even if Morsy’s intent was to shorten the period of a legal vacuum arising from the absence of a constitution, his regime should have had the foresight to see the forest from the trees.

A constitution viewed as illegitimately passed, notwithstanding its substantive strengths, is of little value. The few months invested in engaging with a fractured political opposition and informing the public about key issues under debate would have been a small sacrifice in light of the grave consequences of yesterday’s military coup.

Do not assume all appointed officials are diehard loyalists. While few government institutions were left untouched by the NDP’s pervasive corruption, not every former government official was a Mubarak loyalist. Each public entity had its die hard supporters, many of whom were in leadership positions, but many government officials were pragmatists who kept their mouths shut in order to keep their jobs and provide for their families. Though morally weak and beneficiaries of financial corruption, they can be converted into following a transparent and democratic system imposed by the demands of the people.

Hence, calling for mass termination of public officials and judges, especially when they possess much needed skills, is a recipe for chaos. Despite the oppositions’ valiant efforts for systemic reform, many simply do not have the knowledge or skills to implement their lofty ideals. It is well worth the time to establish transparent procedures to weed out the irreparably corrupt and rehabilitate those willing to follow new rules developed to serve the people.

Egyptians are fully cognizant of the Mubarak regime’s mass theft of the public treasury. For more than three decades, a class of business and political elite stole billions of dollars from a nation that desperately needed the funds to fulfill its potential to become a regional leader in various industries.  But instead of invest in the people; illegitimate leaders took massive kickbacks, granted public contracts to their cronies, sold themselves public lands at rock bottom prices, and persecuted anyone that challenged their authority.

This corrupt class of folool, or Mubarak loyalists, is still deeply entrenched in every aspect of the economy, and they will stop at nothing to sabotage any new system that not only repossesses their stolen wealth but holds them criminally accountable for their financial and political fraud.

Egyptians are no Longer willing to sacrifice democracy for stability

The most important lesson for all current and future politicians is that Egyptians have been forever changed by the 2011 revolution.  No longer will they be used as pawns by political leaders, even if democratically elected, who engage in illegal governance tactics.  Their strong commitment to self-governance, as demonstrated in the latest round of mass demonstrations, has become a permanent fixture in the Egyptian political landscape. Elected politicians, opposition parties, and military leaders alike should take heed that any future attempts to exploit mass protests to their political advantage will ultimately fail.

With every mistake made, Egyptians are becoming more politically mature. They are no longer satisfied with lofty rhetoric unsubstantiated by action plans that incorporate their interests. They are willing to return to the streets when the public interest is disregarded in political processes and national dialogues.

But the cost of mass protests is high for the nation’s economy and further delays rebuilding a nation crumbling after a series of brutal dictators.  To make protests a permanent substitute for fair and free elections, national dialogue, and professional advocacy is to place Egypt in a perpetual state of uncertainty instead of a sustainable democracy.

In the end, it is Egyptians that have the most to gain from lessons learned and the most to lose for mistakes made. For their sake, let’s hope the learning curve is steep.

Next entry »Bipartisan cluelessness on Egypt
« Previous entryAmerica the undemocratic?