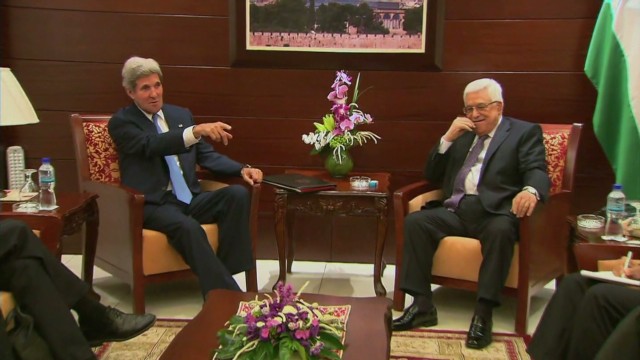 Editor's Note: Robert M. Danin is Eni Enrico Mattei Senior Fellow for Middle East and Africa Studies at the Council on Foreign Relations. He is the former director for the Levant and Israeli-Palestinian Affairs at the National Security Council. He writes the blog Middle East Matters at CFR.org. The views expressed are his own.

Writing in the Israeli daily Ma’ariv, Nadav Eyal characterized his country’s view of this week’s peace talks with the Palestinians as that of “cautious pessimism.” Palestinian public opinion is even gloomier. Mutual cynicism about the prospects for peace is not surprising, given that the two sides have been unsuccessfully negotiating an end to their conflict intermittently for over two decades. Having seen their hopes and aspirations dashed so many times before, why should this time be any different?

The initial indicators are not overly encouraging: That U.S. Secretary of State Kerry had to invest so much time and effort just to get Israelis and Palestinians to agree to meet suggests that he may want the talks more than them. Ultimately, it was Kerry’s sheer tenacity that made the price of saying no for the parties higher than acceding to the United States chief diplomat. But so far, what the parties have mainly agreed to is a process, not to a deal.

The prevailing view amongst diplomats and commentators is for talks to make any forward progress from here, the United States will have to be intimately involved, and more than just a host for talks. At a minimum, the U.S. is going to have to be an active broker and facilitator, goes the argument.

Yet in several instances of Arab-Israeli peacemaking, American efforts to broker peace so frustrated the parties that it helped galvanize one or both of them to make progress despite U.S. involvement. President Jimmy Carter’s intention to broker a Middle East peace conference in Geneva in 1977 convinced Egyptian President Anwar Sadat that peace would be more likely if he worked directly with Israel thereby precipitating his historic journey to Jerusalem. Similarly, Washington-hosted Israeli-Palestinian peace talks languished without progress after they were launched in Madrid in 1991, leading Israeli Prime Minister Yitzhak Rabin to reach a secret bilateral peace agreement with PLO leader Yasser Arafat in 1993.

For any talks to really move forward, Israeli and Palestinian calculations will have to change. That is what happened during the last serious major U.S. initiative: the Annapolis process launched in November 2007. Recall, those talks came on the heels of the horrific violence of the second Intifada that resulted in more than one thousand Israeli deaths and some 5,000 Palestinians dead. Few expected then Prime Minister Olmert, who had been elected to power on a platform arguing that Israel had no genuine negotiating partner, to become an ardent proponent of a negotiated peace.

What Olmert found, like many others involved in such efforts, is that negotiations themselves can be transformative, changing the cost-benefit calculations of one, if not both, sides in the talks. Indeed, the Annapolis talks benefited from the low expectations of the Israeli and Palestinian publics at the time. This allowed the two sides to pursue extensive talks in many channels away from constant media scrutiny and score keeping. In that quiet space, Israeli and Palestinian negotiators forged personal rapport, understanding, and yes, even some trust. The result was the most forthcoming Israeli territorial peace offer in history, one that produced neither a Palestinian yes or no.

Hoping that the parties will either change their calculations during the talks, or become so disenchanted with the United States that they may decide to make progress together is possible. But for now it is only a hope. This may give Israelis and Palestinians some reason to suspend their “cautious pessimism” while negotiations proceed. But not much.

Click here to cancel reply.
Next entry »What we're reading
« Previous entryU.S. needs to step up its Arctic game