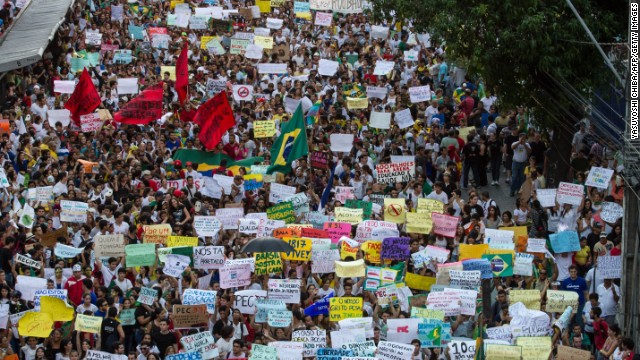 Are Brazil protests the new normal?

By Matias Spektor and Ryan Berger, Special to CNN

Brazil’s easygoing and upbeat international image has been upended in recent weeks. Popular demonstrations burst into the mainstream last month, when resentment over a nine-cent increase in bus fares intensified into an outpouring of anger on the nation’s streets at insufficient public services and rampant political corruption.

The protests continued last week in Rio de Janeiro to coincide with the first international trip of Pope Francis’s papacy. And they seem to have broad support among the public – a recent survey by Ibope indicated that 89 percent of Brazilians support the demonstrations.

What is happening in Brazil has undertones of discontent seen in Chile, where students have staged ongoing rallies for education reform, and Turkey, where mostly young protestors initially occupied a park over urban redevelopment plans and then railed against heavy-handed governance.

But what has sparked unrest now? After all, these are developing economies on the move. The International Monetary Fund, for example, notes that in the decade to 2013, Brazil’s per capita GDP in purchasing power parity grew by an estimated 64 percent, while Chile’s increased 77 percent and that of Turkey 82 percent (compare this with 33 percent in the U.S. over the same period).

Brazilian President Dilma Rousseff was quick to suggest that people have been protesting precisely because their lot has improved in recent years, and that they simply want more.

Yet this is only part of the story.

The reality is that millions of Brazilians who have been lifted from poverty – 35 million since 2002, according to official government statistics – could still hardly be described as middle class given the continued difficulties in making ends meet, persistent violence in many neighborhoods, and the abysmal quality of public services. Add to this the fact that Brazil remains one of the most unequal societies in the world, and it is easy to see why so many are still disillusioned.

More from CNN: A new age of protests

This disillusionment has been exacerbated by the lavish nine-figure sums spent on stadiums and the tax breaks awarded to big business for the glitzy 2014 World Cup and 2016 Olympics, all on top of the tens of millions of public dollars spent on last week’s World Youth Day.

But unlike Spaniards or Greeks, Brazilians are not generally angry about a lack of available jobs. With the national unemployment rate having hit a record low earlier this year, ordinary Brazilians have instead directed their frustration at perceived government deficiencies, a reality that is in keeping with Francis Fukuyama’s observation that “since the middle classes tend to be the ones who pay taxes, they have a direct interest in making government accountable.”

Tied to this dissatisfaction has been growing anger over political corruption. The same Gallup poll found that 70 percent of respondents believe corruption is widespread, a nine-point increase since 2010.

The 2013 protests have flat-footed lawmakers, forcing them to make a series of concessions on everything from weighing a plebiscite proposal on wide-scale political reform to passing an anti-bribery law that had for years been stalled in the legislature. Rousseff for her part called for more money to be directed to education, health and transportation, as well as tougher penalties on corruption. Governors are unveiling their own plans for similar reforms at the state level (although none of official responses has made any reference to reining in the type of brutal police crackdowns that led to the intensified June demonstrations).

Regardless, Rousseff’s referendum proposal has already been deemed unviable and her popularity has nosedived to 30 percent. Although the current wave of protests has died down from its June 20 apex – a national “day of struggle” on July 11 only brought out 100,000 nationwide – they may well be rekindled in the run-up to next year’s World Cup.

Of course, an increasingly engaged citizenry is hardly exclusive to Brazil, Chile and Turkey; rather, it is a harbinger of future trends across emerging economies.

The Asia-Pacific warrants particular attention. Homi Kharas of the Brookings Institution forecasts the region will be home to two thirds of the global middle class in 2030, compared to just 28 percent in 2009. As the center of economic gravity shifts eastward, the tensions created by these changes will create challenges for governments across the region. Indeed, this is already happening, as has been seen in countries including China and Vietnam. And while Brazil’s democracy can absorb the “heat from the streets,” it is unclear whether leaders in undemocratic nations will be able to hold onto power when confronted with waves of demonstrations. Beijing and Hanoi should be looking at the developments in Brazil as a warning sign.

As those in emerging economies begin to speak out, they will certainly demand better public services, as they have done in Brazil. But more than anything, their protests will challenge the assumption that they are consumers in booming markets rather than citizens in deeply fractured societies. Protests like those seen in Brazil may therefore be the new normal.