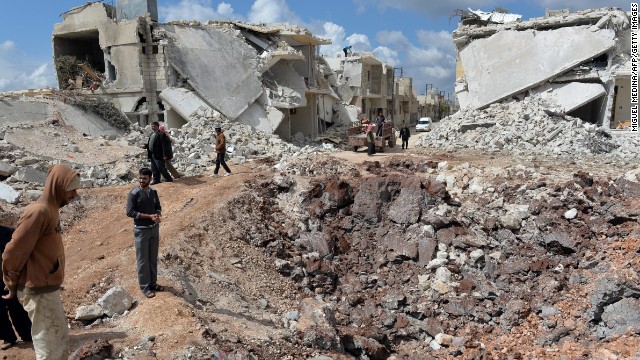 Prevention better than punitive in Syria

By Michael Shank and Rep. Raul Grijalva, Special to CNN

Editor’s note: Michael Shank is director of Foreign Policy at the Friends Committee on National Legislation. U.S. Congressman Raul Grijalva (D-AZ) is the co-chair of the Congressional Progressive Caucus. The views expressed are their own.

But before spelling out ways we can help bring peace to Syria, it’s worth first identifying some problematic trends in America’s tack towards war. This is not unique to President Obama and was visible in past presidents’ penchant for war. There is a precedent here.

First, the idea that America can be “precise” and “limited” and “strategic” while attacking another country is completely misplaced. It inevitably leads to further or escalated violence.  It always has.  We wanted to be brief, precise and strategic in Iraq by bombing Baghdad, thinking “shock and awe” would intimidate the country and its recalcitrant leader into submission. This is not dissimilar to how we are now thinking that a “punitive” strike on Syria would send a stern message that President Bashar al-Assad, one to which he would be responsive.

Never mind the fact that al-Assad has made it clear that he’s not operating from a rational place, and would never respond rationally to punitive measures – there is no way that a strike on Damascus would last only three days, as the Pentagon has predicted. The responsibility for the ensuing chaos – from scores of civilians dead to increased likelihood of chemical weapons use – would fall on the United States.  We would be embroiled in an unraveling that would beckon more missiles, more troops, and more air and sea support. Observe every major U.S. intervention over the last 15 years. This is exactly what happened, despite the rhetoric of precise, limited, strategic and brief action.

More from GPS: All or nothing Syria

Second, the idea in Washington that an attack, strike, or punitive action, is not an “invasion”, is an absolute fallacy. This is a relatively new definition promulgated by Washington’s defense community, and the think tanks that support it.  It’s a convenient semantic reframing so that America is not perceived as the “evil Western invader” – or part of some, to quote President Bush, “crusade” – but rather seen as a short-lived intervener, a savior who will exercise discretion while quickly getting in and getting out.

The problem with this attempt at a reframe is that the rest of the world – especially those being bombed by America – doesn’t consider it anything less than an invasion, whether by air, sea or land. Boots on the ground is not the only kind of invasion. There are air invasions, with air raids (see Iraq) or drone strikes (see Yemen or Pakistan or Somalia).  There are sea invasions, with Tomahawk missiles launched from ship (see Libya and the same plan for Syria).  And there are ground invasions, with massive troops on the ground (see Afghanistan).

Third, the idea that we must act in haste, and bomb quickly without Congressional approval or authorization, is a dangerous undermining of the checks and balances instituted by our founding fathers. Most presidents, when planning for war, impress upon the American people the urgency of now, of invading immediately, because we don’t have time for Congressional oversight. Syria is an excellent example of this. With some 100,000 dead over nearly a two year time span we’ve had plenty of time for talk between the executive and legislative branches.  The estimated 355 dead from the alleged chemical weapons attack, while absolutely deplorable, shouldn’t have created a new urgency that wasn’t already there.  We should have been talking about preventing mass atrocities years ago, not after the house of Syria was nearly burnt down.

More from CNN: Has Obama made case?

So what to do now? Invasion is the wrong course because it merely inflames the violence further, both within Syria and without. We must exhaust the following paths first before seeking a military course of action.  Convene all the stakeholders who have a say with Syria’s al-Assad and who can put pressure on the president. That means more than just Russia, our go-to on the Geneva II peace talks. That means everyone from Iran, Lebanon, and Hezbollah, to the Arab League and the Organization of Islamic Cooperation. These are the entities that have entry into the Syrian president’s inner circle. If we truly want al-Assad to act differently, we have to talk to those who have sway.

Then, if the diplomatic track fails to work, and after it has solidly been exhausted, we must engage the U.N. Security Council in a conversation about the International Criminal Court and an indictment of Assad for committing war crimes and crimes against humanity.  This path is consistent with America’s support of international law and the ethical frameworks undergirding the Geneva Conventions.

Throughout this process, we must continue work with the United Nations to not only ensure weapons inspections are executed properly over the coming weeks, and weapons flows and arms trafficking are stopped or slowed, but that we ramp up humanitarian aid for the millions of refugees inside Syria and in neighboring countries. This is essential if we care about saving Syrians.

This is the path we must pursue and the only way forward. It is time for something preventive before we press play on the punitive.

Topics: Middle East • Syria
Next entry »Why Fukushima is worse than you think
« Previous entryAll or nothing in Syria