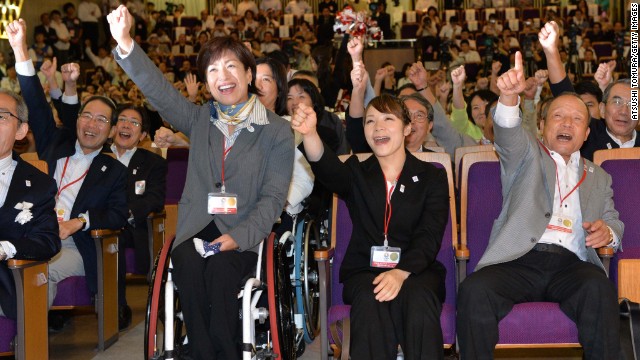 Is Japan really back?

By Victor Cha, Special to CNN

Editor’s note: Victor Cha is a professor at Georgetown University, senior adviser for Asia at CSIS in Washington D.C., and author of Beyond the Final Score: The Politics of Sport in Asia. The views expressed are his own.

In August 1964, a nineteen-year-old track athlete ascended the long flight of stairs to light the stadium flame that would signal the start of the Olympic Games. The young man, Yoshinori Sakai, was born the day the United States dropped the atomic bomb on Hiroshima in 1945. There could not have been a more powerful way to demonstrate how the Tokyo Olympics marked the death of wartime Japan, and the re-birth and re-emergence of the country on the international stage as an advanced industrial democracy.

Japan’s hosting of the 2020 Summer Olympics will be no less significant. In 1964, Tokyo stood as the first Asian site in the Olympic era. While many Olympics have since come to Asia (Sapporo, Japan in 1972, Nagano, Japan in 1998, Seoul in 1988, Beijing in 2008, Pyeongchang, Korea in 2018) it will have become the first Asian city to host the mega-event for a second time.

While offering the Olympics to a young, vibrant Muslim country for the first time (Turkey) would have been cool, the International Olympic Selection Committee’s choice of Tokyo seemed well-advised.   Japan’s technical bid was the strongest and the most realistically priced (at $6 billion to $8 billion, versus Turkey at an extravagant $19 billion and Madrid at a paltry $2 billion). Experience was on Japan’s side, having hosted three previous Winter and Summer Olympics.  Tokyo also offered a stable political environment, compared with Istanbul, for example, which borders the conflict in Syria. And, unlike the other two, Japanese world class athletes had not suffered from recent doping scandals.

But more than this, the International Olympic Committee’s anointing of Japan fits the narrative that “Japan is back.”  This mantra, first espoused by Prime Minister Shinzo Abe at a speech in Washington DC in February, means that after almost two decades of economic stagnation, political malaise, and weak leadership that put Japan teetering on the brink of has-been status, it is returning to prominence on the world stage. The globe’s third largest economy is experiencing real growth for the first time in years. It has a prime minister who will likely stay in office for at least a couple of years (compared with the revolving door of incompetents that preceded him). It is seeking greater military authorities commensurate with its economic strength, and its youth, for the first time in a long time, identify with pride with a bright future for the country.

More from CNN: What is the true cost of hosting the Olympics?

Olympics have a way of benchmarking a country’s development. In 1964, the country worked at a feverish pace to build the elevated highways, five-star hotels, and bullet train system that we today associate with modern Tokyo. The entire population focused on putting their best foot forward to host the world. There undeniably will be the same sense of purpose for 2020. If March 2011 marked the country and people’s lowest point after the devastation of the tsunami, earthquake, and nuclear meltdown at Fukushima, the opening ceremony of the 2020 Games will be the country’s calling to show its full recovery to itself and to the world. That is what Olympics do. They compel countries to fulfill not just their athletic potential, but also their national aspirations in the compressed time period it takes to prepare for the games.

In the countdown to 2020, there will be many questions about whether Japan will be prepared to host the spectacle that the Olympics have become. After all, they are not planning to spend the $40 billion that the Chinese spent in 2008 to host in Beijing. The same questions abounded in 1964, but Japanese meticulousness answered them all. Every stadium was operating. Every signboard was painted. Every piece of scaffolding was removed. Even a wholesale refitting of every hotel with imported bed frames to accommodate Western-sized bodies was completed on schedule (Japanese bed makers did not produce the larger size).

The bigger question is whether Japan as a nation will be ready.  Will so-called “Abenomics,” which has created growth thus far through monetary easing, have successfully laid the groundwork for the structural and regulatory reforms essential to put the economy on a healthy footing? Will the radiation leakages at the Fukushima-Daiichi nuclear complex have been permanently stopped? Will tensions with China over historical and territorial issues have inflamed further or been resolved peacefully? Will Japanese society have accepted the need to remedy its labor shortage with integration of women and immigrants in the workforce?

In this sense, the Olympics pose a challenge for Japan – not just for its athletes, but for the nation and its leaders to demonstrate that it has answers to these and other questions about the nation’s future.  Because on the evening of the opening ceremonies seven years from now, the world will want to embrace a Japan that “is back.” The clock starts now.