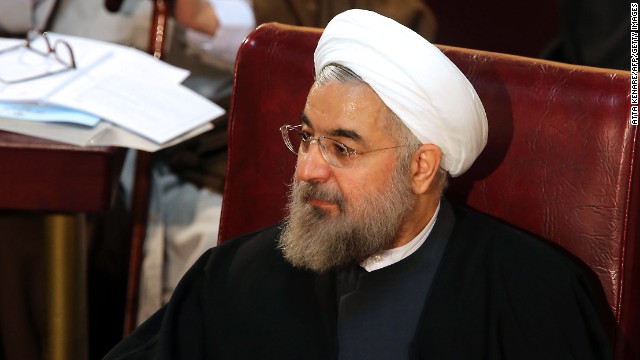 CNN speaks with Fareed and former New York Mayor Rudy Giuliani about the apparent softening in Iran’s rhetoric under new President Hassan Rouhani. This is an edited version of the transcript.

What do you think of the changes going on in Iran? Clearly it seems like President Hassan Rouhani is certainly a lot different at least in tone than Ahmadinejad?

Giuliani: No question, the tone is completely different. The question is, is this credible or is this just a way of buying time so they can continue to either enrich uranium or maybe even stop that for a while.

Do you think it's credible?

Giuliani: I begin by being very skeptical because of the history, because they played us for a fool before, Rouhani actually even bragging about it. I have to look at that history and say, there’s a really good chance they’re doing it again. At the same time, you can go ahead and talk to them and you can go ahead and try to test this out and see is there a change.

Zakaria: Look, I think these are very promising signs. You have to test it. They have in the past had a strategy of talking and not delivering. Here’s what’s different this time. Rouhani campaigned on this idea of being able to make a deal with the West so that he could ease the sanctions. Clearly the sanctions are what are behind this and they feel the pain.

There are the makings of a deal. You want to test it and make it step by step. You don’t want to make the concessions before they allow the inspections. What gives me some hope is that Rouhani, unlike Ahmadinejad, is an insider. He’s known the Supreme Leader since 1980. He has worked within this establishment. He’s a cleric.

Rouhani continues to say, though, that Iran has no nuclear weapons program. Should that concern us he was saying that or just talk?

Giuliani: Assad was saying that until a day before he agreed at all, to allow inspections of the chemical facilities. I think Fareed is correct in the sense that Rouhani is putting out different signals than in the past. I even think being a skeptic that this is a little different than it was six or seven years ago. I don't think this is to buy time to just increase uranium and enrich it more.

So the key to me here is I think it is pretty simple that the administration can be tough and not drink the Kool-Aid. I think if we say, all right, you want relief from the sanctions, we want to inspect all your facilities and then allow those inspections to take place for five, six, seven months and make sure they're not doing what they did five, six years ago, throw the inspectors out and make sure we have not only a change of words but change of action.

Should President Obama meet with Rouhani this week?

You would say secretary of state, meet with him?

Giuliani: I think Fareed is right. I come from the old school of the president walks in when the deal is done and blesses it. All the hard work is done before the president is there. You don't put your president in a position of having somebody walk out on him, having it backfire. And if something goes wrong you don’t want the president blamed for it.

Get all the details worked out. The main thing I would be concerned about in watching this is let’s not give away anything until we have a verification program in place and we’re actually executing it and our inspectors are confident that they’re being given the access they were previously denied.

Topics: Iran
Next entry »We are losing fight against al-Shabaab
« Previous entryIs Japan really back?

Next entry »We are losing fight against al-Shabaab
« Previous entryIs Japan really back?