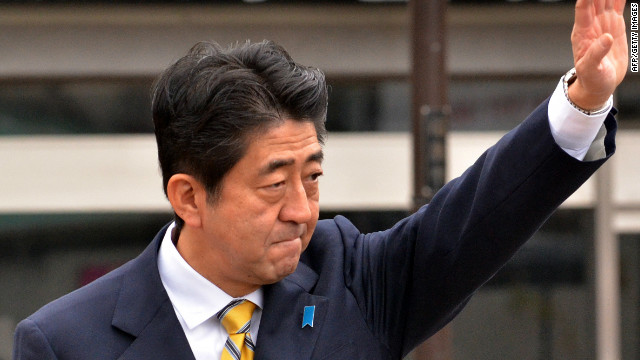 By Takanori Sonoda, Special to CNN

Editor’s note: Takanori “Tak” Sonoda is a senior fellow at the Mansfield Foundation.  He was previously a vice president of government relations for Honda North America based in the company’s Washington, D.C., office. The views expressed are his own.

Japan got a shot in the arm when it was chosen earlier this month to host the 2020 Summer Olympic Games, a decision that allows the Japanese people for the first time in decades to coalesce around a common national goal, namely the successful execution of the 2020 Olympic Games in Tokyo. But while broadly welcomed, the announcement also highlighted a number of major challenges facing Japan’s government.

For a start, there is now even greater pressure on the government to bring an end to the leakage of contaminated water from the Fukushima nuclear power plant. Prime Minister Shinzo Abe assured the International Olympic Committee that the Fukushima situation was under control. But reports suggest that at least 300 tons of contaminated water has leaked into the sea from the crippled nuclear power plant site. Indeed, last month, the seriousness of the water leak was raised to a level 3 on the International Nuclear and Radiological Event Scale (INES), indicating a “serious incident.”  Tokyo Electric Power Company, which operates the plant, has for its part repeatedly failed to provide the public with accurate information on the situation.

More from GPS: Why Fukushima is worse than you think

More than two years have passed since the March 2011 earthquake and tsunami, which first triggered the crisis, and yet we still are not out of the woods. All this has raised the question of whether the Abe government has the leadership skills necessary to seize control of the situation, rather than simply urging TEPCO to work harder.

Tied to the problems at Japan’s nuclear facility – which prompted the government to shut down most of Japan’s nuclear power plants – is the long-term environmental implications of the corresponding increased use of fossil fuels. True, despite record temperatures this summer, Japan somehow managed to avoid electricity shortages. Yet nuclear power plants used to generate more than 30 percent of the country’s total electricity, and their closures have meant that Japan is increasingly dependent on ever more costly natural gas.

The third challenge ahead of the 2020 games will be to prepare the country for the “next” mega earthquake. National broadcaster NHK recently ran a series of TV programs focusing on the possibility of mega earthquakes – those with a magnitude greater than 8 – in the Kanto, Tokai and Nankai regions. Sadly, the question is not if these will eventually occur, but how the government will respond. Complicating this further is the fact that the Hamaoka and Ikata nuclear power plants are located close to the projected epicenters of future major temblors, while Japan’s major urban areas of Tokyo, Osaka and Nagoya – which together are home to half Japan’s total population – are seen as vulnerable. Clearly Japan’s government has much work to do if it is to avoid the tens if not hundreds of thousands of projected fatalities becoming a reality.

More from GPS: Is Abe ready for Japan's expectations?

And, with another three years before the next general election, Abe has plenty of time to get to grips with these issues and a fourth, arguably most pressing, challenge: reviving Japan’s economy.

But as if this weren’t enough, the Abe government is also set to confront serious foreign policy challenges, especially managing often prickly relations with South Korea and China. Indeed, tensions with the latter could flare over the disputed Senkaku Islands, and fears of a military confrontation no doubt sit disconcertingly at the back of the minds of those preparing for Tokyo’s moment in the spotlight.

Japan therefore needs to carefully manage its relationship with China, avoiding getting caught up in nationalist sentiment while at the same time being willing to act firmly in much the way British Prime Minister Margaret Thatcher did in the 1980s, when she faced down a challenge from Argentina for the Falklands.

Yet first Abe must tackle the related challenges of a moribund economy and an ongoing nuclear crisis, because failure to rebuild confidence after Fukushima raises some awkward questions. For a start, under the Treaty on the Non-Proliferation of Nuclear Weapons, it will be difficult for Japan to justify reprocessing of uranium and plutonium if it does not use the reprocessed materials for electricity generation. And without the engineering foundations offered by a domestic nuclear industry, will companies like Toshiba and Hitachi be able to maintain and train nuclear engineers in Japan that can operate abroad? Will Japan be able to maintain a global leadership in the civilian use of nuclear power plant technologies?

These are just some of the issues that Abe’s government will need to address more effectively than was the case with the relatively short-lived Democratic Party of Japan government that he succeeded last year. And while the awarding of the 2020 Olympics to Tokyo is welcome in that it creates a national goal that can help restore Japan, there is clearly much to be done if Japan is to show the world that it can rise above its current challenges.

If Abe can offer a clear vision of what Japan would like to be in the next decades – and the role it would like to play in the world – then the Olympics could be a real value. The question is whether he can tap into the sense of unity that the Games offer to help Japan face what lies ahead.