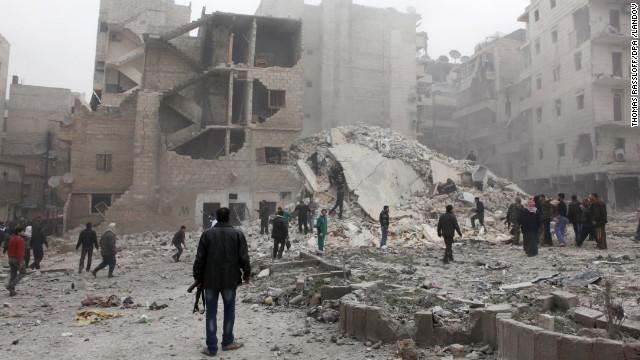 Why U.S. should back ICC role in Syria

By Balkees Jarrah, Special to CNN

Editor’s note: Balkees Jarrah is international justice counsel at Human Rights Watch. The views expressed are the writer’s own.

Washington’s response to the chemical weapons attack in Syria has been imbued with words ordinarily reserved for a courtroom. President Barack Obama and Secretary of State John Kerry have spoken of “accountability,” “impunity,” “punishment” and even “standards of proof.”  Yet, the United States, curiously, has made little mention of criminal justice for the atrocities committed not only in the Damascus suburbs on August 21, but across Syria since 2011.

With renewed activity at the U.N. Security Council on Syria, there may be a chance for the Obama administration to match its rhetoric with its actions by publicly backing a role for the International Criminal Court.

Because Syria is not a member of the treaty that established the court, the Security Council would have to give it jurisdiction through what’s known as an “ICC referral.” A draft of a new Council resolution prepared by France, leaked to the media on September 13, included an ICC referral. It’s unclear though what the U.S. position is, in principle, on engaging the court.

The ICC is by no means a panacea for the situation in Syria, and nobody claims that the court’s involvement will stop the killing overnight. Diplomatic and humanitarian activities are critical to resolving the crisis. But a U.S. decision to get behind an ICC referral would signal that the administration is serious about its commitment to end impunity in Syria. Crucially, bringing the court into the picture would send a clear message to all parties to the conflict that grave crimes will carry serious consequences. Indeed, raising the price on today’s abuses has real potential to influence tomorrow’s behavior and help deter further atrocities.

More from GPS: Justice at The Hague?

The Obama administration has given mixed signals about its support for the court’s involvement in Syria. U.S. officials have sidestepped the question by pointing to the improbability of Russian acquiescence, at the same time voicing a preference for some kind of hybrid court. Together, this gives the distinct impression that Washington is, in fact, not in favor of an ICC referral.

Russia’s objection to an ICC referral should not be seen as irreversible. To successfully press Moscow on the issue, though, it needs to be clear that a global coalition of countries stands behind the measure, including members of the Security Council itself. More than 60 countries already do, including six Security Council members: France, the United Kingdom, Luxembourg, Argentina, Australia, and South Korea. It’s time the U.S. followed suit.

Russia has described the effort to seek an ICC referral as “ill-timed and counterproductive,” touching on the long-running debate about whether seeking justice interferes with prospects for peace.

In fact, the record from past conflicts, such as in the Balkans in the 1990s, indicates that criminal indictments of senior political, military and rebel leaders can actually strengthen peace efforts by delegitimizing and marginalizing those who stand in the way of resolving a conflict. At the same time, the failure to hold those responsible for the most serious crimes to account can fuel future abuses. In Syria, we see this playing out in excruciating terms as abuses continue, aggravated by a complete and utter climate of impunity.

Referring Syria to the ICC is a crucial first step toward accountability for the crimes by all sides, whether by government forces, opposition fighters, jihadists, or other militias. It would set a valuable reference point for other judicial initiatives, including national trials and even potentially some kind of mixed judicial entity, which US officials have indicated they are working toward establishing. Other non-judicial measures will also be required, including truth commissions, reparations, and institutional reform. None of this is going to happen quickly or easily in Syria, but all will be essential.

It was just a year ago that Russia described the ICC as a “serious new tool” that the Security Council could use to address the fight against impunity. The United States expressed a similar view. Both countries participated in a unanimous Security Council vote in 2011 to give the ICC jurisdiction in Libya. Perhaps they should use this rare meeting of the minds to start to unfasten the deadlock on Syria and refer the situation in Syria to the court.