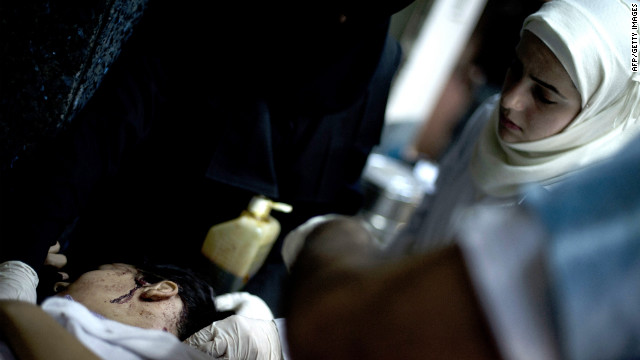 By Jerusha Murugen, Special to CNN

Editor’s note: Jerusha Murugen is the research associate for global health, economics, and development at the Council on Foreign Relations. You can follow her @Jerusha_Murugen. The views expressed are her own.

In the midst of a bloody civil war, the biggest killer in Syria may not be the one you expect: chronic disease.

For many thousands of Syrians who struggle to access medical treatment in a war with no end in sight, everyday medical conditions have now become a matter of life or death.  Dr. Zaher Sahloul, president of the Syrian American Medical Society (SAMS), estimates that as many as 200,000 Syrians have died from chronic conditions, such as cancer, diabetes, hypertension, and respiratory and heart conditions, as a result of lack of access to drugs and treatment, double the number of Syrians killed by combat operations.

This stands in contrast to the situation prior to the conflict, when many Syrians received consistent care for these illnesses, with such treatment accounting for a significant portion of Syria’s health services. The United Nations now estimates that over half a million Syrians will require chronic disease treatment for the remainder of 2013.  Of this figure, more than 400,000 Syrians alone are expected to require diabetic care.

Syria was once known for its established health care system and cadre of domestically-trained medical workers.  Indeed, with a constitution sanctioning comprehensive public health services, its health ministry provided virtually free medical treatment to the Syrian public. Syria had its own drug industry, producing 90 percent of its medicines. It was also the second-largest pharmaceutical manufacturer in the region, exporting medicines to over 50 countries. As a result of this strong health care infrastructure, Syria had health indicators comparable to high-income countries, with an estimated life expectancy of 76 years.

More from CNN: Syria problem not going away

But over the last two years, Syria’s health care system has undergone a tragic transformation. Continued assaults on hospitals and medical providers have resulted in parts of Syria experiencing as much as a 70 percent decrease in health personnel. The World Health Organization (WHO) estimates that 20 percent of Syrian public hospitals have been damaged and 37 percent are now inoperable. Ambulance services have weakened dramatically, with nearly 80 percent of vehicles damaged and over 50 percent disabled. Its once flourishing drug industry has suffered a 90 percent production decline in the pharmaceutical capitals of Rural Damascus and Aleppo, sites of intense combat.

Today, accessing medical care can be a life-threating endeavor for Syrians. Those willing to venture out face traveling in a war zone and navigating numerous military and discordant rebel checkpoints. Patients seeking treatment do so with the understanding that health facilities may come under attack at any moment. Its pharmaceutical industry faces numerous hurdles as well, including shipping across the country, importing raw materials, and denial of credit by foreign banks for such purchases.

As a result, of all this, Syrians are now facing a critical shortage of medicines, particularly for chronic illnesses – WHO surveys indicate that basic supplies, such as insulin for Syria’s 40,000 juvenile diabetes patients, are no longer available. Residents face frequent pharmacy stock outs or more simply cannot afford available medicines. Given these conditions, the Union of Syrian Medical Relief Organisations (UOSSM), a Paris-based NGO, estimates that 70,000 cancer and 5,000 dialysis patients are not receiving the treatment they need.

More from GPS: Why water is key to Syria conflict

U.N. aid deliveries are also tightly controlled. Official aid must be routed from government-controlled Damascus, from where it is closely monitored as it travels through government checkpoints. U.N. agencies have been further restricted, with reports of soldiers at checkpoints removing most or all WHO supplies before reaching opposition-held areas or flatly denying medical deliveries.

In response to these obstacles, this month more than fifty leading medical physicians, including Nobel Prize laureates and heads of major medical organizations, issued an open letter to all parties involved in the conflict requesting unimpeded access, cross-border and otherwise, to allow for critical medical treatment to Syrians caught in the cross-hairs of war, in the esteemed global health journal The Lancet.

Though the United Nations will not violate the Syrian government’s sovereignty, other entities, such as SAMS and the UOSSM, are willing to provide aid from international borders. The French government has previously donated medical supplies, including heart medications, through UOSSM. This group has delivered and distributed such aid from Turkey to Syria, providing critical drugs to thousands of Syrians. Efforts like these should be scaled up, with international pharmaceutical companies and governments donating specific medicines to NGOs willing to engage in cross-border assistance.

While finding a solution to Syria’s civil war will continue to be difficult, resolving its chronic disease crisis should not be. With the United Nation’s hands effectively tied, other actors must now act where the international community cannot.

Topics: Conflict • Syria
Next entry »Zakaria: This is stupid government
« Previous entryCan Iran or U.S. say yes to a deal?

Next entry »Zakaria: This is stupid government
« Previous entryCan Iran or U.S. say yes to a deal?