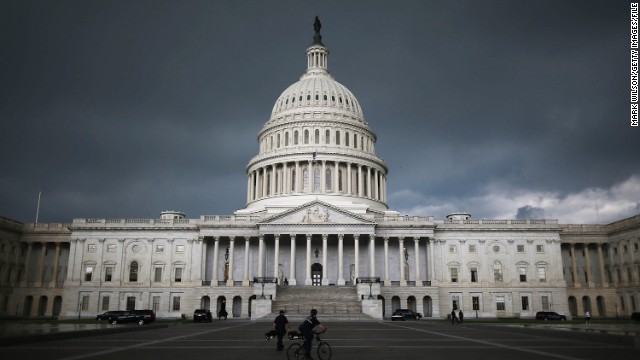 Zakaria: This is stupid government

CNN speaks with Fareed about the gridlock in Washington, the U.S. economy and why the lack of investment in America’s future matters. This is an edited version of the transcript.

President Obama’s former defense secretary, Leon Panetta, spelled out the price of governing from crisis to crisis.  He wrote recently in an op-ed, "U.S. citizens will lose trust in our system of governing and the world will view the United States as less able to back its word with power."

How much does this eternal internal struggle in Washington damage us in the eyes of the world?

I think it does. Right now, we don't have a competitor. And so it seems as though we can careen from crisis to crisis and there really doesn't seem to be much of a price to pay. With the American economy, the recovery is continuing.

But there are two areas. First is the credibility of American government. We benefit enormously from the fact that the dollar is the reserve currency of the world and our Treasury bills are the reserve investments of the world. If that changes, if people start worrying about getting repaid – as they should frankly worry, given what we're doing – that would change things dramatically. It raises huge costs for the United States.

The second is, in all this crisis management, nobody is talking about what we should be doing for the long term in this country. We are seriously underfunding investments in education, in infrastructure, in basic science. That's the seed capital that produces growth. You know, we had these slogans where people said it's not about big government or small government. It's about smart government. Well, right now what we are doing is stupid government.

And when you look at how petty and stupid it is in Washington, and sometimes there's a news event around the world that really puts it in perspective. For example, more than 60 people killed in Kenya, terrorists attacking a mall, raising a lot of fears about soft targets around the world and here in the United States.

The Al Qaeda leader Ayman al-Zawahiri said he's encouraged his followers to force the United States to spend more on security in order to, quote, "bleed America economically." Does all the fighting over the budget telegraph an economic vulnerability?

Well, I think people see that we're dysfunctional. They see that we can't get our act together, we don't have a strategic plan.  I wouldn't worry too much about Zawahiri. He hasn't been able to orchestrate anything in years. That al Qaeda central, the guys that planned 9/11, are really on their heels. We've pushed them back.

He's just throwing out an insult.

He's just trying to get something going. He knows that the only thing he can do, really, is try to encourage somebody out there to walk into a mall because he can't plan any of it.

And by the way, I hate to put it this way. If we spent more on security right now, it would be good for the economy. What the economy needs is more spending and more consumption.

Switching gears. Russia’s leader, Vladimir Putin, took to the New York Times recently, where he criticized the president and his policies, and he did that directly to the American people. And then the president's 2008 Republican opponent, Senator John McCain, responded with an anti-Putin op-ed to the Russian people. He said this: "I believe you deserve the opportunity to improve your lives in an economy that is built to last and benefit the many, not just the powerful few."

He was writing to the Russian people about an economy that benefits everybody. And we looked at these statistics. In 1989, the year the Berlin Wall fell, the ratio of CEO compensation to the average worker was 58 to one. Last year it was 273 to one. The poverty rate in '89 was 12.8 percent. Last year it was 15 percent.

The typical American family now makes less than it did in 1989, Fareed, when you adjust for inflation…A lot of people here are saying, wait, I don't feel like this economy is fair for me.

Look, we're a lot better off than Russia, but I think your point is valid.  And part of this is broad structural trends. There's globalization, there's technological change, there's the rise of the knowledge economy – all that creates a winner-take-all system. And the successful CEOs tend to do very well, partly because their compensation is tied to the stock which rises.

But that's all the more reason why we should be making public investments in education, in daycare, in things that can help people move up the ladder of opportunity.  I don't begrudge CEOs doing very well, but I want to make sure that anyone can get to be a CEO and the game is not set so that if you get to school when you're 6 years-old and you're malnourished and you haven't had any kind of pre-K, we now know you're not going to do well in school, and that means you're not going to get into a good college. And that's the trend we have to stop.

And again, as I say, part of that is our stupid government, that is, the inability to get anything done means we don't invest. We don't spend much money on poor people in America. We think we do. We spend a lot on the middle class. We have lots of subsidies, lots of…

…and a bunch on the rich, but the poor are actually neglected, and it's something of a scandal.

One of the things that's clear is the country with the most prepared and best educated workforce is the one that's going to win. The next leader is the one with the best workforce. Are we investing in our workforce?

We're not at all in the sense that we're talking about. What does it mean to have a good workforce? It means you need to have them educated and you need to have the ability to retrain them because some jobs are going to go away, some industries are going away. We do early education very badly. We do secondary education badly and we do job training badly. And in all these cases, while there are lots of reforms that need to take place, it's also true that you just have to spend more money on some of the areas we're not spending it on, and I can't see Washington doing that right now.