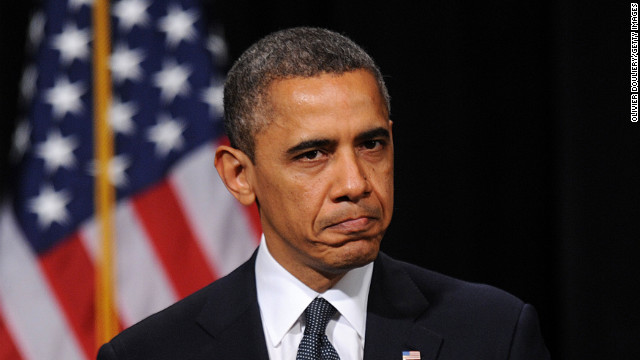 President Barack Obama has demoted liberty and democracy as primary U.S. foreign policy goals, at least where the Middle East is concerned.  So the president informed the world in his address to the United Nations last week.

Obama said four “core interests” would henceforth guide U.S. policy toward the Middle East and North Africa: protecting our allies, ensuring the flow of oil, fighting anti-American terrorists, and preventing the use of weapons of mass destruction. While he said U.S. efforts to “promote democracy, human rights, and open markets” will continue, they are now relegated explicitly to the second tier of U.S. interests.

Not so fast Mr. President. Shouldn’t Democrats at least be questioning Obama’s logic, if not raising objections?  After all, the president’s embrace of realpolitik is at odds with the party’s liberal internationalist outlook, which on balance has served America and the world well for seven decades. And it collides with America’s strategic interest in banking the fires of political violence and extremism in the world’s most turbulent region.

Since he took office, Obama has displayed deep ambivalence about using U.S. power to advance the nation’s liberal ideals. Early on, he was at pains to distance himself from George W. Bush’s “Freedom Agenda,” which unwisely conflated U.S. support for democracy with military intervention.  In 2009, Secretary of State Hillary Clinton told Congress the new administration’s foreign policy would revolve around diplomacy, defense, and development, pointedly omitting a fourth “D” – democracy.

More from GPS: Americans have had enough of conflict

But on other occasions Obama has sounded more like his Democratic predecessors in affirming America’s unapologetic support for liberal democracy around the world. Here’s what he told the U.N. General Assembly back in 2010:

“Yet experience shows us that history is on the side of liberty; that the strongest foundation for human progress lies in open economies, open societies, and open governments. To put it simply, democracy, more than any other form of government, delivers for our citizens.”

Now the president seems at last to have resolved his long-running argument with himself in favor of foreign policy “realism” over liberalism. He sounded less like Harry Truman, John Kennedy or Bill Clinton, and more like George H.W. Bush and his national security adviser, Brent Scowcroft. Even as communism was imploding in the late 1980s, Bush and Scowcroft showed more concern about “stability” than aiding the captive peoples rising up for freedom across the Soviet bloc. And after the 1989 massacre of pro-democracy protesters in Tiananmen Square, Bush – in what many observers considered indecent haste – dispatched Scowcroft to Beijing lest the Chinese government feel “isolated.”

Offering his own example of realism, Obama vowed to maintain a “constructive relationship” with the Egyptian military junta, despite its disregard for niceties like elections and its bloody crackdown on the Muslim Brotherhood. “Our approach to Egypt reflects a larger point: the United States will at times work with governments that do not meet the highest international expectations, but who work with us on our core interests,” Obama said.

But that has always been the case, and until the millennium of universal democracy arrives it always will. The real question is how to strike the right balance between securing the cooperation of autocrats on “hard” national interests while siding with their subjects’ aspirations for liberty and a say in how they are governed. Otherwise, we’ll earn the enmity of oppressed peoples everywhere and squander the moral authority on which America’s “soft power” rests. For an extreme example, look at Iran’s Islamic Republic, for which anti-Americanism is a foundational principle.

Now Obama wants to test President Hassan Rouhani’s professed desire to negotiate an end to the nuclear confrontation, and hastens to reassure Iran that the United States is not interested in “regime change.” But what happens if talks collapse again, or simply buy time for Iran to enrich enough uranium to make nuclear bombs? Over the long-term, our best hope for better relations with Iran rest on internal political change that gives rise to a more representative and less outwardly aggressive government.

Likewise with what Obama described as America’s other top Middle East priority, resolving the Arab-Israeli conflict. Israel can’t be expected to negotiate a settlement with a Palestinian community split in two camps, one of which denies its right to exist. Until Palestinians can compose their differences and form a unitary and, one hopes, secular and representative government, Israel has no partner for peace.

It’s not surprising that President Obama wants to limit U.S. exposure in the Middle East. Americans are deeply frustrated by the meager results of our costly military interventions there, by the “Arab Spring’s” dispiriting descent into chaos and despotism, and by nihilistic violence against (mostly Muslim) civilians perpetrated by Islamist fanatics. As the president says, we are tired too of the credulous conspiracy-mongering that alternately blames us for causing or failing to fix the region’s problems.

But such is the lot of a superpower.  In any case, it makes little sense for Washington to ignore or downgrade the “values dimension” of American power.  Like Europe a century ago, the broad Muslim crescent from Afghanistan to Morocco is convulsed by ethnic, religious and national feuds. It is hatching virulent ideological rivalries and most of its governments lack solid foundations of political legitimacy. (Hereditary monarchies seem the most stable).

It is foolish to imagine that in today’s interconnected world we can quarantine the region, tending only to a few “hard” security interests while praying that its upheavals won’t spillover and affect us. We thought the same thing about Europe a century ago, and it took two calamitous hot wars and the Cold War to finally pacify that region.

Obama is right that the United States ought to be humble about our ability to shape events in the Middle East. But we should always throw America’s weight behind popular hopes for greater economic and political freedom. And for democracy too, because as a means of sharing power, enabling compromises and trade-offs, and managing social pluralism, it’s the only plausible alternative to the region’s zero-sum politics of guns, rockets and car-bombs.

That’s why this is exactly the wrong time for America – and especially for a Democratic president – to give up on liberal democracy.