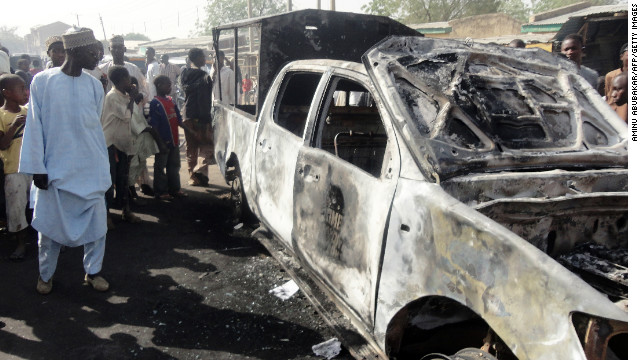 Editor’s note: Robert P. George is the chairman of the U.S. Commission on International Religious Freedom (USCIRF). The views expressed are his own.

As Nigeria considers its future following this week’s celebration of its 53rd anniversary of independence, its leaders must confront a real and perhaps growing threat to the nation’s stability – Boko Haram. The radical Islamist group, whose name literally means “western education is a sin,” regards Nigeria’s federal and northern state governments, as well as the country’s political and religious elites, as morally corrupt. It rejects the West and secular democracy and seeks to implement its “pure” version of Shariah law. But overcoming the Boko Haram challenge will take more than a military response – it also requires an approach that addresses Nigeria’s tolerance of long-running sectarian violence, protects religious freedom and enforces rule of law.

For the past two years, Boko Haram has been the primary perpetrator of religious-related violence and gross religious freedom violations in Nigeria. In August of this year, the U.S. Commission on International Religious Freedom (USCIRF), which I chair, issued a report highlighting the recent toll of Boko Haram’s targeted assaults on religious institutions and leaders.  The numbers are troubling.

More from CNN: Nigeria must win battle for youth

Yet even setting aside Boko Haram, Nigeria’s long-term stability is threatened by sectarian violence between Muslims and Christians, bloodshed that has claimed the lives of 14,000 people since 1999.

Worse, since that time, USCIRF has confirmed that only 200 people have been found guilty of perpetrating these attacks.  This failure to bring the guilty to justice has created a climate of impunity emboldening the violent to commit further attacks, and indeed has helped trigger the rise of Boko Haram itself.  Boko Haram uses this history as a recruiting tool and the group frequently attacks predominantly Christian areas in Bauchi, Jos, Kaduna, and Kano to further exacerbate existing Muslim-Christian tensions and fuel more violence.

What can be done to stem the religiously-motivated violence that threatens to destabilize Nigeria?

In response to the violence, particularly that of Boko Haram, the government has used counterterrorism tactics involving its security services.  This strategy, while necessary, is insufficient. It cannot only be about the force of arms. Nigeria must also enforce the rule of law and make perpetrators of both sectarian and Boko Haram violence accountable through the judicial system. Indeed, President Obama was correct in making the case to Nigerian President Goodluck Jonathan during their September 23 meeting in New York that the Nigerian government must embrace a comprehensive approach that includes the protection of human rights and the promotion of rule of law.

And what can other countries do to press Nigeria’s government to take appropriate action and protect religious freedom?

Since 2009, our commission has repeatedly recommended that the United States name Nigeria a “country of particular concern,” or CPC, for tolerating systematic, ongoing, and egregious religious freedom violations.

In addition, as stated in our 2013 annual report, we recommend that the U.S. government enter into a binding agreement with the Nigerian government to assist it in holding perpetrators of the violence accountable, developing conflict prevention and early warning mechanisms, and professionalizing the police force to combat sectarian violence.

In our view, Nigeria’s government has the capacity to address the violence successfully.  The problem appears to be one of will, not ability. Clearly, Nigeria’s establishment, including President Jonathan and other leaders, needs to muster the political courage to protect the innocent and prosecute those who are guilty of unleashing violence against their fellow Nigerians.

Simply stated, Nigeria’s failure since at least the turn of the century to protect Nigerians from religious-related assaults – or prevent or punish such violence – must be addressed.  Every effort must be made to bring perpetrators of this violence, regardless of their faith or position in society, to justice.  It is the only way the country will have any chance of a stable future.

Topics: Africa • Nigeria
Next entry »Republicans say they respect the Constitution. Really?
« Previous entryHow to solve the crisis in Washington

Next entry »Republicans say they respect the Constitution. Really?
« Previous entryHow to solve the crisis in Washington