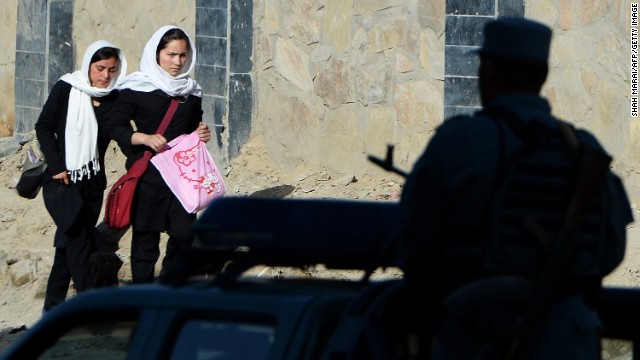 By Ellen Laipson, Special to CNN

Editor’s note: Ellen Laipson is president and CEO of the Stimson Center, a nonprofit and nonpartisan international security think tank. The views expressed are the writer’s own.

In the beautifully restored third century B.C. citadel of the ancient western Afghan city of Herat, scholars and diplomats from Afghanistan's neighbors and international partners spent the first weekend in October at a security conference exploring prospects for the country to emerge as a stable and independent state after NATO military forces leave in 2014.

The conference, which I attended along with more than 130 other participants representing 30 countries and organizations, was filled with more questions than answers about what awaits Afghanistan.

Who will be chosen to be the nation’s new leader in the April 5 election to replace President Hamid Karzai? Will the elections meet international standards? Will the Taliban be integrated as a legitimate political force or remain spoilers or worse in Afghanistan’s political future? Will Afghanistan maintain the new freedoms for the media and in the status of women or slip backward once international attention is reduced?

Afghans are engaged in passionate debate about the identity issues that will determine whether their nation will stay on a modernizing course. New legislation to ban violence against women has triggered a backlash among Islamic experts and traditionalists. Newly empowered women are anguishing about the possible loss of their recent gains.

More from GPS: A unified nation at stake?

A conference speaker who said the Taliban era of the late 1990s brought law and order at home and regional peace provoked intense discussion about the terrible abuses of those years. There is free-floating anxiety about the Taliban's enduring capacity to intimidate and undermine the new politics of the country.

But the main focus of the two-day conference was the rebalancing of Afghanistan’s relations in its region. Dubbed by the Turks as the "heart of Asia," Afghanistan actually bridges multiple regions: the Persian Gulf, Central Asia and South Asia. Afghanistan’s goal is to optimize its location as a transit route, trading partner and developing economy without being subservient to any outside powers.

The transition is occurring from a Western-managed process to one where the rising middle powers of the region are increasingly influential in supporting Afghanistan's search for stability. The United States and other Western partners have endorsed the slogan of "Afghan owned, Afghan led" as 2014 approaches. Even as those Western donors make pledges to remain engaged, the shift to more regional influence is clear.

More from CNN: Surprising hope for Afghanistan and Pakistan

Afghans now lead security operations at home, with the remaining forces from the international community responding when asked. Large official international forums on Afghanistan's future – hosted variously by Germany, Turkey and others – are now co-hosted by Afghanistan. Buoyed by a decade of infusions of aid, security reform and civil society human capital building, Afghans are ready to set their own agenda.

Most Afghans proudly insist they are ready to fly solo, but some quietly concede that they worry deeply that the departure of Western trainers and security partners could be too abrupt.

Karzai has not moved quickly to finalize a bilateral security agreement with Washington, which could allow a residual U.S. military presence beyond 2014. Indeed, he may wait for his successor to decide, complicating U.S. planning and the costs of the American withdrawal.

Meanwhile, Afghanistan’s two most important neighbors – Pakistan and Iran – treat Afghanistan as a troublesome inferior that is the source of problems such as refugees, drugs and violent extremism. This is not entirely fair, since both adjacent states have done their part to sow turmoil and violence in Afghanistan's ethnically and politically divided society.

As they seek to maintain their influence over Afghan parties and policies, Pakistan and Iran are not ready for the new confidence and assertiveness of the Afghans.

Iran may be Karzai's silent partner in delaying the security agreement with the United States, because Tehran sees a U.S. military presence on its border as a top national security concern. But an Iran scholar and I generally agreed that the new opening in U.S.-Iran relations – mainly over the nuclear issue – could create an improved environment for cooperation between the two nations in Afghanistan over border security, counternarcotics and counterterrorism.

Afghanistan’s other cross-border relationships – with Central Asia and China – are less fraught with friction. Terrorism tops the agenda, and these states are eager to cooperate with the government in Kabul to track extremists and protect their own borders.

Central Asian nations and China are not optimistic about Afghanistan's chances of overcoming Islamic extremism. Turkey and India, on the other hand, have a more positive and hopeful view of Afghanistan’s prospects. They see transportation infrastructure and communications connectivity as powerful drivers for Afghanistan's economic success and its integration in the regions it bridges.

Afghanistan as a sovereign, legitimate, capable state is a work in progress – more goal than reality today. Many risks and dangers from within loom as the uncertainties of 2014 approach. But young Afghans have been boosted by the decade of Western engagement. And many show promise of being able to lead the country's civil society if political efforts to modernize the state and society manage to stay on track.

Topics: Afghanistan
Next entry »Zakaria: No place for hostage taking in democracy
« Previous entryZakaria: Authority has collapsed within GOP

Next entry »Zakaria: No place for hostage taking in democracy
« Previous entryZakaria: Authority has collapsed within GOP