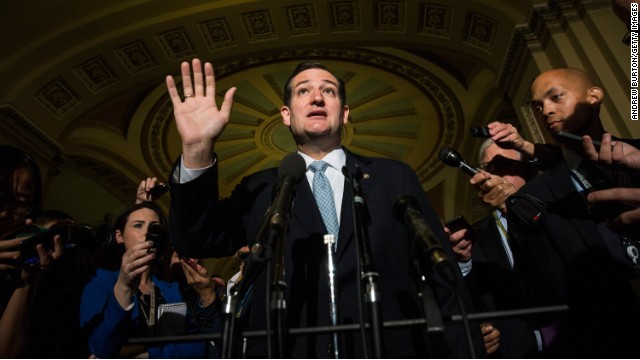 Zakaria: Rhetoric a problem for GOP

CNN speaks with Fareed about the shutdown in Washington and why the Republican Party is struggling to maintain unity.

You wrote in the Washington Post this week: “Over the past six decades, conservatism's language of decay, despair and decline have created a powerful group of Americans who believe fervently in this dark narrative and are determined to stop the country from plunging into imminent oblivion."

"At some point, will they come to recognize that you cannot love America in theory and hate it in fact." You also want conservatives to lighten up, Fareed. Explain what's going on here.

Well, I think there are two things going on. One is the kind of institutional collapse of authority in the Republican Party so that as you know, on immigration, the leadership of the party wanted to make a deal. Most senators, most of the leaders in the House, but they can't because there's no structure. This is not Newt Gingrich's Republican Party anymore.

The second piece is that there is this extreme wing within the party, the Tea Party, which really believes that America is going to hell in a hand basket – and tomorrow. You know, as Ted Cruz said at the Values Voter Summit, we've got two years to stop this country from plunging into oblivion. Well, if you use rhetoric like that, if you work people up like that, it's very tough to see how you could compromise.

More from GPS: Conservatism needs to lighten up

You're telling them that what they're doing now by refusing to raise the debt ceiling is noble and heroic and is saving the republic from imminent oblivion. How do you dial that back? You know, that second piece is really worrying because most of the Tea Party come out of this feeling, you know, this just means we have to fight harder the next time around.

After the government shutdown in early 1996, when Bill Clinton was president, the House speaker was Newt Gingrich, and they had a bitter fight – the shutdown lasted for more than 20 days. But after that, cooler heads prevailed. Obviously, Bill Clinton got re-elected and then they worked together, Newt Gingrich, Bill Clinton. Welfare reform was passed. All of a sudden, four years of budget surpluses, all of a sudden came into being. There was great cooperation on many levels. Do you anticipate that is possible between this president and the Republican leadership in Congress?

I think it's going to be very difficult, because two things have happened. One is this fact that the leader doesn't have…Gingrich was a very powerful speaker. He could deliver the whole party. You saw what happened in this vote that took place. I mean, Paul Ryan didn't vote for this deal that Boehner brought.

So, you have this strange internal dynamic within the Republican Party that probably has to sort itself out before it can really become what we're looking for – a party that thinks of itself as a governing party, that judges itself by the results it delivers, not the level of obstructionism it can produce.

Next entry »Has U.S. gone further than Netherlands over marijuana?
« Previous entryHow to undermine Al-Shabaab