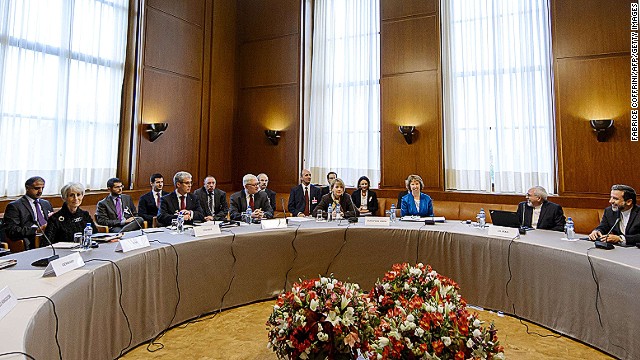 U.S. needs to get real over Iran nuclear talks

By Kelsey Davenport, Special to CNN

Editor’s note: Kelsey Davenport is the nonproliferation analyst for the Arms Control Association. The views expressed are her own.

For the first time in years, Washington appears to be on the path towards a deal that will guard against a nuclear-armed Iran. But to achieve that goal, America must speak with one voice. Our representatives in Washington must actively support our diplomats and actively avoid undercutting them at the negotiating table.

After two days of talks in Geneva, there is good reason to hope that Iran, the United States, and five other world powers are on the path to an agreement that will end the decades-long standoff over Iran’s nuclear program.

During the October 15 to 16 negotiations, Iranian officials followed through on newly-elected President Hassan Rouhani’s promise to engage in serious negotiations with the international community and present a proposal that addresses the concerns about Iran’s nuclear program. In a press conference following the talks, a joint statement endorsed by all the participating countries described Iran’s proposal as an “important contribution” and characterized the talks as “substantive and forward looking.”

In short, Iran is following through on Rouhani’s commitment to enter into serious negotiations and address international concerns over its nuclear intentions.

Indeed, in a strange twist, the main impediment to a nuclear deal may not be Iran, but hardliners in the U.S. Congress. It is now time for the United States to demonstrate to Iran that we are also willing and able to reach a “win-win” agreement. With Iran bringing a serious proposal to the table that will limit its nuclear program, pragmatic lawmakers must resist the hawks’ calls for additional sanctions, allowing time for negotiations to proceed, and instead focus on the shape of a deal that will protect U.S. interests preventing  a nuclear-armed Iran.

Washington needs to be realistic about the scope of a deal. Those calling for Iran to dismantle its nuclear program and forgo all uranium enrichment activities are either naïve or disingenuous. While that may be the perfect solution from a nonproliferation standpoint, it is a hardly a compromise that Iranian negotiators would be able to sell back in Tehran.

Insisting on zero enrichment is not an effective solution to stopping Iran's dangerous nuclear pursuits. But it is a ploy for those who prefer bombing Iran to talking to Tehran. Failure to allow time for diplomacy to work, and following an alternative course of further sanctions and possibly military strikes, only risks pushing Tehran to openly pursuing nuclear weapons.

This does not, of course, mean that the United States should accept a bad deal. Iran should be restricted to only producing uranium enriched to civilian power reactor grade, and the amount produced should be tied to its civilian power needs. Tehran must also allow international inspectors more extensive access to its nuclear facilities, visits on short notice, and must provide more-timely information about future nuclear facilities.

Including these measures in a deal would ensure that Iran could not dash to build nuclear weapons before the international community would detect such activities and be able to block them.

Iranian concessions must also be followed by reciprocal measures to relieve the sanctions imposed by the United States and the international community. As Iran addresses the most sensitive proliferation concerns, Washington should begin waiving restrictions that have devastated Iran’s economy. Failure to roll back these sanctions in a timely manner could send the wrong signal to the Iranians about the seriousness of U.S. efforts to reach a deal.

Negotiations are scheduled to resume in Geneva on November 7.  Let’s not spoil this real opportunity with unrealistic demands.