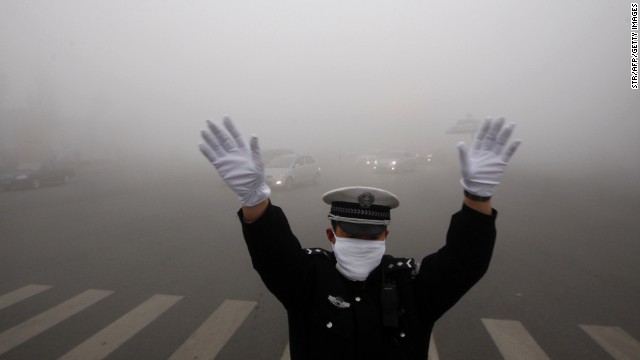 Chinese unease growing at flip side of progress

Editor’s note: Richard Wike is Director of Global Attitudes at the Pew Research Center. You can follow him on Twitter @RichardWike. The views expressed are his own.

After a remarkable run of economic expansion that has lifted tens of millions out of poverty, the Chinese public is waking up to the side effects of progress. True, much of the growing middle class is pleased to have achieved some degree of material comfort. But that same middle class is increasingly asking tough questions about the costs of economic growth and the fairness of the system that produced it. And the record setting levels of pollution this week in the northeastern city of Harbin, where schools and the airport have been shut, will only intensify scrutiny of President Xi Jinping’s government in the run up to next month’s meeting of the Chinese Communist Party Central Committee.

Harbin, a city of 11 million people, was essentially closed Monday and Tuesday as thick smog raised concentrations of PM2.5, the most dangerous airborne particles for health, to more than 30 times the level considered safe by the World Health Organization. Air pollution tends to be worse in the winter, and many now fear a repeat of last January’s “airpocalypse,” which brought impenetrable smog and record breaking toxicity levels to Beijing and other major cities.

And air pollution wasn’t the only thing on Chinese minds this year – water pollution generated some grisly headlines throughout the country – and around the world – as thousands of pig carcasses floated down the Huangpu River, through the center of Shanghai, threatening the city’s water supply. Factor in the fact that China has had more than its share of highly publicized food safety issues, including Chinese food producers implicated in scandals involving poisonous infant formula, toxic rice and rat meat disguised as mutton, and it is easy to see why public concern is growing.

These fears are underscored by polling at the Pew Research Center, which has found increasing concern in China over a range of issues related to environmental protection, consumer safety, and public health. Today, according to a recently released survey, 83 percent describe air pollution as a big problem, while 47 percent say it is a very big problem, up from 36 percent last year and 31 percent in 2008. Four-in-ten Chinese call water pollution a very big problem, compared with about a quarter five years ago.

More from GPS: The new face of protest

Concerns about public health and consumer issues have risen even more sharply. The latest numbers suggest that 38 percent believe food safety is a very big problem, up from just 12 percent in 2008. Worries about the safety of medicines and the quality of manufactured goods, meanwhile, have also increased significantly. These issues are especially important to young people, urban residents, and those with higher incomes – exactly the demographic groups that have benefited the most from the country’s long run of economic growth.

Of course, compared with many other nations around the world, China’s public mood is relatively upbeat. The Chinese tend to be more satisfied with national conditions, happier with their economy, and more optimistic about the future. For example, more than eight in ten believe that when Chinese children grow up, they will be better off financially than their parents, the highest percentage among the 39 countries included in the 2013 Pew Research survey.

Still, even China’s impressive economic record elicits some complaints. Rising prices worry most Chinese, with 59 percent saying they are a very big problem, the highest percentage among the 17 issues tested on the poll. Moreover, there’s a clear sense that the benefits from decades of growth are not being equitably shared. About half say the gap between rich and poor is a very big problem, and in a 2012 survey, 81 percent agreed with the statement “Today, it’s really true that the rich just get richer while the poor get poorer.”

As the Communist Party meets for its plenary session, officials might also be concerned that there is a widespread perception that political elites, in particular, are enjoying more than their fair share of the economic spoils. Corrupt officials are considered a very big problem by a little more than half of Chinese, an increase of 14 percentage points since 2008. It’s too soon to tell how the high profile conviction of former Chongqing party boss Bo Xilai will affect attitudes toward corruption, but the trial’s sensational details about the high living of Bo and his family fit neatly with public suspicions about the ways power can be leveraged into financial gain.

As concerns rise about issues like pollution, health, inequality, and corruption, it’s clear that many Chinese are wrestling with the downsides of growth and rapid modernization. Of course, it is unlikely that public anger over issues like dirty air and water will pose a serious threat to the Communist Party anytime soon, but these are the types of issues that can generate grassroots mobilization that eventually make life uncomfortable for a country’s leaders. As the Economist recently put it, China now has “a middle class that has discovered nimbyism,” and more importantly, the Chinese government “fears that environmental activism could become the foundation for more general political opposition.”

It is perhaps with all this in mind that the Communist Party is reportedly showing growing interest in understanding public opinion, conducting polls and establishing “opinion monitoring centers” in media organizations and universities to scrutinize the country’s exploding volume of online chatter. What they will likely hear when they tune in to public debates will be a rising chorus of complaints about a new set of issues that were not on their radar screens a few years ago. Back then, unprecedented economic growth seemed like it was enough to keep the public satisfied and the protestors off the streets. The future is less clear.