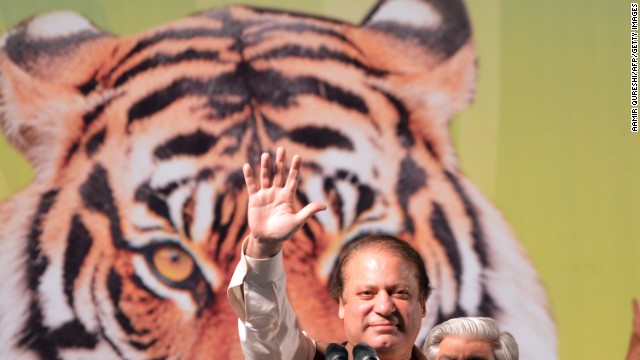 By Khurram Husain, Special to CNN

Editor’s note: Khurram Husain is the Pakistan scholar at the Woodrow Wilson International Center for Scholars. The views expressed are his own.

As Pakistani Prime Minister Nawaz Sharif prepares to sit down with President Barack Obama on Wednesday, he might want to look to history for guidance.

Almost a quarter century ago, newly elected Prime Minister Benazir Bhutto visited Washington DC, where she was received like a celebrity. There was an address to a joint sitting of Congress, a commencement address at Harvard University and a dinner at the White House in her honor. In her address to Congress, Bhutto repeatedly emphasized her democratic credentials, and tapped into the triumphalist mood sweeping Western capitals as the disintegration of the Soviet Union gathered pace. She also underlined the common purpose between her country and her hosts as the war in Afghanistan drew to a close, describing both countries as “friends and partners, who have fought, side by side, in the cause of liberty.”

“We are now moral as well as political partners,” she said. “Two elected governments bonded together in a common respect for constitutional government, accountability, and a commitment to freedom.”

These words might have made some of her hosts a little uncomfortable.  After all, here was a woman in her 30s who had already endured imprisonment and exile at the hands of a dictator embraced as a friend by the United States, one lavished with U.S. economic and military assistance.

It was an extraordinary moment, but it wasn't to last – Bhutto’s government was dismissed a year later. The dictator was gone, but the apparatus of dictatorship remained.

Today, as then, a Pakistani prime minister is visiting the United States as a war unwinds in Afghanistan and dictatorships are toppled, this time in the Middle East. And once again, a Pakistani leader is able to invoke the democratic aspirations of the country’s people. But instead of the soaring rhetoric, the words now are more mundane, the excitement of 24 years ago replaced by platitudes.

More from GPS: Time to face down extremists

Take Sharif’s address to a small gathering at the U.S .Chamber of Commerce this week, when he stated simply that Pakistan wants good relations with the United States “that can benefit the peoples of both countries.”

“I am the only politician left in Pakistan who has held high office three times,” he told his audience. “I remember the mistakes that were made along the way.”

On the surface, such an approach hardly seems to do justice to the importance of this juncture in the two nations’ history, as the United States withdraws from Afghanistan but continues deeply unpopular drone strikes in Pakistan. Pakistan, meanwhile, faces a continued threat from domestic extremists, a point underscored just this week with the bombing of a passenger train.

Yet it is exactly because of these unresolved issues that a pragmatic rather than “inspirational” tone is the right one to strike.

Sharif's last visit to the White House, hurriedly arranged for July 4, 1999, took place against the backdrop of the Kargil War with India, when a small cabal of generals from Pakistan’s army brought the subcontinent to the brink of nuclear war. Sharif was able to end that war, sounding the call to retreat from the White House lawn. But he paid for the decision with his premiership upon his return. Another decade of dictatorship followed for Pakistan, and another expedient partnership with the superpower.

Fast forward to today, and Pakistan’s army appears to have lost its appetite to rule, meaning that if Sharif treads carefully he stands a fighting chance of realizing some of the hopes espoused by Bhutto.

But success in charting a pragmatic course will need support from the international community, support that must be about more than just offering economic aid. It’s worth remembering that in the last quarter century, Pakistan has signed onto eight IMF programs and yet has still watched its tax to GDP ratio dwindle from 14 percent of GDP in the 1980s to less than 9 percent now.

Of course, Pakistan’s fragile economy requires economic assistance to prevent it careering toward disaster. However, assistance must not be allowed to become a crutch, and Sharif should be urged to continue searching for a way to wean Pakistan off its addiction to foreign assistance.

All this said, the real reforms that Pakistan needs to undertake are essentially structural – the public sector enterprises that are bleeding the government’s treasury, the power sector that has become unresponsive to all stimuli, whether price inducements through tariff hikes or the discipline of private sector management, a tax machinery that loses almost a quarter of the revenue it collects.

Democracy is now taking root in Pakistan. But it will be pragmatism, not grand rhetoric and gestures, which will offer the country what it needs to flourish.

Next entry »What I'm reading: Governing without a clear mandate
« Previous entryChinese unease growing at flip side of progress