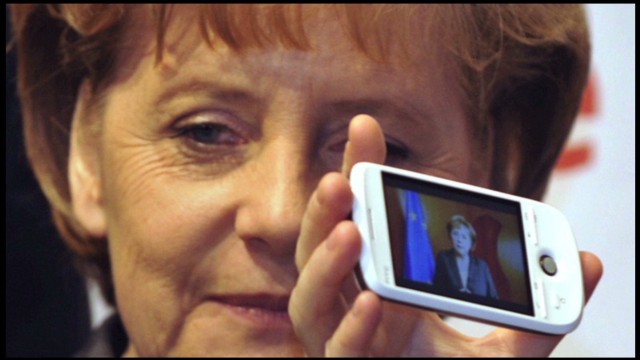 CNN speaks with Christian Whiton, former senior advisor at the U.S. State Department and author of Smart Power: Between Diplomacy and War, about the allegations that the U.S. has been eavesdropping on German Chancellor Angela Merkel’s phone calls. This is an edited version of the transcript.

I guess everyone spies, but it used to be done in secret. So is the only surprise just how far up the U.S. surveillance program actually goes?

Well, it shouldn’t be that surprising, especially if they are putting wireless signals out there. Because that is the allegation – that it was Angela Merkel’s cell phone. So of course it isn’t just the United States, but also probably the Chinese, the Russians, others, who sweep up electronic intelligence. The point is that you are not really supposed to get caught. And if you do get caught, and it is raised to a senior level, then it’s natural that they are going to protest, which of course is what Germany is doing. It’s what the United States would do if we found out that someone was listening to President Obama’s cell phone.

So is this really a crisis of trust between allies, or is this being done because now that it’s out in public, Germany, France, Mexico, Brazil – they have to say something, they have to protest for domestic consumption. It’s kind of done with a bit of a wink and a nod?

I think especially with Germany and France, of course, they are very familiar with U.S. signals intelligence, which is the technical term for eavesdropping…We use a lot of signals intelligence, we share it with our allies. And they spy on us too. France is one of the most aggressive collectors of intelligence. So what you are seeing is a bit of kabuki theater that will probably blow over before too long.

Is it made a little bit worse because Angela Merkel, the German chancellor, stood on stage with President Barack Obama just a few months ago when this all first blew up, saying that the crisis had been solved, this issue was being put to bed. And now it has come out the claim that the U.S. is actually tapping into her phone.

I do think there is a cumulative effect of sloppiness here because of course this comes not far on the heels of the broader intelligence scandal of WikiLeaks. And so when people cooperate with the United States on intelligence, or sort of look the other way presuming we might be collecting information but not knowing exactly how far it goes, that’s one thing. But when it becomes aired in public, and when 200,000 cables are posted by WikiLeaks – confidential information, confidential conversations – all of this has I think undermined our allies confidence in our ability to keep secrets.

The fact that a young private in the case of WikiLeaks was able to access that much classified information means there is a decline in confidence. I just don’t think it is permanent because all these countries realize the importance of listening to bad actors’ conversations. They are probably just a little upset that we have been listening to so many allies’ conversations.

A lot of this kind of information seems to be coming from the former NSA contractor Edward Snowden. Is there anything the United States can do, or are they just going to have to wait until there is nothing left to leak?

The U.S. can’t really act against Snowden now. Backing Russia into a corner was never a wise strategy. Calling Vladimir Putin out – it’s not like he’s going to back down before his own public. It would have been much better, frankly, to let him pass into one of the Central American countries he had in mind, and then it could have been a very different conversation that Washington had with them in order to get him back to put him on trial for the crimes for which he is charged.

So it’s amazing to me as someone who did see intelligence at some very high levels, that a contractor – not even a full-time employee of the NSA – was allegedly able to get access to as much information. So the steady drip is damaging, and it is has gone on much longer than many people had feared.