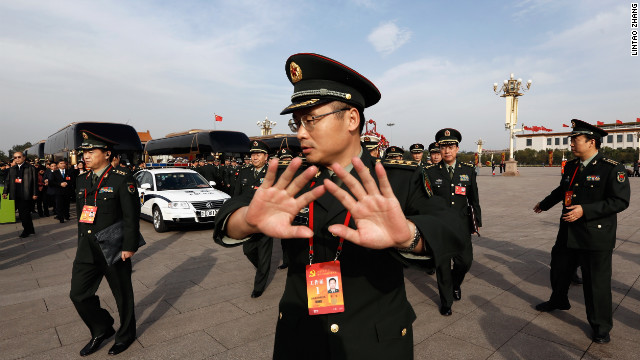 How Chinese censorship is reaching overseas

By Sarah Cook, Special to CNN

Editor’s note: Sarah Cook is a senior research analyst for East Asia at Freedom House and author of report The Long Shadow of Chinese Censorship, which was released October 22 by the National Endowment for Democracy’s Center for International Media Assistance. The views expressed are her own.

The efforts of China’s leaders to prevent its citizens from circulating information inconvenient to the ruling Communist Party are well known. But while censorship is a daily reality for media outlets inside mainland China, their counterparts abroad are increasingly finding themselves under pressure as well.

China’s leaders, it seems, have become more ambitious in their attempts to control the news.

Take last year, when reports surfaced that China’s ambassador to the United States met with Bloomberg’s editor-in-chief to try to persuade the outlet not to run a story about the finances of Communist Party leader Xi Jinping’s family. Last May, meanwhile, popular Taiwanese talk show host Cheng Hung-yi resigned after station executives allegedly tried to stop his program from touching on topics sensitive to Beijing. And back in 2011, reportedly at Beijing’s urging, a court in Hanoi sentenced two Vietnamese citizens who practice Falun Gong to prison for transmitting radio broadcasts about human rights abuses and corruption from their farm to listeners in China.

These are far from the only examples of how the Chinese Communist Party’s media controls extend past China’s borders, in a push documented in a report published last week by the Center for International Media Assistance, which examines a range of media outlets based outside China, from major international media to local outlets in Asia, Africa, and Latin America and elsewhere. And the findings are clear: the “China Factor” looms over newsrooms across the globe.

As the report notes, the pressure has sometimes been overt, with Chinese officials impeding independent reporting by barring foreign correspondents from the sites of significant incidents, pressuring senior executives not to publish content, or simply refusing to issue visas.

But more common – and arguably more effective – has been the carrot and stick approach that induces subtle self-censorship among media owners and outlets. Those perceived as friendly to Beijing might, for example, be rewarded with advertising, access to Chinese audiences, lucrative contracts for non-media enterprises, and even political appointments. Those deemed too critical can face not just visa restrictions for reporters, but lost advertising and blocked websites. As a result, some outlets have become increasingly wary over covering “hot button” issues such as the persecution of Tibetans, Uighurs and Falun Gong practitioners.

Indirect pressure can also be applied via proxies, including advertisers, satellite firms, and foreign governments, with out-of-favor outlets likely to be boycotted or have their transmission signals cut.

Thus, it has not only been media organizations themselves that have moved to restrict access to information. Earlier this month, CNN reported that Apple had been accused of “kowtowing to the Chinese government” after “pulling from its China App Store a product enabling users to circumvent firewalls and access restricted sites.” This wasn’t the first time since 2011 that Apple had removed apps that people in China used to access independent overseas Chinese media or bookstores.

A more extreme example of how Western businesses can get caught in the middle of transnational Chinese censorship occurred in 2007. Last year, a WikiLeaks cable suggested that Chinese security officials had summoned and interrogated NASDAQ’s chief representative in China, U.S. citizen Lawrence Pan.

According to the cable, the questioning focused on a journalist who had been reporting from the exchange’s New York headquarters for New Tang Dynasty Television (NTDTV), an outlet founded by Falun Gong practitioners in the United States to broadcast news and cultural programming to Chinese audiences. The cable added that Pan, “to secure his release, may have pledged to Chinese authorities that NASDAQ would no longer allow” such access. Indeed, starting in February 2007, NTDTV’s correspondent was suddenly barred from the building after reporting from there on a daily basis for more than a year.

Some international companies have been more proactive in their assistance to Chinese censors. In 2008, Reporters Without Borders released the transcript of a telephone recording in which a representative of the French satellite company Eutelsat admitted that the firm had cut the signal of that same television station to “show a good gesture to the Chinese government.”

While some of these dynamics date back to the 1990s, they have intensified and expanded over the past five years. Physical assaults against foreign reporters in China have become more violent, while Beijing’s efforts to influence newsroom decisions in Hong Kong have intensified, expanding to topics touching on the territory’s internal politics. In Taiwan, meanwhile, self-censorship is increasing, as media owners seek new sources of revenue from mainland entities. And major Western news outlets have found themselves facing the kinds of restrictions – including wholesale website blocking and intrusive cyber-attacks – usually reserved for dissident Chinese websites.

The paradoxical combination of the Communist Party feeling emboldened internationally and insecure domestically has only fueled this trend. With more than half of China’s population now accessing the Internet, and with some political content going viral despite domestic censors’ efforts, the Party’s nervousness of overseas news trickling in has increased.

These dynamics have a damaging real-world impact. For international audiences, the information targeted for censorship includes topics that have global implications, such as human rights abuses, high-level corruption, and environmental pollution. For Chinese, the stakes are even higher. Overseas media outlets offer a vital source of information on matters with life-or-death consequences and a precious forum for debating the past, present, and future of their country.

Still, there are clear limits to Beijing’s reach. Media outlets around the world daily put out news that the Communist Party would likely prefer unreported, while journalists, activists, owners, and independent courts have pushed back against pressure and scored some important victories. The result is a complex and ever-changing negotiation over where the “red line” lies.

As China's international role expands, this transnational tug-of-war will become more important. Supporters of media freedom – be they journalists, policymakers, or news consumers – must therefore develop an open-eyed strategy for protecting and expanding the free flow of information about one of the world’s most prominent nations.

Next entry »Zakaria: We shouldn't be spying on ally leaders
« Previous entryGladwell: Why we've got David and Goliath wrong