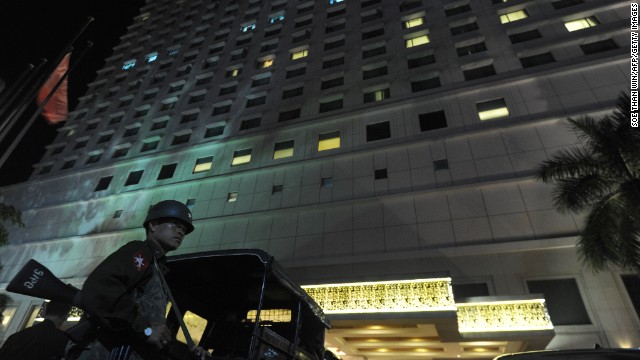 By Jonah Blank, Special to CNN

Editor’s note: Jonah Blank is a senior political scientist at the nonprofit, nonpartisan RAND Corporation. He is author of the books Arrow of the Blue-Skinned God and Mullahs on the Mainframe. The views expressed are his own.

The explosion in downtown Yangon blew out a window overlooking the iconic Sule Pagoda, injuring an American tourist and littering the busy street with shards of glass. The attack, on the Traders’ Hotel in the heart of Myanmar’s commercial center, was one of at least nine bombings to rack the nation in a single week earlier this month, leaving three dead, 10 wounded and many thousands of others worried about what the future may hold. But who is behind the attacks? And should Myanmar brace itself for a period of violent chaos?

Throughout the period of military rule in Myanmar (also called Burma), small-scale explosions were a standard tactic among several of the nation’s long-running insurgencies.  Since President Thein Sein started a program of reform and reconciliation in 2011, however, such attacks had essentially ceased. After a half-century of hermetic authoritarianism, Myanmar’s re-entry into the world community has been one of the biggest (and most optimistic) stories in Asia. Yet an upswing in ethnic and religious conflict could put Myanmar’s progress at risk.

On October 18, government authorities blamed rogue elements of the Karen National Union for the attacks, but the Karen rebels deny involvement and no other group has claimed credit. It is not even certain that all of the attacks had the same source.  The list of possible culprits is long.

Myanmar has seen dozens of revolts and uprisings since gaining its independence from Britain in 1948, most of them led by various ethnic minority groups living in the country’s vast mountainous uplands.  Several of the recent explosions occurred in sites with enduring ethnic unrest: one blast rocked Namkham (in a remote corner of Shan state), while the deadliest one hit Tuangoo (a town near the new capital of Naypyidaw, with a large Karen population).  Police arrested three suspects in the Traders attack in the southeastern Mon state.

If the recent bombings are indeed tied to the Karen movement or another ethnic insurgency, they would follow a longstanding pattern.

Some observers see the bombings instead as a continuation of the most troubling recent trend in Myanmar: violent confrontations between Buddhists and Muslims. Last year, communal riots in Rakhine State killed hundreds and displaced hundreds of thousands; most of the victims were Muslim.  Violence spread to various cities in central Myanmar, often fueled by radical Buddhist monks such as U Wirathu, who blamed Islamic extremists for a July bombing. One of this month’s blasts targeted a Buddhist pagoda in Sagaing. There is no evidence of a foreign connection – either in the recent bombings or earlier attacks – but many Burmese Buddhists attribute the rise in religious violence to global terrorist groups.

Others point a finger at the military itself. U Aung Moe Zaw, a former dissident and current member of the Democratic Party for a New Society, seemed to imply as much in the wake of the Traders’ Hotel attack. After half a century of enjoying the perks of power, not all members of the country’s military are pleased with the reforms of Thein Sein (himself a former general).  A failure of social order could provide an excuse for such disgruntled officers to attempt to retake the reins of governance.

Whoever is behind the recent spate of attacks, ethnic and religious violence represents the greatest threat to Myanmar’s political, social and economic progress.  Almost exactly a year ago, Barack Obama became the first sitting U.S. president ever to visit Myanmar – testimony to the significance of this nation for American strategy in Asia and the wider world. Myanmar’s transition from insular military dictatorship to an internationally engaged democracy will not always be smooth.  The country’s leaders – and its well-wishers in the United States and throughout the world – must work hard to insure that all of Myanmar’s ethnic and religious communities benefit from the encouraging developments now underway.

Topics: Myanmar
Next entry »And the best city in the world for food is...?
« Previous entryHow a Norwegian town will make the sun shine

Next entry »And the best city in the world for food is...?
« Previous entryHow a Norwegian town will make the sun shine