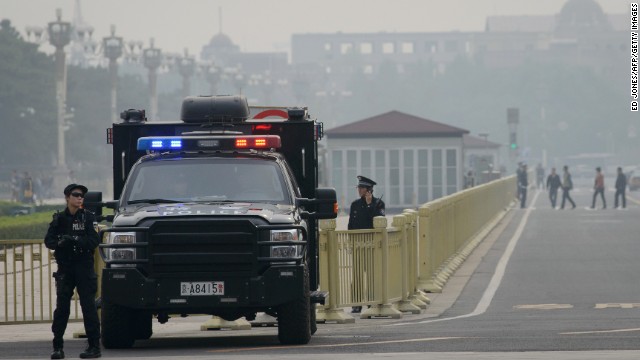 Why China should be open about Tiananmen attack

By Robert Daly, Special to CNN

Editor's note: Robert Daly is director of the Kissinger Institute on China and the United States at the Woodrow Wilson Center. The views expressed are his own.

At noon on October 28, an SUV exploded in front of Beijing's Gate of Heavenly Peace, or Tiananmen. Five people were killed and forty injured. The symbolic nature of the site, as well as the timing of the violence – China's Communist Party is about meet to set the country's direction for the next decade – make the explosion more important than a bombing would be in another Chinese city in a less sensitive season. The bus bomb that killed 16 in Wuhan in February, 1998, for example, did not get as much attention.

Not that Monday's tragedy has been widely covered in China. The site of the fire was barricaded and cleaned within hours. Chinese censors were just as thorough in scouring China's Internet for mention of what should have been the day's major story.

We will probably never know the intentions of the people in the SUV, but it appears that that this was either a murderously clumsy self-immolation or a terrorist attack. Beijing has declared that it was terrorism and has five suspects in custody who have confessed to planning it.

That this was terrorism is plausible, but it will not be credible unless Beijing provides evidence and tries any suspects tied to the attack in a transparent manner. That is unlikely – Beijing has already drawn its customary veil of silence around the incident. This penchant for secrecy makes it difficult for the U.S. and other countries to extend to China's leaders and the Chinese people the sympathy they wish for and may deserve. Instead, we answer their silence with our own.

The United States received condolences from world leaders when it was attacked in Boston, New York, and Oklahoma City. The innocents killed on Monday deserve the same attention. The area of the blast is packed at midday with thousands of Chinese tourists, many of whom have come from China's poor interior with their one child for the only trip they will ever make to the capital. For many Americans, Tiananmen is the site of the 1989 student movement and the Tank Man, but for Chinese tourists, it is a place to fly kites, slurp popsicles, and look at the gate they've seen only on television and on the backs of their coins. We should mourn them and, if their murders were planned, we should condemn their killers.

More from GPS: How Chinese censorship is reaching overseas

But we need proof. (The Chinese people need it more urgently, of course, in order to grieve properly, protect themselves from further violence, and understand their own country, but that is a different issue). We need proof to respond decently to the suffering of the victims and because China and the United States have pledged to help each other in worldwide efforts fight terror. We also need proof because we know that the 10 million Uyghurs of China's Xinjiang Autonomous Region are treated badly in their homeland and are often the first to be suspected of criminal activity in wealthy eastern cities, where they are an easily identified minority. Several Han scholars are leading the way in documenting prejudice against Uyghurs and are calling for new policies that afford them greater opportunity and respect. As an oppressed minority seeking freedom in their homeland, Uyghurs naturally elicit American sympathy.

On the other hand – the only hand, according to propaganda ministries in Beijing – there is a low-level, violent Uighur insurgency in Xinjiang. Han Chinese and Uyghurs have been killing each other in the region for years. Scores have died in tit-for-tat attacks this year, most of them reportedly Uyghurs, and over two hundred were killed on both sides in 2009. The United States has designated the East Turkestan Islamist Movement, a Uighur group, as a terrorist organization. Uyghurs were captured by American troops in Afghanistan after 9/11 and 22 were held at Guantanamo.

Beijing describes nearly all violence in Xinjiang as terrorism orchestrated outside of China by "splittists" who don't share in most Uyghurs' natural love of the motherland. Beijing's insistence that the Uyghurs have no legitimate grievances makes it hard for the U.S. to rush to China's side during the current tragedy.

Like many issues in the U.S.-China relationship, this is a multi-faceted failure on both sides. Chinese and American responses to the Beijing bombing underscore the cultural and political differences that make the United States and China wary of each other even as they pledge to build a new type of great power relationship. If that clumsy phrase is to mean anything, it should mean that we know how to speak to each other respectfully, truthfully, and effectively, even when we disagree.

It looks like that won't happen this time around. China is torn between sweeping the incident under the rug and cracking down ever more harshly on its Uighur population. The result is that, in the United States, this has become yet another story about the goonishness of the Chinese government rather than a story about human beings killed on Tiananmen. In China, our failure to take China's side will feed the established narrative of American self-regard and hypocrisy.

We could use a new type of relationship.