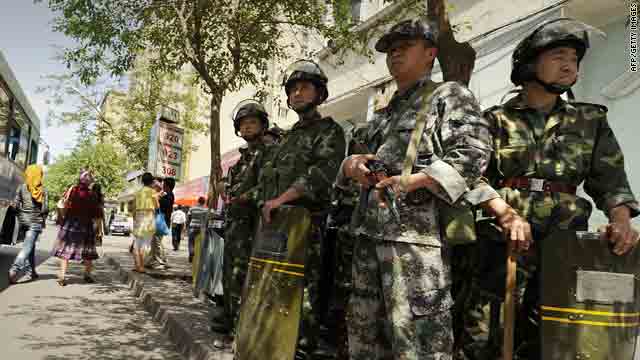 By Elizabeth Economy, Special to CNN

Editor’s note: Elizabeth Economy is C.V. Starr Senior Fellow and director of Asia Studies at the Council on Foreign Relations. The views expressed are her own.

In the aftermath of an apparent suicide attack in Beijing’s Tiananmen Square on October 27 that injured dozens of people and killed five (including three involved in the attack), Chinese authorities moved quickly to label the incident terrorism and to arrest a handful of suspects who reportedly helped plot the attack. In the process, word leaked out that those involved were from Xinjiang, a Muslim-dominated region in the far northwest of China. For decades, Xinjiang, itself, has been the site of often-violent ethnic strife between the Muslim Uyghur majority and the Han Chinese minority. Uyghur discontent, however, has rarely spilled over into other parts of China. Now, Chinese authorities are claiming that Uyghur extremists have, for the first time, taken their cause to Beijing.

Assuming this suicide attack was, in fact, a premeditated terrorist attack and not simply an act of individual desperation – an assumption many in and outside China continue to question – the government’s next step will likely be to crack down in Xinjiang itself. Past violence in Xinjiang has been met by Beijing with highly repressive policies, mass arrests, and demonstrations of military and police force. In fact, the Tiananmen incident occurred while Beijing was already in the midst of a government-directed crackdown on online activists in Xinjiang. Even more moderate approaches have fallen flat. In May, for example, residents of one county in Xinjiang were the beneficiaries of more than 100 government-sponsored lectures on ethnic relations during “ethnic harmony education month.” The following month, 35 people died in ethnic violence in that same county.

Beijing’s policies do little to address the real sources of its Xinjiang problem, which are economic, political, and cultural. Xinjiang’s per capita GDP is approximately one-third that of chart-topping Tianjin. Moreover, within that, Han Chinese benefit disproportionately. Chinese scholars Shan Wei and Chen Gang note that as the Han have migrated in, they have brought industries that undercut traditional Uyghur handicrafts industries and commerce. In addition, they suggest that Uyghurs are largely excluded from the personal networks the Han Chinese use to develop business.

More from GPS: Why China should be open about Tiananmen attack

The scale of Han Chinese migration into the region makes this problem particularly acute: over the past sixty years, the percentage of Han Chinese in Xinjiang has increased from more than 6 percent to more than 40 percent. Shan and Chen also argue that the Chinese Communist Party’s “anti-religion” ethos and “heavy handed restrictions on Islam” have “radicalized” many Muslim Uyghurs. There are, for example, stiff fines for taxi drivers who pick up women wearing a face-covering hijab; men with long beards are often subjected to hiring discrimination; and civil servants can be dismissed for attending Friday afternoon prayers. On the other side of the ethnic divide, the Han Chinese themselves complain that Uyghurs are advantaged by the ability to have more than one child and by preferential treatment in college admissions.

So what might Beijing do differently? It could ban discrimination based on religious practices, address income inequality through tax policy or job training, and promote the continued value of minority languages. Allowing Chinese citizens to worship freely would be an additional, far more radical step.

More profoundly, however, Beijing must find a way to address the issue raised by Chinese judge Shu Rui. In an opinion piece published in the Xinhua Daily Telegraph, Shu raises the case of the wheelchair-bound man who set off a homemade bomb in the Beijing International airport last July. Shu suggests that such violence reflects feelings of injustice and powerlessness and argues that Chinese society must “take seriously everyone’s discontent,” and ensure that the legal system promotes “justice and fairness.” This is no easy task in a country in which people’s rights are routinely violated: a recently released study states that 64 million Chinese families have had their land or homes expropriated by local governments in the name of development.

Beijing’s inability or unwillingness to address adequately the well-founded political and economic grievances of the Uyghurs does not minimize the actual terror threat that China might face from Uyghur separatists, such as the East Turkestan Islamic Movement, which took responsibility for the 2008 bus bombs in Shanghai and Yunnan. Some Xinjiang Muslims have joined al Qaeda, while others are reportedly fighting in Syria. The contacts and networks they develop could increase the actual threats Beijing faces if and when these radicalized fighters return to China.

However, such attacks have been few and far between. The more pressing challenge for Beijing is to weave a social contract with an increasingly disenfranchised Chinese people – Uyghurs among them – that respects and protects their interests and rights.

Topics: China • Terrorism
Next entry »What I'm reading: Are we creating informant society?
« Previous entryWhy upsetting Saudi Arabia may not be a bad thing

Next entry »What I'm reading: Are we creating informant society?
« Previous entryWhy upsetting Saudi Arabia may not be a bad thing