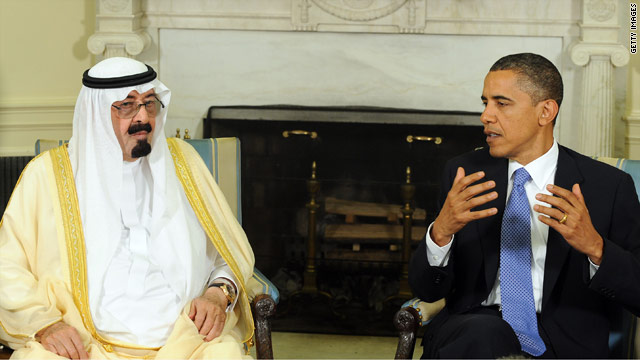 By Ellen Laipson, Special to CNN

Editor’s note: Ellen Laipson is president and CEO of the Stimson Center, a nonprofit and nonpartisan international security think tank. The views expressed are her own.

Following recent meetings in Saudi Arabia, U.S. Secretary of State John Kerry said, “Our relationship is strategic, it is enduring and it covers a wide range.” But his Saudi counterpart, Foreign Minister Saud al-Faisal, politely acknowledged differences with the United States, stating that “a true relationship between friends is based on sincerity, candor and frankness.”

The Saudi foreign minister tried to tamp down talk of a major rift, based on recent pronouncements by senior Saudi officials that conveyed a deep frustration in Riyadh about international cooperation on the key issues facing the Middle East: the Syrian crisis, the Palestine question and Iran’s nuclear ambitions.

The Saudis have staked out positions on each issue that do not align with major world capitals, highlighting the limits of the kingdom’s efforts to shape the regional environment and project Saudi power and influence. And, as the kingdom expands its global role and seeks recognition as a more independent actor, its reliance on the United States is understandably under stress.

But while disagreements over crisis management in the region have long been part of the U.S.-Saudi relationship, which still has a broader strategic purpose involving global energy security and preventing an outside hegemon from dominating the region, Saudi relations with the United Nations are now also fraught with confusion. After lobbying hard to win a rotating seat on the U.N. Security Council, Saudi Arabia decided it did not want to be a member of the club that was so feckless on Syria, and so declined the seat. (Although it has tried to make amends by praising the U.N.’s humanitarian work and insists it has not given up on the institution).

More from GPS: Upsetting Saudi Arabia may not be a bad thing

On Syria, the most acute issue, the Saudi position in spirit converges with that of other nations: President Bashar al-Assad must go. But in practice, the Saudis take a one-dimensional approach with little room for diplomacy or compromise. Saudi Arabia insists that the United States should have followed through with its threat to strike the Syrian regime; that the Syrian opposition needs more lethal means to level the battlefield; and that any internal divisions among the opposition groups are of less consequence than the overarching goal of ousting al-Assad. At the same time, the Saudis show little sign of planning for a post-Assad government.

What’s behind the Saudi passion for regime change in Damascus? It could be linked to the strategic setback they experienced when a Shia-majority government replaced Saddam Hussein in Iraq. Having once supported the Syrian regime, the Saudis are now deeply committed to establishing a Sunni-majority government in Damascus, apparently regardless of the ideology of any new leadership. Regardless, Syria has become the straw that broke the camel’s back. The Saudis have long been dismayed, if not disdainful, of Western countries’ failure to achieve meaningful progress on the Arab-Israeli front and while their criticism is aimed largely at the U.S. and its inability to moderate Israeli behavior, it is equally harsh on the United Nations as an institution.

Iran is a more existential issue for the Saudis. There is little relief for the Saudis at the prospect of an improved atmosphere for nuclear talks, suggesting that it’s Iran’s enduring power and size that matter, not the particulars of its nuclear activities.

Having pledged to prevent the full nuclearization of Iran, the United States is newly suspect in the eyes of the Saudis for giving diplomacy a chance. The Saudis have lurched between wanting closer security cooperation with Washington to deal with the Iranian threat and fearing that the U.S. will be lured into a new strategic relationship with Iran at their expense.

Each of these issues relates to the Saudi attitude toward the international system more broadly, not just its disappointment with Washington’s foreign policies. As a rising power, finding a comfortable role in global governance is not always a smooth process.

Saudi Arabia’s power in the international system derives from its energy and financial clout. A member of the G20, Saudi Arabia is one of the smallest in terms of population (only Australia is smaller). In addition, Saudi Arabia is one of only three nations in the G20 (along with Indonesia and Argentina) that do not belong to other major global economic groupings.

Of course, some rising middle powers work hard to be useful at the multilateral level, to expand their influence beyond their region and to develop new political capabilities to shape the international agenda. South Korea, for example, sees multilateralism as a means to achieve more global influence and to makes its brand known beyond its Asian neighborhood. Ironically, though, Saudi Arabia’s attitude to multilateralism looks more like that of its archrival Iran – both countries want respect and recognition at the global level, but are deeply mistrustful of the institutions created by the great powers, and see the established rules as flawed and biased.

Saudi Arabia’s other unique attribute is its soft power, which derives from its role as custodian of Islam’s holiest places. Ultimately, Saudi diplomacy will need to manage multiple roles that are not working together smoothly lately: its instinct to assert regional leadership with absolutist positions on the neighborhood’s conflicts, its desire to be recognized as an independent global actor, not subservient to the interests of its Western partners, and its intangible power as advocate for Sunni Islam.