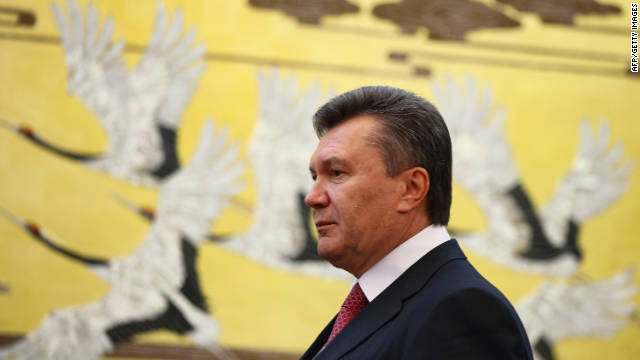 By Anna Borshchevskaya, Special to CNN

Editor’s note: Anna Borshchevskaya is a fellow at the European Foundation for Democracy. You can follow her @annaborsh. The views expressed are her own.

Later this month, the European Union’s Council of Ministers will decide whether to sign Ukraine’s European Union Association Agreement at the Eastern Partnership Summit in Vilnius, ten days later. If the European Union agrees to offer the Ukraine formal association, it will eliminate most barriers to trade between Ukraine and the European Union, and boost Ukraine’s economy.  More importantly, the agreement would allow Ukraine to take a big step closer to Europe and away from Russia. It would be a historic shift.

In anticipation of Vilnius, Moscow has increased pressure on Ukraine, Moldova, and other neighbors to join the Russia-led Customs Union. And, because a country can’t both sign an association agreement with Europe and join Russia’s Customs Union, Ukraine must choose.

The Council of Ministers’ decision about Ukraine will come down to whether Ukrainian President Viktor Yanukovych will pardon former prime minister and political rival Yulia Tymoshenko, jailed since 2011 on politically-motivated charges. Tymoshenko’s imprisonment is symptomatic of the corruption, electoral fraud, and selective justice in Ukraine in recent years. Her release is not simply a matter of justice for one individual, but rather whether Ukraine accepts the most fundamental values of the community of democracies it wishes to join.

Yanukovych’s ambition may work in Europe’s favor – he may sympathize more with Russia than his predecessors, but he knows that if he chooses Russia over the European Union, he might lose the March 2015 presidential election.

Of all post-Soviet countries, Ukraine is perhaps most significant to Russia. Historically, Russia draws its very creation as a state to Ukraine. The two countries share deep historic and cultural ties. For Russian President Vladimir Putin – who once famously declared that Ukraine is not even a state – losing Ukraine would be akin to losing a crucial part of Russia.

And Ukraine may simply be the tip of the iceberg. Moldova could also initial an association agreement this month. During a trip to Moldova in September, Dmitri Rogozin, Russia’s deputy prime minister, warned that it would be “a grave mistake” for Moldova to seek European integration. Upon concluding his visit, Rogozin threatened to cut Moldova’s gas, on which the landlocked country is entirely dependent. “We hope that you will not freeze,” he reportedly said. The same month, Russia banned Moldovan wine, and for good measure suspended Lithuania’s dairy imports in October, even though Lithuania is already a European Union member.

One country has already fallen victim to Putin’s bullying. Armenia, which appeared set to be on a European integration course after concluding in comprehensive trade agreement with the European Union in July, made an abrupt reversal in September and instead joined the Customs Union after a meeting between Putin and his Armenian counterpart Serzh Sargsyan. Putin probably made Sargsyan an offer he couldn’t refuse: Russia, with deep and multifaceted control in Armenia, is also the only guarantor of Armenia’s security, and therefore, was easy pickings for Putin.

Yet for all of Putin’s bullying, and his recent diplomatic efforts in the Middle East,  his actions only mask a weakness at home. Russia’s neighbors are resisting his pressure. As Vilnius draws nearer, it’s therefore important for the United States not simply to sit idle, but to use its diplomatic influence to encourage Ukraine and other East European states to look West toward Europe, to an alliance of democracies, rather than East, to Putin’s idea of a Soviet Union 2.0.