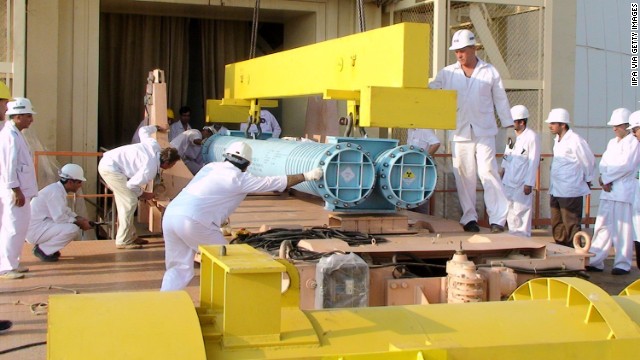 Editor’s note: Michael Rubin, a resident scholar at the American Enterprise Institute, is the author of Dancing with the Devil, a history of U.S. diplomacy with rogue regimes. The views expressed are his own.

U.S. Secretary of State John Kerry returned to Geneva on Friday amidst speculation that marathon talks might yield a nuclear deal, or at least an agreed framework for future talks. Should the two sides come to an agreement, both the State Department and the White House will hail the breakthrough, even as they caution that they will re-impose sanctions should Iran violate the deal. That would be an empty threat. As North Korean leader Kim Jong-un, Syrian President Bashar al-Assad, and Palestinian President Mahmoud Abbas can attest, diplomats don’t abandon a process once begun.

The Iranian nuclear portfolio has stymied diplomats for well over a decade. The Iran issue was the first crisis outside the borders of Europe on which the European Union took the lead. EU officials hoped to show that diplomacy and multilateral organizations could be more successful than cowboy unilateralism. The crisis accelerated in 2005 when, after several warnings, the International Atomic Energy Agency (IAEA) found Iran in non-compliance with its Nuclear Non-Proliferation Treaty safeguards agreement. The diplomatic center of gravity then shifted to New York, where the U.N. Security Council passed a series of resolutions, many by unanimous vote, imposing increasing sanctions on the Islamic Republic. Both the United States and European Union augmented these sanctions with increasingly broad unilateral measures targeting both Iran’s oil industry and its currency. Collectively, the sanctions had effect.

By any Western standard, Tehran has every reason to come in from the cold. The Iranian economy is in shambles. In September, the Iranian Bureau of Statistics announced that the Iranian economy, already weak, had shrunk 5.4 percent over the previous year. Inflation upon basic foodstuffs is high. According to the Iranian Central Bank, over the past year, the price of bread increased 38.8 percent, dairy products were up more than 50 percent, and the price of tea increased over 58 percent. Smokers – and Iran is full of them – suffered even greater sticker shock. The price of tobacco nearly doubled in a year.

The problem is that the Iranian leadership does not operate by Western standards. Seldom does the Iranian government place the wellbeing of its population above its own revolutionary ideology. The Supreme Leader considers himself the Deputy of the Messiah on Earth. Sovereignty comes from God; what the Iranian people may think is beside the point.

Iranian officials will certainly say what is needed to relieve sanctions, but the Iranian leadership has no intention of giving up its nuclear ambitions. On February 9, 2005, Hassan Rouhani gave a speech entitled “Iran’s Measures Rob the Americans of Foresight,” in which he outlined a doctrine of surprise. The Islamic Republic achieved repeated victories over the West because “the actions of the regime took the world by surprise.” In 2009, Rouhani bragged about dividing and deceiving the West in order to advance Iran’s nuclear program. If at first you succeed, try, try again.

Deception is not hard when an adversary wants to be deceived. The West celebrated Rouhani’s phone call with Obama – never mind that on October 2, according to Iranian radio, Rouhani backtracked on his willingness to compromise in his own press conference back in Tehran. Diplomats applauded hints that Iran might close the underground nuclear facility in Fordo, never mind that the same day Western sources reported the possible concession, Iran’s nuclear chief ruled it out. The State Department breathed a collective sigh of relief when Supreme Leader Ali Khamenei appeared to bless Rouhani’s diplomacy by calling for “heroic flexibility,” never mind that his aides quickly clarified that he endorsed only a change in tactics, not a change in policy. For his part, Foreign Minister Mohammad Javad Zarif declared to the Iranian press Thursday that “the Islamic Republic of Iran makes no deal over its [nuclear] right.”  Kayhan, a newspaper whose editor Khamenei appoints and often serves as his voice, last month ridiculed the notion of confidence-building with the West.

It appears Iran has not made any deal that would curtail its nuclear ambition. As described, the framework upon which U.S. and Iranian negotiators appear to agree fails to resolve those issues of most concern to regional states. Obama has unilaterally waived Security Council resolutions demanding a complete enrichment cessation. There may be some enrichment suspension at key sites but, as Rouhani bragged in 2009, he used an early suspension to install new and better centrifuges. And while Iran might convert some more highly enriched uranium to less usable fuel rods, it has backtracked its own earlier proposals to ship fissile material abroad.

Of even more strategic concern, the deal does not address Arak. On Thursday, a German court sentenced four businessmen who sold components to Iran for that plutonium-producing plant. When Arak becomes operational within a year, it can produce enough plutonium for two bombs per year. Nor has Iran made any concession on Parchin, where Iran conducted weapons research. In short, Kerry can arrive back from Geneva and declare triumphantly, “I have in my hand a paper signed by Mohammad Javad Zarif,” but the agreement does not stop Iran from assembling the material or know-how needed to make a bomb. There is no truth and reconciliation component to the deal: Iran needs not come clean on its previous activities. If the regime had truly has a change of heart, such transparency should not be an issue.

Diplomats may celebrate a deal, but a bad deal can be worse than no deal. Sometimes, the hangover is not worth the celebration.

Topics: Iran • Nuclear
Next entry »Our year of living disastrously
« Previous entryLight at the end of the tunnel for DRC?

Next entry »Our year of living disastrously
« Previous entryLight at the end of the tunnel for DRC?