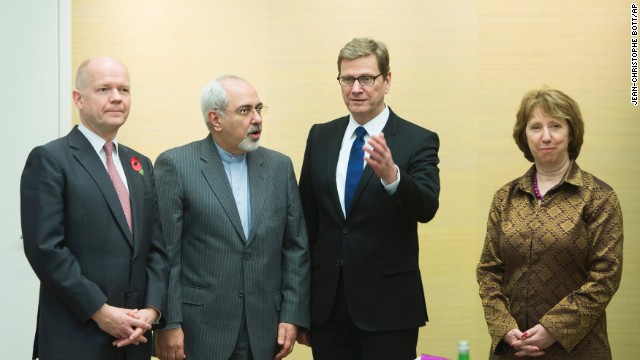 CNN speaks with Fareed about the failure to reach a deal at the weekend over Iran's nuclear program, and why some countries are so opposed to an agreement. This is an edited version of the transcript.

So what is your take on all of this? The talks fell apart over the weekend. What's your take?

Well, remember, this was always going to be hard. The United States and Iran haven't talked since 1979. There hasn't been any kind of deal on the nuclear program for ten years. But it seemed to me what happened was they almost got too close too quickly.

There was a sense in which it seemed like the deal was going to happen and then a number of countries that have problems – Israel started lobbying from the outside without even knowing what was in the deal, and then, most centrally, France decided to break ranks. Very strange move, publicly breaking ranks. The French probably have a number of motives. It's always fun for the French to be anti- American and to distance themselves from the Americans.

They're also trying to signal to Saudi Arabia and the emirates, the Gulf states that don't like Iran, that they are the tough guys here. Because France has a lot of commercial business, particularly arms business with Saudi Arabia. So there's a whole bunch of motives there. But I think it was largely because we got so close faster than anyone thought we would.

Don't you want to sit down at the negotiating table with complete unity from your side before you even start talking to Iran? Is that part of it?

The French wanted to send a signal, as I say, to Saudi Arabia and to the emirates, that they were the tough guys. I think they would have found a way to object no matter what. Remember, this is a good example of personality and all that stuff doesn't make that much difference because John Kerry loves the French. They love him. He speaks French fluently. This is about national interest, cold and calculating.

Now back here at home, Secretary Kerry is going to be going to the Hill to talk to the Senate asking for more time for negotiations to happen before anyone considers any more sanctions. There’s general agreement these sanctions have worked at this point against Iran. Bob Menendez is the chairman of the Foreign Relations Committee. He's pushing for further sanctions. He thinks that they're going to work and they would actually serve as an incentive. Does Secretary Kerry have a tough job here at home convincing people that he can get this done?

He has a tough job. It's not clear that it will actually pass in the Senate. But the way to think about it is, you know, we have been telling the Iranians, don't create facts on the ground. Don't create new facts on the ground that make these negotiations more difficult. Don't complicate our lives by doing things that would suggest that you don't have goodwill.

More from GPS: Why some Iran deal critics may want talks failure

Well, we often forget it works both ways. We also shouldn't create facts on the ground and create complications for the negotiation. Both sides have to show that during this process of negotiation, you have goodwill and you're not trying to add further obstacles to the process.

And just looking at it kind of from the outside, the big view, you have the main players all sitting down over the weekend to try to hammer this out. It didn't happen. It's debatable who's at fault that it didn't happen. But now, when they go back to the negotiating table, it's one notch down in terms of who's going to be sitting down at that table. Does that mean that chances for a deal come November 20 when they head back to Geneva are slim?

It's not clear. I think that most importantly, the Iranians are going back to Iran, to Tehran to get clearance, I think, on some of these thorny issues.

Do you think that could help or hurt?

It would help in the sense that probably the foreign minister didn't have the authority to make a decision on a few crucial issues. If he goes back and if gets that authority, he comes back renewed. On our side, it allows the French and the Americans to get on the same page. But here's the fundamental problem, which is no deal is one where we're going to get the full loaf.

And what you're listening to in Congress is a little worrisome, because at the end of the day, in any negotiation, you have to make concessions. The position of John McCain and Lindsey Graham and Bob Menendez seem to be we shouldn't have to make any concessions. Well, that's not negotiation, that's asking the other guy to surrender. And it's not clear to me that we understand that we're going to have to move from our position.

More from GPS: Bad Iran deal worse than no deal

You suggested at the weekend that some of the critics of this potential deal think that no deal is better. Are you suggesting that maybe they want the military option as the only solution here?

Any kind of deal will still leave Iran with a very serious nuclear establishment. We know that. Iran has over 1,000 scientists who are working on its nuclear program, and they are allowed by the IAEA to do that kind of thing.

So I think a lot of people look at this and say yes, you can have inspections, yes, you can have certain kind of constraints. But at the end of the day, that still leaves Iran with what’s called a breakout capacity, the ability within a few months or maybe within six months to achieve weaponization. That is a capacity that Japan has, that many countries that have civilian nuclear energy programs have.

For those kinds of people, and I am thinking of Prime Minister Benjamin Netanyahu in Israel, they are really worried that any kind of capacity is too much. And in that circumstance, I think they would rather have a kind of road to a crisis, which would force either the United States or perhaps Israel to take military action.

Of course, it’s not just Israel. If you speak to the Saudis privately or if you speak to the United Arab Emirates or the Kuwaitis or in Qatar, they are almost as nervous as the Israelis about these negotiations.

So the political back drop behind which all this is happening, as you well know, is a very deep schism in the Muslim world between the Shias and the Sunnis. The big Sunni powers are Saudi Arabia, the UAE, Egypt, all the countries you mentioned, that are very suspicious of Iran. And this schism is playing itself out in Syria, in Iraq, where each side supports militias of their sect. And so Iran is seen as the ultimate Shia power.

My own view is that the United States and the West should not get caught in fighting local battles for these people. We should be looking at this from the point of view of is Iran going to be a threat to the world, to the region, and how do we prevent that? We can make a deal on nuclear weapons. We can't change the complexion of Iran and make it Sunni or Shia, and we shouldn’t get into that battle. So, the Saudis have deep anxieties about Iran that go back centuries before its nuclear program.