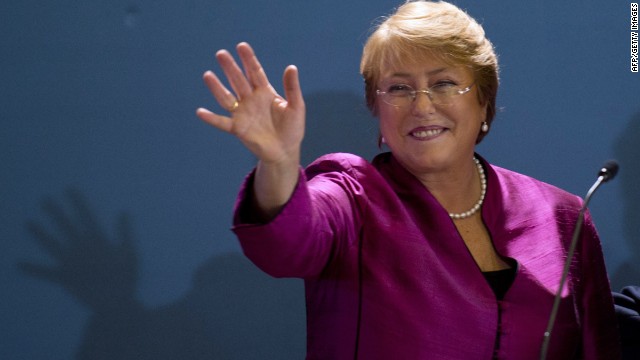 Can Bachelet lead Chile to change?

By Matt Browne and Dan Restrepo, Special to CNN

Four decades since the military coup that brought Chile a dictatorship under General Augusto Pinochet, Chile stands poised to enter a new chapter in its history. But obstacles from its past still stand in the way.

Is the scene set for a dramatic show down?

Actually, not really. When Bachelet left office five years ago, she did so with the highest approval ratings of any Chilean politician in history, above 85 percent. Only the Chilean constitution, which prevents sitting presidents from standing for re-election for a consecutive term, removed her from office. Today, polls suggest that almost half the population will vote for Bachelet in the first round. Matthei garners a mere 14 percent of the vote with the remainder being split by smaller independent candidates.

Depending on turn-out – this is the first election without compulsory voting – Bachelet may well be elected without a second round run-off.

So what are the big issues at stake Sunday? First, whether Bachelet’s coalition, Nueva Mayoria, can win a large enough majority in the Senate for her to be able to push through a reform agenda; and second – and related – whether she will be able to channel the energy of recent civil unrest into a sustainable movement for change.

Chile’s electoral system, drawn by Pinochet in 1980, casts a long shadow.  The system is designed to produce stalemate. It pushes parties into coalitions from the center to the left, and from the center to the right, while simultaneously skewing each coalition’s representation. Unless one side wins over two-thirds of the vote in a particular constituency, each takes one of the two seats available.

Without a large majority, many Chileans fear Bachelet’s new government will be paralyzed. To enact political reform, constitutional reform, and much-needed education reform, she will need a two-thirds majority in the Congress and Senate. Without such margins, there’s a very real possibility a reform agenda will be blocked or slowed by an "old-school" Congress and Senate.

Confronted by these challenges, Bachelet has used her campaign to begin to build a credible new politics in Chile, one that embodies a new approach to campaigning and governing. To overcome skepticism in the ability of Chile’s politics to match the country’s challenges, Bachelet began early in her campaign to shape a narrative that is about a permanent movement, headed by, but not reducible to, her leadership.

Mobilizing social media and new online organizing techniques, a story is developing that underscores that real change requires everyday Chileans to be mobilized and engaged on election day and beyond to pressure and push leaders and politicians while in government too.

During the primary vote earlier this year, indications were positive. Nueva Mayoria’s voters turned out in much larger numbers than their competitors on the right, and Bachelet won more than 70 percent of votes cast. A similar performance this weekend, and she may well be on the road to building a credible movement for change.

The real test, however, will be whether a President-elect Bachelet can maintain the campaigns momentum and channel its energy heading into office.