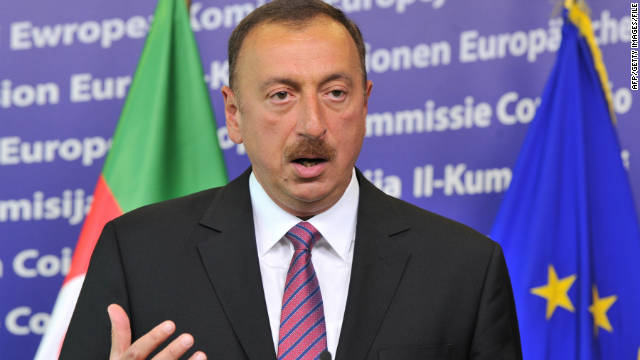 Don't write off Azerbaijan just yet

By Matthew Bryza, Special to CNN

Editor’s note: Matthew Bryza is a former U.S. ambassador to Azerbaijan and is now director of the International Center for Defense and Security in Estonia and a senior fellow at the Atlantic Council’s Patriciu Eurasia Center. The views expressed are his own.

When a Western ally holds a presidential election that falls short of international standards, should we write it off? Or should we take a sober look at steps we can help the country take to meet our expectations?

That’s the question raised by the recent presidential election in Azerbaijan, an ancient civilization undergoing breakneck modernization just 22 years after its independence from the Soviet Union.

Granted, President Ilham Aliyev faced no real competition for a third term and election observers from the Organization for Security and Co-operation in Europe were particularly sharp in their criticism of the electoral process. Making matters worse, the Central Election Commission appeared to announce results before voting began when a smartphone app developer allegedly tested its election software with false results.

But this is only part of the story. President Aliyev is genuinely popular. Two years ago, when I served as U.S. ambassador to Azerbaijan, independent polls reported Aliyev's approval rating at between 83 percent and 86 percent. These numbers, perhaps unimaginable for a Western political leader, reflect the support he enjoys for delivering what Azerbaijani citizens crave most: stability.

Azerbaijan nearly collapsed in the early 1990s: the country was gripped by poverty and had just suffered a humiliating military defeat by Armenia in Azerbaijan’s region of Nagorno-Karabakh. In 1993, a democratically elected president resigned and voluntarily handed the job to Azerbaijan's Soviet-era leader and the current president’s father, Heydar Aliyev. This transition is viewed in Azerbaijan as a moment of national salvation, even by many oppositionists. Azerbaijanis recognize that the elder Aliyev's bold decisions to defy Moscow and connect Azerbaijan's oil and gas fields to the West were critical to securing the country’s independence and economic growth.

Aliyev has built on that success. GNP has tripled since 2006, while poverty has dropped from 49 percent to just over 6 percent; reformist economic policies have helped catalyze the growth of Azerbaijan’s non-energy sectors. Still, even as the economy grows, many younger Azerbaijanis aren’t satisfied with a monopolistic system they see as limiting opportunity and social justice. Facebook activists and journalists who call for the government's demise are often met with confrontation.

Corruption also persists. Yes, the cliché says, “a fish rots from the head.” But, in reality, rot spreads through the entire fish all at once. While Western analysts have documented elite corruption, they have focused little on how corruption permeates Azerbaijan’s grassroots.  Corruption in the education system is particularly debilitating. Students are compelled to pay for grades; those who can afford it resort to private tutors for real learning. As a result, Azerbaijan suffers shortages of qualified doctors and other professionals, while young Azerbaijanis learn the wrong ethical lessons: I will never forget the high school senior who told me that her parents demanded she obtain the same “right” as her peers to cheat on her graduation examination.

Fortunately, a reformist wind may be blowing. Last spring, the legendarily corrupt minister of education was replaced by a young reformer. Other positive changes are underway as well: The publication of fees for expedited services and the advance of electronic government have eliminated many under-the-table payments. Prominent businesspeople recently told me they’re suffering fewer shakedowns by customs and tax authorities, while two of the largest holding companies are elevating their business practices to prepare for future initial public offerings.

The West has a significant strategic interest in supporting Azerbaijan’s reform efforts.

On security, less than 24 hours after the September 11 attacks, Azerbaijan offered U.S. military aircraft unlimited over-flights, and subsequently emerged as a crucial resupply corridor for one-third of the non-lethal supplies for coalition forces in Afghanistan. Cooperation on counterterrorism has also been exceptional, thwarting attacks to save many American lives, including my own.

Azerbaijan is also an important energy partner, currently supplying nearly 700,000 barrels per day of oil to European and global markets, including 40 percent of Israel's consumption. Within five years, an international consortium will begin delivering natural gas from Azerbaijan to Greece, Albania and Italy, diversifying the European Union’s natural gas supplies away from Russia.

Thinking strategically about Azerbaijan doesn’t mean sacrificing Western values. Struggling reformers in Iran can look for inspiration to neighboring Azerbaijan, also a Shiite-majority country but one in which a 1,400 year-old Jewish community enjoys strong state support and where women gained the vote a year earlier than their American sisters. The United States and its European allies would be wise not to write off Azerbaijan, and instead pursue the full range of interests – and values – they share with this small, but strategically significant country.