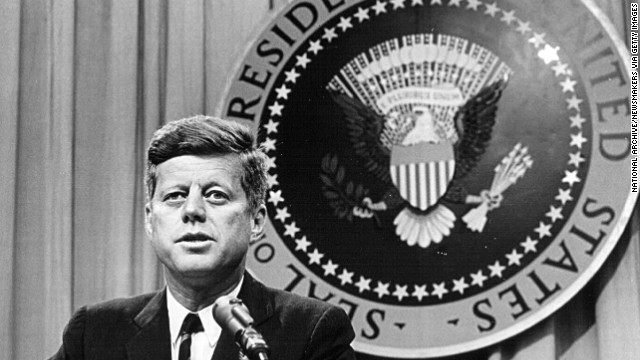 What we can learn from JFK’s leadership

Editor’s note: Jeffrey D. Sachs is director of the Earth Institute at Columbia University and author of To Move the World: JFK’s Quest for Peace.  The views expressed are his own. This is the first article in a series on America’s identity and image since the assassination of John F. Kennedy.

We celebrate John F. Kennedy a half-century after his death for the confidence he gave us in meeting great challenges.  “Our problems are man-made; therefore, they can be solved by man,” he told us.  And we believed him.  At a moment when the U.S. government seems unable even to launch a website, we recall Kennedy’s boldest commitment: to launch a man to the moon and bring him back safely to Earth within the decade.  That remarkable moment in American history, one that virtually defined my own childhood years, still inspires us to shake off our dour pessimism today.

While it’s all too easy to believe in government failure today – what with the failed Iraq and Afghanistan Wars, NSA spying, the Obamacare rollout, shutdowns, sequesters, and more – the public perception was nearly the opposite a half-century ago.  The federal government was friend, not foe. Franklin D. Roosevelt’s government had organized the New Deal, steered democracy through the Great Depression, and then triumphed over fascism in World War II.  The federal government had invented the nuclear age in the Manhattan Project, hardly the work of a technological slouch.  Most importantly for most Americans in the 1950s and early 1960s, the U.S. government was the bulwark against the aggressive designs of Stalin and the Soviet Union.

Kennedy won the 1960 election and governed on the basis that the federal government represented and embodied the skills and aspirations of the country at large.  Society would meet the greatest challenges of the age not through the works of our era’s supposed hero, the mighty lone entrepreneur, but through the efforts of the citizenry united in purpose and willing to take on the great causes.  We would do so boldly and unstintingly, and not just for ourselves but for all around the world who looked to us for help and support.  As Kennedy said in his inaugural address:

“To those peoples in the huts and villages across the globe struggling to break the bonds of mass misery, we pledge our best efforts to help them help themselves, for whatever period is required – not because the Communists may be doing it, not because we seek their votes, but because it is right. If a free society cannot help the many who are poor, it cannot save the few who are rich.”

The U.S. space program can also be seen in that light.  For Kennedy, the race to the moon was proof of what the United States could accomplish as a nation: winning the space race with the Soviet Union; demonstrating technological mastery to all the world; and developing new technologies and systems that would serve us in countless ways, from weather forecasting and communications to defense.  Yes, it was about pride and prestige, but of the real kind, won through great accomplishment.

More from CNN: Kennedy, Obama and the moon

Even at a distance of half a century, the panache of Kennedy in launching the race to the moon still startles. Following the Soviet Union’s triumph in Yuri Gagarin’s historic orbit of the earth in April 1961, which itself was followed within days by the U.S. military and PR debacle at the failed Bay of Pigs invasion of Cuba, Kennedy determined to step up the U.S. efforts in space to win the race of technological mastery and accomplishment.  That he did so was extremely bold.  How he did so was even more riveting.

On May 25, 1961, in an address to a joint session of Congress, Kennedy declared that

“[T]his nation should commit itself to achieving the goal, before this decade is out, of landing a man on the moon and returning him safely to the earth. No single space project in this period will be more impressive to mankind, or more important for the long-range exploration of space; and none will be so difficult or expensive to accomplish.”

Everything is remarkable about this commitment, everything that would make it nearly impossible today, until that is a leader of Kennedy’s ilk comes around again.  Most importantly, it was an incomparably huge goal, and with a date certain, but as yet without a clear plan to achieve it. Kennedy was leading not just the public, but also the engineers at NASA, backing them with ample financial resources and with his confidence that they could get the job done.

It’s remarkable that on that day in the spring of 1961, the engineers of the Apollo Project that would eventually fulfill Kennedy’s vision had not even settled on a sketch of how it might succeed.  Some engineers proposed what was called Direct Ascent, meaning a direct ascent to the moon and then back.  Others proposed an Earth-Orbit Rendezvous, in which components of the moon shot would be launched into Earth orbit and then assembled for the follow-up moon flight.  The third option, Lunar-Orbit Rendezvous, called for a direct shot to lunar orbit, followed by a module that would land on the moon and return to the lunar orbiter for the flight back to Earth.  It was more than a year after Kennedy’s address to Congress that the third, and ultimately successful, approach was settled on as the NASA strategy.

More from CNN: 5 things you might not know about Kennedy assassination

It is with this in mind that we can see the awesome truth of Kennedy’s famous speech at Rice University in 1962, when he considered the question asked by many, “Why…the moon? Why choose this as our goal?”  His answer is as remarkable as any we’ve heard from national leaders before or since:

The truth is that the U.S. government still accomplishes many great things, and can accomplish many more in the future.  In our own era, the U.S. government has deciphered the human genome, spurred the information revolution, deciphered the human impacts on the Earth’s environment, and furthered the exploration of space, including the remarkable exploration of Mars by unmanned Rovers.  Yet these breathtaking achievements are often obscured by the torrent of ideological assaults against government and its capabilities.

If we cut through the blather and misdirection of our era’s corporate-fed propaganda, we’d indeed see an even deeper truth.  In our age, we will need the federal government’s leadership to fight human-induced climate change, old and new disease scourges, and the mobilization of technologies to raise the quality and lower the costs of healthcare and education.  These goals can be accomplished, and much more.  And as we take up these causes and win these battles, we will once again be inspired by Kennedy and his belief in the capacity of humanity to solve even the toughest problems.  As he put it in his Peace Speech in June 1963:

“No problem of human destiny is beyond human beings. Man's reason and spirit have often solved the seemingly unsolvable, and we believe they can do it again.”