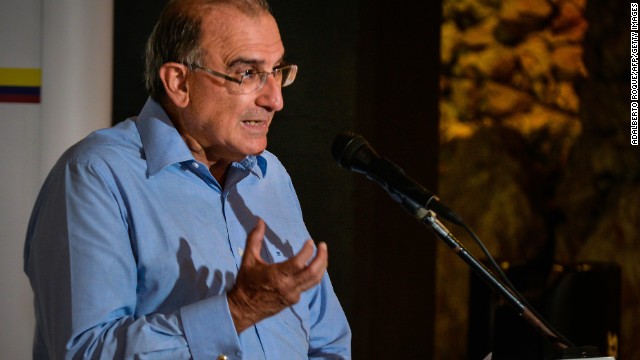 Can Colombia build on its democratic opening?

By Oliver Kaplan, Special to CNN

Editor’s note: Oliver Kaplan is an assistant professor at the Josef Korbel School of International Studies at the University of Denver. The views expressed are his own.

A year ago today, peace negotiators in Colombia began working with the Revolutionary Armed Forces of Colombia (FARC) rebel group to end a nearly 50-year bloody conflict, one that by some estimates has claimed the lives of over 200,000 Colombians and forcibly displaced over 4 million more. Although the government and rebels have continued to fight during talks, there is a sense of optimism after progress came on a long-running sticking point: political participation. Indeed, the lead government negotiator, a former vice president, has hailed the breakthrough as a “new democratic opening.”

So what exactly has changed?

True, there were some anxious months after talks stalled following a deal in May on land reform issues. But the latest breakthrough calls for new rights for political opposition movements, in addition to citizen participation and input in policymaking. This progress has sparked optimism as much for the manner in which it has come about as for the shift itself.

This is literally not your grandfather’s peace process. To resolve the grave conflict of the 1950s known as The Violence, which took the lives of an estimated 220,000 Colombians, talks among Colombia’s main political parties occurred far away, in Spain. And although the 1956 Benidorm Pact ended the worst of the partisan killing and was eventually ratified by a plebiscite, it was crafted by elites, without public input.

In contrast, today’s negotiations have been much more participatory than past negotiations. The talks have been held closer to home, in Havana, with negotiators shuttling back and forth to Colombia. There has also been participation and input during the negotiations, not just for a final seal of approval. Public forums were held in Bogotá and regional peace tables were held around the country. Colombians also directly submitted more than 5,000 comments to negotiators through an internet platform, while the final agreement is to be ratified by a public vote. Such a level of public engagement is no surprise given that in 1997, at the height of the conflict, millions of Colombians voted for a “mandate for peace” to push for negotiations.

Still, the government has been performing a balancing act: encouraging enough participation for input through formal channels, but not so much that it derails the talks or advantages the FARC in mobilizing public support. It will therefore be a good omen if the level of encouragement of participation during the negotiations is sustained upon reaching an agreement.

However, there are challenges to doing so.

The first contentious question is how to incorporate FARC and leftist representatives into mainstream politics. The previous attempt to incorporate the FARC into politics in the 1980s resulted in the assassination of members of the Patriotic Union party by paramilitary groups, making the provision of security guarantees a key issue today. Allowing the FARC into politics is also controversial because some members have been accused of war crimes. With this in mind, questions surrounding amnesty are to be discussed under a future agenda item on ending the conflict.

Second, beyond a FARC political movement, a more fundamental question concerns the participation of the historically excluded rural sector, the interests of which the FARC claims to represent. It is said Colombia’s constitution is so liberal and democratic it is comparable to Switzerland’s, but this has at times been more true on paper than in practice. Without expanding and sustaining political participation, a lasting peace will be elusive, as underdevelopment in the countryside will persist and peasants will remain vulnerable to recruitment by criminal bands or other armed groups.

The experience after The Violence is again instructive. The National Front pact called for the two main political parties to alternate in power and also created mechanisms for participation including village-level community action boards (or juntas comunales), the most common form of social organization in Colombia today. Yet the national level political alternation and instability, along with creeping clientelism and corruption, meant the viewpoints of peasants were coopted and marginalized by politicians.

This exclusion became a rallying cry for spoiler insurgent groups, including the FARC (yes, the same FARC with which the government is negotiating today, some 49 years later). Yet despite the exclusion, I found in my research in the Colombian countryside that these resilient village organizations continued to advocate on behalf of communities, implementing public works and even shielding residents from armed group pressure.

Clearly, the breakthrough on participation rescued the peace talks, and it suggests a model for peace processes in other countries. But this democratic opening alone isn’t enough to cement a peace deal.  If Colombia is to achieve peace and also live up to its democratic potential, sustained grassroots participation must remain at the forefront.