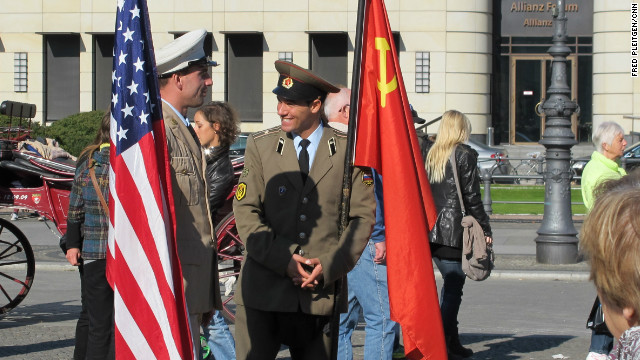 Editor’s note: Bruce Stokes is director of global economic attitudes at the Pew Research Center. The views expressed are his own. This is the second article in a series on America’s identity and image since the assassination of John F. Kennedy.

The world may have breathed a sigh of relief after President John F. Kennedy and the Soviet Union managed to avoid nuclear Armageddon during the Cuban Missile Crisis. But America’s rise in the 50 years since President Kennedy was killed has been far from trouble-free – and America’s international standing since the fall of its great Cold War rival has reflected the ups, downs and uncertainties of the past five decades.

When the Cold War ended, U.S. strategic hegemony, and more broadly the American brand, appeared poised for prolonged preeminence. With the Soviet Union in shambles, followed soon thereafter with the implosion of Japan’s economic bubble, America’s standing in the world seemed unchallenged and unchallengeable. But in the ensuing quarter century, the U.S. image has been on a roller coaster ride. And China has emerged as a new rival in the eyes of the world.

There is little consistent, publicly available opinion data on global views of the United States prior to the first decade of the 21st century. In the early 1980s, a Newsweek poll found that most people surveyed believed America’s global influence was expanding. But that was not necessarily a positive sentiment. With a possible U.S.-Russian nuclear confrontation still very much on people’s minds, majorities in many countries said America’s strong military actually increased the chances for war. And just a quarter of the French approved of U.S. policies. The situation was only slightly better in Japan and Germany.

In 1991, in the immediate wake of the fall of the Berlin Wall, majority views about the United States were generally upbeat in much of Eastern Europe and in Germany. Roughly three-quarters of Poles and Hungarians, and two-thirds of Bulgarians, Czechs and West Germans viewed the influence of the United States as a good thing, according to a survey by the Times Mirror Center for the People & the Press.

By the end of the decade, there was generally favorable sentiment about the United States in many countries. Overwhelming majorities in Poland (86 percent), Britain (83 percent), Germany (78 percent), Japan (77 percent) and Italy (76 percent) gave Uncle Sam a thumbs up, according to surveys by the U.S. State Department.

Yet by 2002, in the wake of the September 11, 2001 terrorist attack on the World Trade Center and the ensuing “war on terror” launched by the administration of U.S. President George W. Bush, America’s image had begun to erode, according to the first Pew Global Attitudes survey. U.S. favorability dropped in countries where it was already moderate or weak: in Turkey (to 30 percent, down 22 percentage points since the beginning of the decade) and in Pakistan (down 13 points). And while the U.S. image remained healthy in many other nations, it had slipped in Germany (down 18 points), Britain (down 8 points) and in Poland (down 7 points). Ironically, perhaps in a sign that Cold War animosities were a thing of the past, Russian support for the United States actually rose to 61 percent, up 24 points.

The numbers show that the Bush years were generally not good for America’s standing in the world. Opposition to the U.S. invasion of Iraq and perceived American foreign policy unilateralism sapped good will toward Washington. By 2007, favorability of the United States had fallen by 30 points in Germany, 26 points in the Czech Republic and stood at just 9 percent in Turkey (down 21 points). Meanwhile, only a third of Chinese and 41 pecent of Russians had a positive view of their chief rival.

Interestingly, even before Bush left office, America’s standing in the world had begun to rebound. In 2008, the median was up to 46 percent and by 2009, with the election of Barack Obama as president, U.S. favorability rose to 59 percent in the 11 countries with comparable data, roughly equaling America’s standing in 2002.

But this “Obama bounce” was a decidedly mixed phenomenon. Europeans were generally quite taken with the “new” America. The U.S. image jumped 33 percentage points from 2008 to 2009 in France and Germany, and 25 points in Spain. It also increased 26 points in Indonesia and 22 points in Mexico.  Yet its image in the Middle East and North Africa remained stubbornly weak – U.S. favorability hardly budged in the Middle East in 2009, with only 14 percent of Turks, 15 percent of Palestinians and 27 percent of Egyptians seeing the United States positively. True, U.S. favorability stood at 63 percent across 39 nations surveyed by the Pew Research Center. But the reality is that the U.S. image abroad has tailed off somewhat in comparable countries, in part a casualty of unrealistic expectations about President Obama.

All this said, U.S. favorability is only one measure of national standing, and U.S. soft power provides some additional and useful insight into how America is perceived around the world.

In a Pew Research Survey undertaken last year, a median of 71 percent of people surveyed in 16 European, Asian and Middle Eastern countries admired U.S. technological and scientific advances, while two-thirds said they liked American movies, music and television. Attitudes toward U.S. ideas about democracy and ways of doing business were more mixed, but global publics were more positive toward both than in the final years of the Bush administration.

So, did the fall of the Soviet Union herald an age of unbridled U.S. soft power supremacy? Not exactly – even in countries where U.S. soft power has a strong appeal, there were serious concerns about “Americanization.” A median of 70 percent said it is bad that U.S. culture has been spreading to their country. (Although a similar 2013 Pew Research poll in seven Latin American nations and six African countries found strong appeal for U.S. technology and pop culture).

The dissolution of the Soviet Union and the end of the Cold War ushered America’s principle post-war rival off the world stage. But U.S. preeminence was short lived, a victim of both Washington’s foreign policy initiatives undermining America’s brand and the rise of China. The upsurge in U.S. favorability in the wake of the 2008 presidential election and signs that this now may be tailing off are a reminder of the current volatility of America’s international image. And prolonged negative sentiments about the United States in much of the Middle East suggest ongoing challenges for public diplomacy in the region. Yet one abiding sentiment is the continued popularity of at least some aspects of American soft power.

Ultimately, if there is any lesson to be learned about America’s standing in the eyes of world publics since the end of the Cold War, it is that a snap shot belies the reality of a moving picture. The U.S. global brand is constantly evolving – sometimes for better, sometimes for worse.

Next entry »What I'm reading: The problem with U.S. health care
« Previous entryCan Colombia build on its democratic opening?