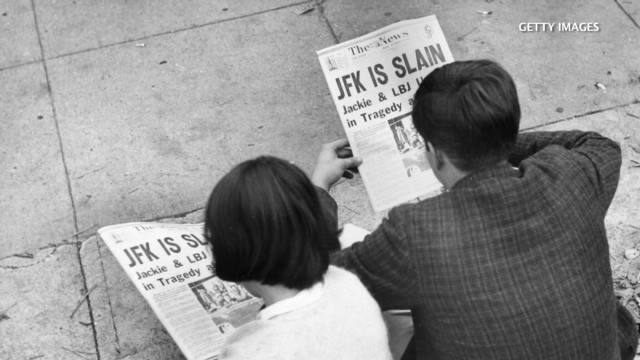 The roots of American conspiracy theories

By Jesse Walker, Special to CNN

Editor’s note: Jesse Walker is managing editor of Reason magazine and the author of The United States of Paranoia. The views expressed are his own. This is the third article in a series on America’s identity and image since the assassination of John F. Kennedy.

For 50 years, every poll on the subject has shown at least a plurality, and usually a majority, of Americans believing John F. Kennedy was killed by a conspiracy. A 2008 survey sponsored by CNN and Essence suggested that 58 percent of the country believes a conspiracy killed Martin Luther King; for black Americans, the figure was 88 percent. A 1996 Gallup poll had 71 percent of the U.S. agreeing that the government is hiding something about UFOs – not necessarily alien bodies, you understand, but something.

Yet for all this, America is not unusually suspicious. Conspiracy stories flourish all over the world, some of them far less plausible than the notion that more than one man was involved in the King or Kennedy killing. As I write, Europe is undergoing one of its periodic panics about international child-stealing gypsy conspiracies. Over the summer, the prime minister of Turkey blamed a global plot for the protests against his government. Last year, the host of Nigerian Idol lashed out at the local press for reporting that he was a high-ranking member of the Illuminati. In Iran, it is apparently considered savvy to claim that the Holocaust was a hoax. The fear of conspiracy isn’t the property of any one nation – it’s more like a universal human trait.

But if Americans are not unique in being suspicious, it’s true that we can be suspicious in distinctive ways. Every country’s conspiracy stories reflect that country’s culture, and that’s as true of the United States as any place else. There is an American style of paranoid politics.

We were a frontier nation. It is common for a community to fear plots from rival powers. As settlers arrived in the Americas, though, that fear took on a different shape. Suddenly those rival powers didn’t just include the other empires of Europe; they included the Indian nations, which were perceived as something wilder and stranger.

The colonists reacted in an interesting mixture of ways. On one hand, they tended to project their own social structures onto the natives, as though the Iroquois Confederacy wasn’t all that different from France: Settlers mistook decentralized networks for centralized states, loose alliances for empires, influential Indians for grand conspirators. On the other hand, there was a tendency to imagine the natives as something alien and demonic. Hostile tribes, the New England minister William Hubbard wrote, were led by “ministers of Satan,” all “actuated by the Angel of the bottomless pit.” When the people of Salem, Massachusetts, started seeing witches everywhere, the Puritan leader Cotton Mather suggested that the colony’s Indian enemies were behind the spiritual attacks. Even one of the most familiar conspiracy fears – the idea that a high-ranking official is guilty of treason – took on a distinct character when the specter of the Indians was invoked. When the Dominion of New England was at war with the Wabanaki, for example, disgruntled soldiers whispered that Gov. Edmund Andros was in league with the enemy and had “bought them thither to be a sacrifice.”

The frontier was closed at the end of the 19th century, but it left an imprint on the American imagination. Any enemy that seemed to be based in the wilderness, from the jungle fighters of the Viet Cong to the al Qaeda networks based in the AfPak mountains, can be and has been described in terms that echo the rhetoric of the Indian wars. And when alleged allies at home are accused of helping the enemy – well, just Google “George W. Bush” with “9/11,” “sacrifice,” and “conspiracy.” You’ll find that the suspicions that dogged Gov. Andros haven’t really gone away; they’ve just found new figures to settle on.

We’re a democracy. Citizens in many nations have fallen into the fear that low-class subversives are trying to undermine established institutions. That has been true in America, too. But because we were founded as a relatively egalitarian republic, those anxieties have often involved a cabal imposing rather than removing a rigid hierarchy. Most infamously, 19th-century nativists believed that the pope was plotting to remake the republic in his church’s image; immigrants from predominantly Catholic countries, such as Italy and Ireland, were imagined as the Vatican’s fifth column. If tales of Indian conspiracies embodied the settlers’ fear of the anarchic New World, these stories embodied their fears of the aristocratic Old World they left behind.

Now that democracy has spread around the globe, that anxiety is much more common outside the United States. (Anti-Muslim sentiment in Europe sometimes take a similar form, for instance.) But because our forefathers were pioneers in democratic government, they also were pioneers in worrying about ways it might be subverted.

We think we’re special. When the Puritans arrived in New England, they believed they were on an errand to build a New Jerusalem – in John Winthrop’s famous words, a city upon a hill with the eyes of the world upon it. That phrase has been quoted many times since, often by people who believe in American exceptionalism: the popular notion that this country is a unique experiment that marked an unprecedented break with the past.

What does that have to do with conspiracy theories? Just that there is a long tradition of believing in a benevolent conspiracy working behind the scenes to elevate society. In 17th century Europe, for example, a series of popular pamphlets described an alleged secret society called the Rosicrucians, an invisible college of alchemists and philosophers working to create a new age of enlightenment.

In America, that concept of the invisible college collided with the idea of the exceptional nation. Stories spread, especially in New Age circles, that some sort of secret society decided long ago to create an enlightened empire in the western hemisphere. Everything from Columbus’ voyage to the Declaration of Independence to our victory in World War II was said to have their fingerprints on it.

We’ve got the CIA. By this point, some readers are probably grinding their teeth and getting ready to shout “BUT WHAT ABOUT THE CONSPIRACIES THAT ARE TRUE?” And those readers have a point. The word conspiracy exists for a reason, after all. People really do conspire.

Those real-world conspiracies in turn affect what other conspiracy stories people are willing to believe. If you were an American following the news in, say, the 1970s, you would have seen a parade of reports exposing serious misbehavior in the CIA, the FBI, the IRS, the Pentagon, and, of course, the Nixon White House. Naturally, this fed theories that imagined still more misbehavior at the CIA, the FBI, the IRS, the Pentagon, and the White House. Just as the French or the Greeks have conspiracy theories that reflect real scandals at French or Greek institutions, Americans have conspiracy theories that echo real scandals at American institutions.

But in this respect we are not necessarily as different as you might think. The U.S. is the most powerful country on the globe, after all, and our institutions have a much longer reach than those headquartered in Paris or Athens. Foreigners might not worry much about the FBI or the IRS. But the CIA and the NSA are feared far from American shores. And out there, like here, some of those suspicions are not actually paranoid at all.