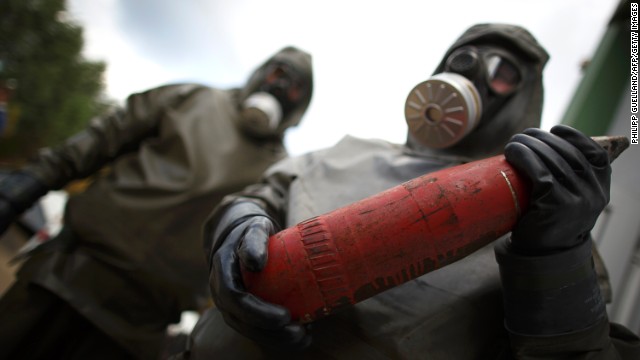 Editor’s note: Barry M. Blechman is a distinguished fellow at the Stimson Center, a nonprofit and nonpartisan international security think tank. The views expressed are his own.

The world will be a safer place if the surprising agreement that led to the promised destruction of Syria’s stockpile of deadly chemical weapons can pave the way for the banning of such weapons from the entire Middle East and eventually the world.

The next move is up to Israel and Egypt.

Syrian President Bashar al-Assad surprised the world in September when he agreed to sign the Chemical Weapons Convention barring the use of such weapons and to permit the supervised destruction of all his chemical weapon stocks. The move was designed to halt an expected U.S. bombing campaign against his country after al-Assad used chemical weapons against his own people in the Syrian civil war.

While things could certainly go south in a Damascus minute, so far Syria has carried out its pledge to declare the amounts, types and locations of its lethal chemicals. Inspectors from the Organization for the Prohibition of Chemical Weapons (OPCW) have confirmed the declaration and placed the materials under seal, and also destroyed Syria’s means of producing new chemical weapons. The group also said last week that it had approved a road map for the destruction of Syria’s chemical weapons by the middle of next year.

A total of 190 nations have ratified the Chemical Weapons Convention, while Israel and Myanmar have signed but not ratified the treaty. Ratifying the treaty would require that Israel declare if it has chemical weapons and – if so – to identify the locations, types and amounts of the weapons, just as Syria has done. Israel would then have to prepare a plan for the supervised destruction of any chemical weapons it has under the watchful eyes of the OPCW.

More from CNN: Will Syria hide some weapons?

If it has no chemical weapons, Israel need only declare that fact and accept the possibility that OPCW inspectors would have the option to check chemical plants that produce toxic materials for commercial purposes – such as some insecticides – to ensure the materials were not being diverted for weapons use. All other members of the Chemical Weapons Convention accept the same possibility of inspections.

My guess is that Israel does not have chemical weapons. Given the murder of millions of Jews in Hitler’s gas chambers, there is a particular repugnance within the Jewish state for such weapons. Iranians, who lost tens of thousands of soldiers and civilians to chemical weapons in their war with Iraq in the 1980s, are also repelled by such weapons.

Moreover, Israel has no need for chemical weapons. It has a small but diversified arsenal of nuclear weapons that presumably provide a more than sufficient deterrent against others’ weapons of mass destruction.

Why then hasn’t Israel ratified the Chemical Weapons Convention?  Perhaps it fears that its policy of “opacity” concerning nuclear weapons would come under greater pressure if it were open about its possible chemical weapon stocks. Or perhaps it does not want to establish the precedent of inspections on its territory.

More from GPS: A smarter way to stop Syria WMD

In addition, elimination of the possibility that they maintain chemical weapons might be seen by Israeli decision-makers as putting more pressure on their nation to eliminate its nuclear arsenal.

If Israel were to accede to the Chemical Weapons Convention, Egypt would be the only nation in the Middle East remaining outside the treaty. A decision by Egypt to give up its chemical weapons might be more difficult than Israel’s, as Egypt doesn’t have nuclear weapons. But what good are its chemical weapons, really?

If Israel signed the treaty banning chemical weapons, perhaps Egypt would follow. Egypt would likely not see military value in maintaining its chemical stocks and recognize that eliminating these weapons from the Middle East would focus a harsher world gaze at Israel’s nukes.

Conceivably, a state with reasonably cordial ties with both Israel and Egypt could quietly broker an agreement in which both, unilaterally, took the steps necessary to fulfill the commitments required by the Chemical Weapons Convention.

If Israel and then Egypt took this next step, the only states remaining outside the Chemical Weapons Convention would be those few that have no reason to refuse to sign and ratify (Angola, Myanmar and South Sudan), and one more – North Korea – that is likely to be more difficult to convince to join. Even so, eliminating chemical weapons from the Middle East – the world’s most unstable region – would be a huge accomplishment, both in reducing the risk that terrorists might acquire the weapons and in nudging the region a few inches toward a more stable future.

Humanity abhors chemical weapons. The leaders of Israel and Egypt have an opportunity to do some good for all our futures.