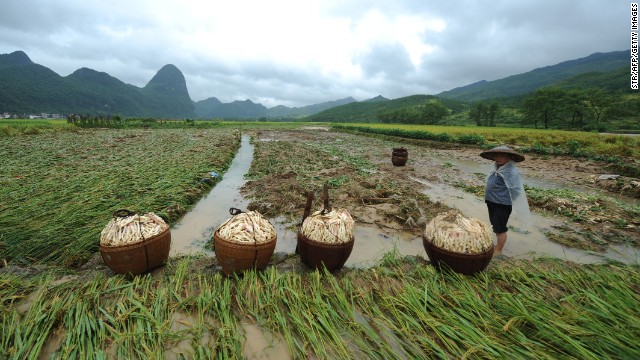 By Bruce Campbell, Special to CNN

Editor’s note: Bruce Campbell is the director of the CGIAR Research Program on Climate Change, Agriculture and Food Security, based in Copenhagen. The views expressed are the writers’ own.

Few people expected much concrete progress ahead of the ongoing international climate change talks taking place in Warsaw. Sadly, it seems the doubters were right to be skeptical as negotiators have failed to tackle one of the biggest climate challenges: changing agriculture technologies, practices and policies to make sure the world can feed itself.

When Typhoon Haiyan – one of the strongest tropical storms ever recorded – slammed into the Philippines, the world was given a brutal reminder about the need for urgent action, an urgency given a tearful face when the head of the Philippine delegation to the United Nations Framework Convention on Climate Change (UNFCCC) made an impassioned plea for action.

Haiyan devastated central Philippines, a mostly agricultural region. But while images of the damage focused on flattened urban areas, the storm also crushed farms and plantations that produce rice, sugar, coconuts, and other key crops. The Food and Agricultural Organization of the United Nations estimated that the typhoon, which struck at the beginning of the rice-planting season, destroyed hundreds of thousands of hectares of the country’s most important staple.

While directly connecting climate change and specific storms has always been difficult, it is easy to see the impact of these super storms on food security. In early October, for example, Cyclone Phailin plowed through East India with almost as much force as Haiyan. Damage to insured crops in the states of Odisha and Bihar alone has been estimated at $45 billion.

On a global scale, the accumulated potential impact of these storms on the world’s food supply is quite frightening. Yet while super storms generate the headlines, equally pressing tragedies are slowly unfolding on fields and farms across the developing world with relatively little attention. Farmers, especially small-scale farmers, are struggling to cope with a climate that is both shifting – the crops they grow now may not bear fruit in future weather conditions – and increasingly unpredictable, with drought one year and too much rain the next. They’re battling weeds, pests and crop diseases that will continue to spread to new regions.

But there is potential relief for even the world’s poorest farmers. With access to better seeds and fertilizer, better planting techniques and better technology to anticipate and plan for seasonal weather changes, they could survive. With strategies to manage their risk, such as diversifying crops or buying weather-based crop insurance, they could thrive.

One problem is that the process of growing food itself actually releases 7.3 billion to 12.7 billion metric tons of carbon dioxide – some 14 to 24 percent of total global emissions. Trying things like growing trees on farms and practicing low-till agriculture are therefore "climate-smart" because they can simultaneously increase production while minimizing environmental impact. These approaches are essential if we want to meet our food needs while preserving scarce natural resources and cutting our climate footprint.

The danger climate poses to agriculture – and, correspondingly, the threat our current approach to agriculture poses to the planet’s climate patterns – have been recognized at the Warsaw talks. A leaked draft report from the U.N. Intergovernmental Panel on Climate Change concluded that because of global warming, food production will flatten out, decreasing by as much as two percent every decade, failing to keep pace with rising demand, which is expected to increase by as much as 14 percent each decade.

And the risk for climate-driven hunger is greater in the tropical regions, where adaptive capacity has not kept pace with the impact of climate change. In vast parts of Africa, for example, the growing season will shrink by an estimated 20 per cent within two generations. Life is already extremely harsh in these areas; less food will be devastating.

Unfortunately, this looming agriculture crisis has not led to responsible action from climate diplomats. Over the past few years, U.N. negotiations have sidestepped the question of how to fund climate change adaptation for agriculture in the least developed nations, passing the buck to whatever forum takes place next.

Lost in this evasion is the United Nations’ potential to kickstart widespread analysis of the problem and potential solutions, such as cataloguing known climate impact on agriculture and assessing what still needs further research.

Most importantly, though, agriculture needs to take center stage when all national governments discuss climate change. The ever-increasing demand for food cannot be met by a shrinking capacity to produce food. The poorest people have the least amount of responsibility for climate change, yet already suffer the most from it. Negotiators need to devote their attention to the inextricable link between climate change and agriculture – not the opposite, which is what we are seeing now as climate negotiators focus narrowly on national interests and domestic politics.

More and more developing nations are moving forward and addressing the climate crisis with whatever resources they can cobble together. If climate negotiators continue to drag their heels, the rest of the world may simply leave them behind.