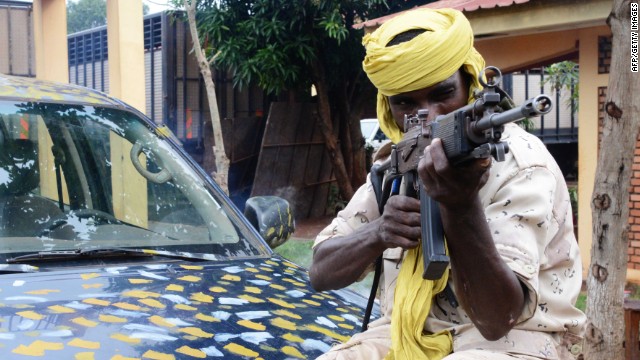 By Michael Shank and Madeline Rose, Special to CNN

Editor’s note: Michael Shank is director of foreign policy at the Friends Committee on National Legislation. Madeline Rose is legislative associate for foreign policy at FCNL. The views expressed are their own.

Despite dire warnings of anarchy, mass violence, and potential genocide, the White House has said nothing about the U.S. position on the situation in the Central African Republic (CAR). And while we appreciate the leadership of Representatives Ed Royce (CA-39), Chris Smith (NJ-4), and Karen Bass (CA-37) in raising awareness of the crisis within Congress. and welcome the November 20 statement by Secretary of State John Kerry, this level of engagement is insufficient.

The administration and Congress must engage quickly with the international community before more civilians are killed, and the country – and region – spiral further out of control.

The political-military crisis that the CAR has experienced since late 2012 has taken a dangerous turn. Since Seleka rebels seized the capital Bangui in March, CAR has slid further into violence and anarchy. On November 1, Adama Dieng, the U.N. Special Adviser on the Prevention of Genocide, asserted that violence in the CAR may already constitute crimes against humanity and war crimes. On November 13, John Ging, Director of the U.N. Office for Coordination of Humanitarian Affairs, warned: “We are very, very concerned that the seeds of a genocide are being sown.”

This is serious, and Washington should take it seriously, lest we end up with another preventable mass atrocity on our hands, and only grief and political regret to show for it.

Why should the U.S. act? First, we have a mandate to do so. Remember, the Obama administration committed the United States to strengthening its structural capacities to prevent mass atrocities and genocide. As the landmark Presidential Study Directive on Mass Atrocities stated, “[U.S.] security is affected when masses of civilians are slaughtered, refugees flow across borders, and murderers wreak havoc on regional stability and livelihoods.”

The directive also created new governmental structures to enable the U.S. government to act with greater expediency and coordination in response to early warnings and “red flags” of potential mass atrocity or genocidal situations. And the red flags could not be clearer in CAR.

Local religious leaders have issued pleas for international action. Humanitarian organizations, anti-genocide advocates, and key U.N. member states have expressed shared concerns about the threat of mass atrocities against civilians. Even two strictly apolitical entities, the International Committee for the Red Cross and Médecins Sans Frontières, have cautioned that violence is impeding their ability to deliver lifesaving humanitarian assistance.

Second, there are significant security implications at stake. CAR shares borders with six countries, several of which have received significant U.S. assistance and are also plagued by violent conflict. The country’s lawlessness and inability to control its borders has already attracted regional militia groups, including the Chadian rebel leader Baba Ladé, the Lord’s Resistance Army, heavily armed Sudanese poachers, and potentially actors from Nigeria and the Democratic Republic of the Congo. While the full scope of foreign activity in the conflict is impossible to track, conflict trends suggest that foreign engagement is increasing.

De-escalating and transforming the conflict now is critical to ensuring that CAR does not become a new ground for radicalization, arms trafficking and violent recruitment in already volatile region of the continent.

Finally, violence in the country has taken on more organized and interreligious tones. Over the course of the rebellion, violence has increased steeply between Muslim and Christian communities throughout the country. Ex-Seleka forces, local militia, the LRA, and other armed groups are intimidating and manipulating civilians into violence. As violence and rumors of violence spread throughout the country, it increases tensions, fears, and rumors and tears civilians across interreligious and interethnic lines that did not necessarily previously exits.

Seleka has reportedly increased its troop size from 5,000 fighters at the end of 2012 to now more than 20,000, and has broadly expanded its attacks on civilians and villages. Christian militias, known as anti-Balaka, have also emerged in many parts of the country and clashed with ex-Seleka elements. These attacks by anti-Balaka groups then, in turn, triggered violent reprisals by ex-Seleka forces. These dynamics create a perfect tinderbox for a transition to large-scale violence.

The United States must engage fully with the international community to help immediately restore stability to the country, protect civilians against potential mass atrocities, mitigate dangerous conflict trends, and protect space for lifesaving humanitarian assistance. Failure to act now, multilaterally, will make it harder and more costly in both lives and dollars for the U.S. to act later.

The business of waiting until a preventable conflict becomes an intractable crisis – as we did in Mali and Syria – cannot be our status quo. If we are in the business of prevention, the key is to engage early and often, not late and lackadaisically.  The people of CAR need us today, not tomorrow.

Topics: Africa
Next entry »What would JFK have done about Iran?
« Previous entryWhy Americans hate their government

Next entry »What would JFK have done about Iran?
« Previous entryWhy Americans hate their government